On Friday, June 19th, Chuck Moore from Comic Related interviewed me for The Related Recap podcast from the Heroes Convention floor in Charlotte, NC. We talk about some pulp titles that many Pulp Factory Employees will recognize. 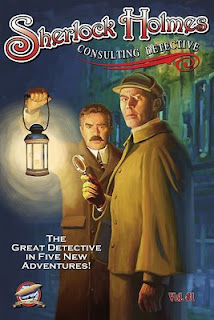 Airship 27 Prod., and Cornerstone Book Publishers are very excited to announce the release of their newest title, SHERLOCK HOLMES, CONSULTING DETECTIVE Vol. One.

Victorian England, a time of historical significance as the world was poised expectantly for the coming wonders and terrors of the new century. Amidst this atmosphere of anticipation and intrigue, one man emerged as a beacon of logic and cold, calculating reason in an unsettling time: Mr. Sherlock Holmes, Consulting Detective. Now he returns in five brand new mysteries by four of today’s finest writers.

A famous soccer player is found dead in the club house. An unidentified stowaway is murdered aboard a U.S. Navy warship, while another man is found asphyxiated in an empty, locked room. These are several of the twisted puzzles challenging the Baker Street sleuth as he once again takes up the hunt on the fog ridden streets of London accompanied, as always, by his faithful ally, Dr.Watson.

Writers Aaron Smith, Andrew Salmon, Van Allen Plexico and I.A. Watson have set forth exciting new mysteries done in the traditional style of the original Holmes stories by his creator, Sir Arthur Conan Doyle. There are no space aliens here nor howling werewolves, simply good old fashion whodunits. So arm yourself for danger and all manner of villainy as once again, the game is afoot!

This premier volume features a dramatic cover by artist Mark Maddox, with interior illustrations and design by Rob Davis. Edited by Airship 27 Prod. founder, Ron Fortier.
“Sherlock Holmes is clearly the most beloved fictional character ever created,” Fortier offered in discussing the new book. “We’ve assembled a collection of five terrific stories we are sure will entertain Holmes fans around the world.” 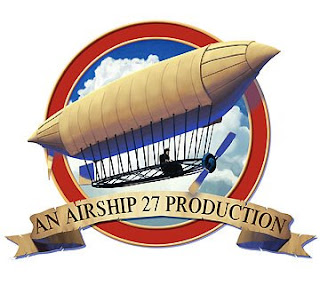 Hi Pulp Factory followers. Thought you'd all get a kick out of seeing Mark Maddox's wonderful redesign of our Airship 27 logo. Mark recently completed the cover to our latest anthology and suggested this retro-take because it better suited the star of the book. Rob and I couldn't agree more and voila. Although it will not replace our dirigible logo on most of our titles, those that fall into this period frame will have it. Thanks ever, Mark.
It really is sweet.
Posted by Ron Fortier at 8:14 AM 4 comments: 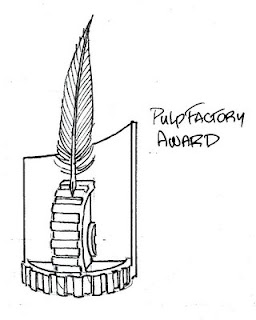 For the past two years, pulpwriter/editor Ron Fortier has been moderating the Yahoo Pulp group known as the Pulp Factory. It is currently made up of thirty-six members, among them writers, artists and devoted pulp fans. Recently the group decided it was high time to shed a public light on the resurgence of new pulp fiction and art that has exploded across the literary field.

With the advent of such companies as Moonstone Books, Age of Adventure, Black Coat Press, Airship 27 Prod., Wild Cat Books and Altus Press to name a few, there have been hundreds of new pulp short stories and dozens of original pulp novels released in the past few years to warrant serious attention and support. Yet the older pulp groups and organizations, some of whom do sponsor award programs, continue to recognize only past creators and ignore these talented newcomers who are revitalizing the entire pulp community. The Pulp Factory Awards were inaugurated to publicly support, encourage and applaud the creation of new pulp fiction and art.

There will be four separate awards handed out annually; Best New Pulp Short Story, Best New Pulp Novel, Best New Pulp Interior Illustrations, and Best New Pulp Cover Art. Starting in Jan. of 2010, the members of the Pulp Factory will nominate candidates in the four categories and then, after a final ballot is determined, cast their vote. Winners will be notified and public announcements made. Windy City Pulp & Paper Convention promoter, Doug Ellis, was thrilled and delighted to offer the 2010 Windy City show as the venue for the first ever Pulp Factory Awards presentation. The physical award is a small statue in the shape of interconnecting gears with a pen embedded into them; the pen symbolizing both a writing quill and drawing pencil. (See accompanying sketch.)

In making this announcement, Fortier wanted it made absolutely clear that the Yahoos Pulp Factory group is not affiliated with any one publishing company and all its members are freelancers who have been published by multiple outfits. All new pulp fiction and art published in 2009, regardless of the source, will be eligible for these awards. "All of our members are extremely excited about this program and anxious to get it under way," he said happily in a recent interview. "We think this is a good thing for all of pulpdom."

Any person or group wanting more information on The Pulp Factory Awards is asked to contact Fortier directly at (Airship27@comcast. net). They are very receptive to any positive support in this new venture.

A nod to Cornerstone Publishers

Just giving a nod to Cornerstone Publishers, the company currently publishing Airship 27 pulp books and my own children's and adventure novels. Check 'em out at the link below!
http://www.cornerstonepublishers.com/books/?page_id=8
Posted by The K.N.O. at 8:52 AM No comments:

Tip of the pulp fedora to Pulp Factory brother, Kevin Olson for reopening the PF Blog.
The group is in your debt, amigo.
Posted by Ron Fortier at 2:19 PM 1 comment: 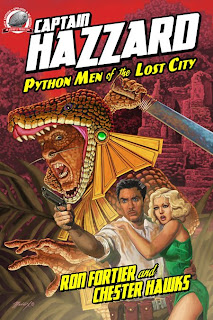 All right! We're back again. And to kick things off here's the cover to the latest release from Airship 27:
"The most intriguing character from the action pulps returns! This thrill-a-minute new edition is not merely a reprint of that solo 1938 classic, but a brand new relaunch of this long-forgotten pulp hero.

"This new, updated special edition contains:
• The completely re-edited and rewritten Captain Hazzard book "Python Men of the Lost City" by Ron Fortier to include new chapters not included in the 1938 book!

• New introduction and afterword written especially for this new edition."

Available at (www.gopulp.com)
Posted by Rob Davis at 1:04 PM 6 comments:

Greetings Pulpsters,
Welcom to the Pulp Factory, a blog for creators and fans of new 'Pulpstyle' stories. This introductory message will be brief, and its success depends on the members' participation. So please, enjoy, participate, and give this new incarnation life. As Doctor Frankenstein says, "IT'S ALIVE!"
Best,
Kevin Noel Olson
Posted by The K.N.O. at 10:43 AM 3 comments: