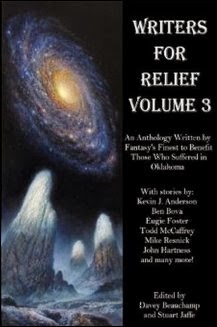 Writers for Relief Vol. 3 is edited by Davey Beauchamp and Stuart Jaffe.

All proceeds benefit the Oklahoma Tornado Survivors via the American Red Cross.

Bobby’s story in this anthology is called Magnus: The Apprentice. It tells the tale of young Andrew Kenny when he moves to a new town and discovers that not only was his grandfather a powerful sorcerer and protector of the planet Earth from demonic invasion, but that he shares those same gifts. When the villainous Lord Lucius Malfor threatens, Kenny has to learn how to use his powers to fight off a new invasion.

Posted by BobbyNash at 12:23 PM No comments: 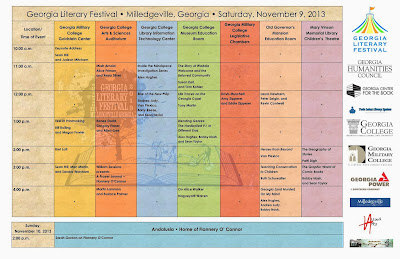 Just a reminder that The Pulp Factory's own  Bobby Nash, Van Allen Plexico, Sean Taylor, Andrea Judy, Barry Reese, and more at the 2013 Georgia Literary Festival, which is being held on November 9 - 10, 2013 in Milledgeville, GA. Panels take place on Saturday, November 9th. Click on the panel schedule grid above for a larger view.

You can learn more about this amazing event here and here.

We hope to see you there.

Posted by BobbyNash at 1:37 PM No comments:

THE CRIMSON MASK Vol One 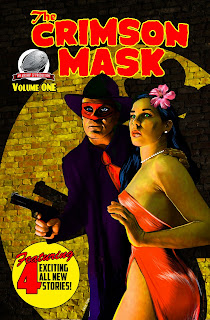 The Crimson Mask is back…and Airship 27 Productions has him!  This, the first in an on-going series, features four brand new adventures by some of today’s finest pulp writers.

Veteran Police Sergeant Clarke is gunned down by hoodlums, shot in the back of the head.  As he lay dying, a rush of blood to his face formed a macabre mask, a crimson mask!  When his son, Doctor Robert “Bob” Clarke, saw that strange stigmata he interpret it as a sign, inspiring him to become his father’s avenger, the Crimson Mask!

Once again Airship 27 Productions digs into the dusty vaults of long forgotten, second tier pulp heroes to revitalize another great character in brand new, exciting adventures.  Writers J. Walt Layne, Terrence McCauley, C. William Russette and Gary Lovisi took on the challenge of creating new, bizarre mysteries for the pharmacist turned crime-fighter and in doing so have put together a terrific collection of fast pace pulp action echoing the thrills of the original classics.

“All of which is why Airship 27 Productions exist,” reaffirms Managing Editor Ron Fortier.  “Specifically for great, fun characters like this one. Characters relegated to forgotten back files of the classic pulp hero ranks.  Well, not anymore.  The Crimson Mask always had the potential to be a something better, now our writers and artists are making that happen.”

Hold on to your fedoras, jump onto the running board and get ready for blazing thrills galore pulp fans as the Crimson Mask is back!

And as a $3 PDF download from the Airship 27 website.
(http://robmdavis.com/Airship27Hangar/index.airshipHangar.html)
Posted by Ron Fortier at 9:34 AM No comments:

The Pulp Factory's Bobby Nash joined Tommy Hancock on the latest episode of the PULPED! podcast. We talked about several of my books and upcoming projects. A fun chat. Give it a listen here.

PULPED! Favorite Bobby Nash joins host Tommy Hancock once again to update everyone on what's been going on in the Wild World of Nash since his last visit!  Listen as he talks Boxing, Masked Women, Sex in Pulp Then and Now, and so much more!  Barefoot Bones, The Green Ghost, and Domino Lady are just a few of the Cast of Thousands...Hundreds...Tens that get discussed as Bobby Nash Gets PULPED! Again!

You can listen to Bobby Nash Gets Pulped! Again here.
Or download direct here.

About PULPED! The New Pulp Podcast:
PULPED! is a Podcast dedicated to the creators and fans of New Pulp! New Pulp, heroic fiction by modern artists written with the sensibility and in the tradition of the Pulp genre! Pulp creators Barry Reese, Derrick Ferguson, Ron Fortier, and Tommy Hancock are the helmsen of this venture and will bring New Pulp discussion, guests, debates, news, and even New Pulp's very own spokesperson, The Pulptress, to PULPED! each week! If you like your fiction heroic, if you seek adventure and action in every word you read, then come on in, take a seat, and get PULPED! PULPED! will post each Monday!

Check out New Pulp on at www.newpulpfiction.com, Facebook, and Comic Related.

ALL MUSIC used in Pulp is under a Creative Commons License. Opening and closing themes performed by the Red Hook Ramblers. Other music, including that used in commercial production, by Kevin MacLeod (www.incompetech.com)

Posted by BobbyNash at 5:05 PM No comments:

THE QUEEN OF ESCAPES 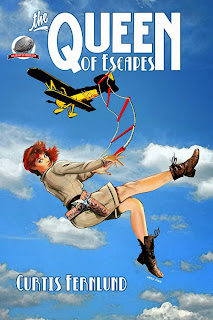 HATS OFF TO
THE SERIAL CLIFFHANGERS

Airship 27 Productions is absolutely thrilled to announce the release of their newest pulp novel, “The Queen of Escapes,” by Curtis Fernlund.

“I grew up seeing serials like Republic’s King of the Rocketmen weekly at the local movie house,” says Airship 27 Managing Editor Ron Fortier.  “I have such fond memories of those great melodramas and over the years have collected many of them on VHS and then DVDs.  Serials were pretty much the film version of the pulps which is why I was so excited about The Queen of Escapes when it landed on my desk.  Serial fans are going to love this one.”

The time is 1935. After a decade of fame as the Queen of the Serials, Hollywood actress Gloria Swann is dismayed to see her box-office numbers dwindling with each new production.  Desperate to reclaim her popularity, she bankrolls her own film project; an over the top jungle adventure to be shot on location in the wilds of the Amazon rainforests of Brazil.

After the crew and cast arrive at their isolated destination, a series of accidents occur threatening the lives of several of the players.  The main target of these unexplained mishaps is Swann’s younger stunt double, Angela Morgan.  She suspects there are evil forces lurking in the jungle that threaten their safety.  Her only ally in this belief is Karl Braun, the veteran stun coordinator.  When Gloria Swann mysteriously disappears, Angela may be the only hope the Queen of Escapes has to survive.

Writer Curtis Fernlund’s homage to the classic film serials of the yesterday is a rousing, fast paced adventure that speeds from one danger-filled cliffhanger to the next.  James Lyle provides marvelous illustrations and Andy Fish captures all the fun in his gorgeous cover painting, designed by Rob Davis.

Posted by Ron Fortier at 4:26 PM No comments: 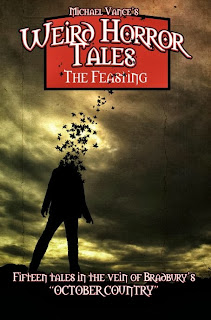 Michael Vance's Weird Horror Tales: The Feasting, the second book of his pulp firciton trilogy, has joined Weird Horror Tales in re-release by Airship 27 Productions. His second braided novel of fifteen interrelated horror, SF, and fantasy stories was also written in the style and tradition of pulp magazines in the ‘20s, ‘30s, and ‘40s.

Weird Horror Tales:The Feasting is easily one of the creepiest, most mesmerizing horror stories I have ever read. Months after finishing it, images and scenes continued to haunt me and their memories sent chills through me. This is not a book to read alone at night." said Ron Fortier, editor of The Feasting.

“My stories are founded on the premise that there is something larger than our narrow view of reality,” said Vance. “Each interconnected story shares setting, history, prominent families, and a macro plot. The stories also focus on the Azrealites, a religious cult that works tirelessly to reinstate that ‘Other’ on Earth through science and the occult.”

These stories about the fictional town of “Light's End” in Maine have been published in dozens of magazines in three countries. Vance’s influences on these stories are H. P. Lovecraft, William Faulkner, and Ray Bradbury.

The cover was done by France’s Christophe Dessaigne, a journalist, scenarist for role playing games, and photographer. Mainly influenced by the science fiction, horror, and fantastic genres, his atmospheric, surreal creations combine digital photography and manipulation in a dark and post-apocalyptic future.

The interior illustrations are by artist Earl Geier, best known for his horror, fantasy and science fiction artwork. In the role playing game industry, his work includes art for Battletech, Call of Cthulhu, and many others. He has illustrated books for Cemetery Dance magazine, Chaosium, Gryphon and Subterranean Press. For comic book, he's had work published by Dark Horse Comics, Comiczone, Now, Innovation and DC Comics Paradox.

Vance has written for national and international magazines, and as a syndicated columnist and cartoonist in over 500 newspapers. His six published novels include Forbidden Adventures, his Weird Horror Tales trilogy, Global Star, and The Equation. He briefly ghosted an internationally syndicated comic strip, wrote his own strip and several comic books. He is listed in the Who's Who of American Comic Books and Comic Book Superstars.

Weird Horror Tales and Weird Horror Tales: The Feasting are available for Kindle at: http://www.amazon.com/Weird-Horror-Tales-Feasting-ebook/dp/B00F9JYQE8/ref=sr_1_3?ie=UTF8&qid=1379971682&sr=8-3&keywords=Weird+Horror+Tales%3A+The+Feasting

Weird Horror Tales: Light's End will be reissued by Airship 27 in the near future.

Airship 27 publishes anthologies and novels in the pulp magazine tradition. In the past, Airship 27 has released “Sherlock Holmes: Consulting Detective”, a series of “Captain Hazzard” pulp thrillers, more pulp fiction in “The Green Lama” and “Secret Agent X”.

Posted by Ron Fortier at 8:03 AM No comments: