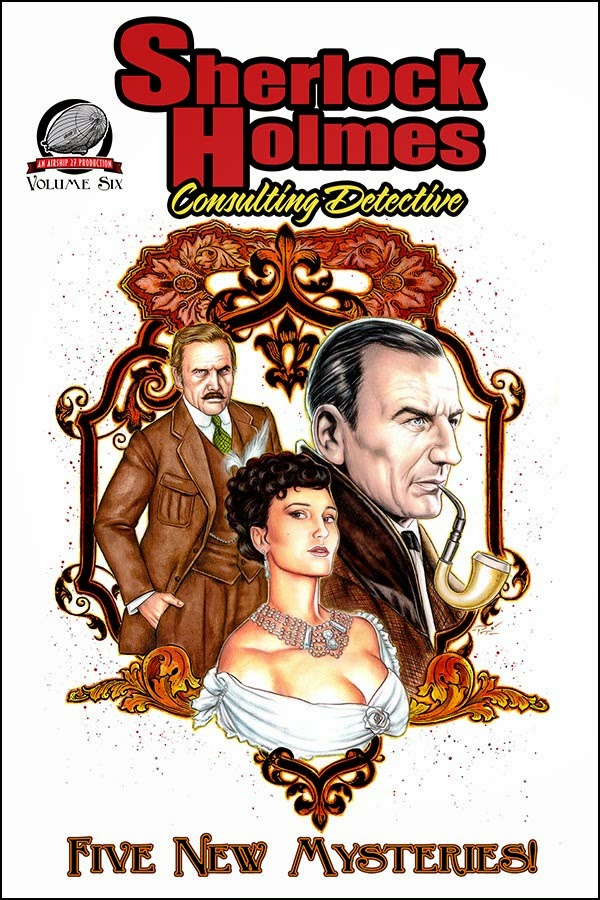 Airship 27 Productions is thrilled to announce the release of SHERLOCK HOLMES – CONSULTING DETECTIVE, Vol 6.   Here is another quintet of traditional Sherlock Holmes mysteries written in the style of his creator, Sir Arthur Conan Doyle.

Sherlock Holmes, arguably the greatest fictional character ever created, returns along with his faithful friend, Dr. Watson, in five brand new stories pitting his deductive skills against all manner of gaslight villainy.

A man awakens in a sanitarium claiming to be Dr. John Watson.  A young student is charged with the murder of his famous professor.  A Paris gang of jewel thieves brings the Great Detective to the City of Lights.  Murder in a London opium den unlocks the evil lurking within the estate of a prestigious British family and the ghost of Dr. Moriarty may have risen from the grave to challenge his Baker Street rival one final time.

These are the baffling cases documented here by writers Ian Watson, Michael A. Black, Alan J. Porter and Greg Hatcher; all guaranteed to keep Holmes fans intrigued and entertained from the first tale to the last.

“This continues to be our best selling series,” declares Airship 27 Managing Editor, Ron Fortier.  “The previous five volumes have all been hugely successful and still continue to be among the top mystery anthology sales at Amazon.”  In explaining the reason behind the overwhelming popularity of the series, Fortier credits the traditional format.  “All of the stories featured in our books are done in the Conan Doyle style.  There are no Martian invaders, no vampire scourges; just good old fashion Victorian mysteries as narrated by the unflappable Dr.Watson with the Great Detective employing his deductive skills to their utmost.”

And so the fog rolls in off the Thames, the clip-clop of Hansom cabs passes by and suddenly a shrill scream cuts through the night.  Once again the game is afoot!

Available from Amazon in both hard copy and on Kindle.

Posted by Ron Fortier at 6:51 AM No comments: 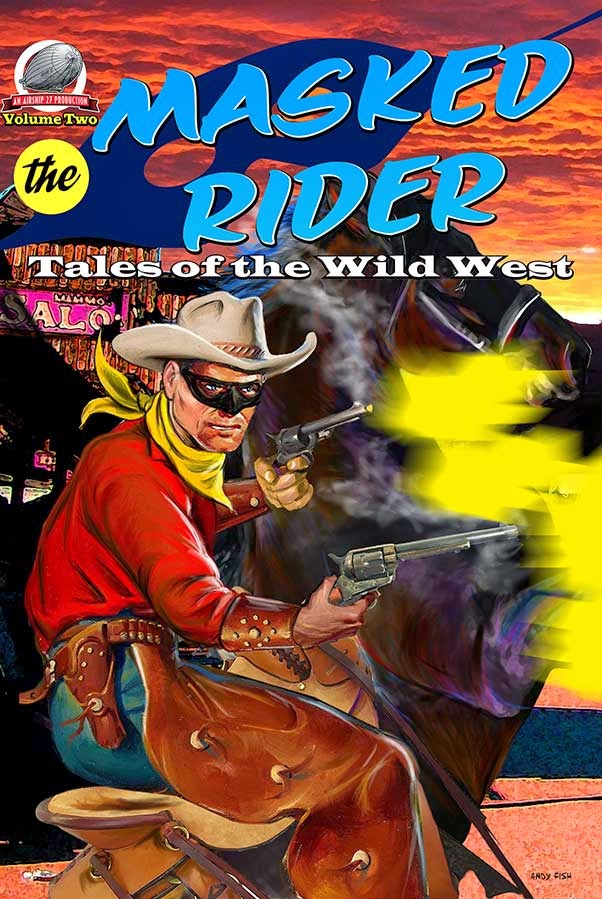 Airship 27 Productions is thrilled to put on its spurs and chaps to announce the release of its second Masked Rider anthology; THE MASKED RIDER – Wild West Tales Vol. II

After the bloody City War ended, the rugged landscape that was the frontier west was soon flooded by all manner of immigrants; from cowboys, pioneer settlers and an all manner of outlaws.  In their path the various Indian tribes desperate to save their lands.  Soon the mountains, plains and valleys echoed with the sounds of gunfire and bloodshed flowed like rivers in these lawless territories.

Then a masked man appeared on the scene, his twin Colts barking out justice.  He and his Yaqui partner, Blue Hawk, rode these endless trails protecting law and order wherever they went.  He was known as the Masked Rider and now he returns in three brand new gun-blazing adventures by writers Erwin K. Roberts, Bill Craig and Roman Leary.

“Our first volume was a mix of western heroes, both real and fictional,” elaborates Airship 27 Productions Managing Editor, Ron Fortier.  “This time our writers all wanted to write about this classic western pulp hero and we had no problems with that whatsoever.  He’s a great character to write.”  A popular figure in the days of the original pulps, the Masked Rider was one of the few that actually made it to the comics and appeared in his own title for many years.

So now it’s time to saddle up, pulp readers, for classic western action as only the Masked Rider can deliver.