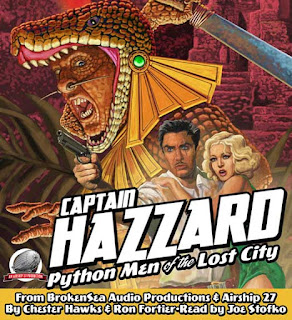 Airship 27 Productions & Dynamic Ram Audio are thrilled to announced the release of the first ever Captain Hazzard adventure, “Python Men of the Lost City,” as an audio book recorded by actor Joe Stofko.

In 2006 six, writer Ron Fortier realized a personal dream when he re-wrote the original pulp classic known amongst fans because it only produced one issue.  Although released under the house name of Chester Hawks, it is believed that pulp veteran Paul Chadwick was the true author of this Doc Savage want-to-be.

“Finding a facsimile reprint copy years go,” explains Fortier, “I was instantly enamored with the characters, especially Hazzard.  I could also see why the book failed.  Chadwick, better known for his Secret Agent X exploits, wasn’t at all comfortable with high adventure and the book is filled with plot holes galore.”  Fortier sat down, re-wrote the entire book and republished it via Ron Hanna’s Wild Cat Books.  It became an instant hit amongst the pulp community.  “I would challenge pulp fans to read the original and then my re-write,” Fortier chuckles.  “The response I received from those who did this was overwhelmingly positive.  Enough so that I started writing new Captain Hazzard novels.”

Later, Fortier and his partner, Art Director Rob Davis, parted ways with Wild Cat Books to start their own publishing imprint, Airship 27 Productions and quickly produced new editions of the book.  Earlier this year, Airship 27 joined forces with Dynamic Ram Audio headed by Sound Engineer Chris Barnes.  One of the titles chosen to bring to audio life was of course, “Catpain Hazzard – Python Men of the Lost City.”  The audio files run approximately four and a half hours.  There are plans to do CD versions in the coming months and make them available at various cons.

Fortier had high praise for Joe Stofko’s reading.  “Joe’s a professional actor and does a lot of theater.  His reading is full of passion and drama with a hint of the fun. That’s what I loved the most while listening to the tapes.  Joe brings the story to life with his reading and adds a completely different dimension to the experience.  No one could have done a better job with this.”

Now available at the Airship 27 Hangar Catalog site for $9.99! Direct link to the entry:

THREE AGAINST THE STARS 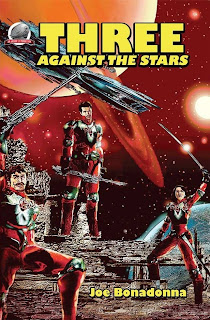 Airship 27 Productions is thrilled to announce the release of its 15th title of the year, a rousing new space opera; THREE AGAINST THE STARS by Chicago based writer Joe Bonadonna.  Best known for his sword and sorcery fantasies, Bonadonna now steps into a whole new arena to deliver a truly fast paced futurist pulp adventure.

On the distant alien planet of Rhajnara a conspiracy created by the facist Khandra Regime is set into motion to overthrow the rightful Rhajni Republic and instigate a policy of ethnic-cleansing.  The conspirators are cunning and it seems nothing in the universe can derail their mad apocalyptic scheme.

Nothing that is but three rambunctious Space Marines from the Third Regiment Company E of the United States Space Marines assigned to Rhajnara with the Terran Expeditionary Force.  Sergeants Fernado Cortez, Seamus O’Hara and Claudia Akira are the most unlikely trio ever to don jarhead camouflage and become military heroes.  To their superiors they are wild, reckless and incessant troublemakers always in the thick of things.  Yet their courage, loyalty and devotion to duty prove them to be the toughest Devil Dogs in the Corp.

Now, with the aid of a Medical Corpsman named Makki Doon, a young Felisian native proto-feline humanoid, these three futuristic musketeers are about to become the one factor capable of exposing the traitorous Khandra coup.  But to do so they will have to put their lives on the line one more time and risk all to save the day facing off against incredible odds.  To save an empire they will truly become…THREE AGAINST THE STARS.

“This is old school space opera,” cheered Airship 27 Productions’ Managing Editor, Ron Fortier.  “From Buck Rogers to the Space Patrol, the classic elements in this book make for a fun read from start to finish.”  The book features interior illustrations by the popular Pedro Cruz with a dynamic cover by Laura Givens and is designed by Art Director, Rob Davis.  “In the end, Joe Bonadonna delivers an action packed space opera fans of Edmond Hamilton and E.E. “Doc” Smith will not soon forget.”

In another week at Amazon & Kindle.
In two weeks from (www.IndyPlanet.com)

Posted by Ron Fortier at 4:33 PM No comments: 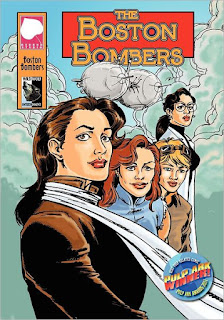 THE BOSTON BOMBERS is the story of an alternate world where Jesus was female and accepted as the Messiah by the Jewish people.  Where the last vestiges of the Roman Empire continued exist in South Africa and the center of the Catholic Church is located in Jerusalem.  After this reality’s World War One, the League of Nations became a military force to maintain peace throughout the globe.

Indra Devine and her all girl team are special agents of the League on a mission to uncover the machinations of the Roman Empire whose quest for world domination is once again being felt.  From politics to religion, from gun battles and giant airships, this epic saga has everything but the kitchen sink.

“I want to thank Sean Collins of Wild Wolf Entertainment for offering up this new edition to what we hope will be a much larger audience,” Fortier applauded enthusiastically.  “This is project has always been one of my personal favorites and we continue to sell lots of copies at pulp & comic shows every year.”

THE BOSTON BOMBERS is now available at – 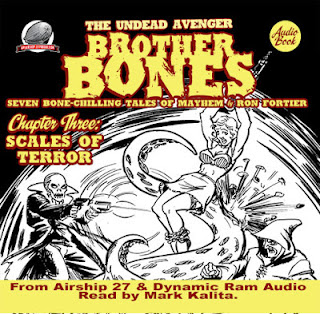 Airship 27 Productions, in conjunction with Dynamic Ram Audio, is thrilled to announce the release of their third audio recording based on the stories of the new pulp sensation, Brother Bones – The Undead Avenger by Ron Fortier.  Voice actor Mark Kalita returns to read this new entry called, “The Scales of Terror.”

"I was very excited to be chosen to bring Ron's Brother Bones stories to the audio medium,” Kalita says.  “These tales are so rich in the classic pulp fiction tradition with their noir atmosphere, gritty language and larger-than-life hero that you can't help but let yourself get pulled into the shadows of their delightfully dark recesses. Hopefully my readings will further enhance the imagery that Ron has so skillfully crafted to make them appeal both to fans of old time radio and modern audio books."

This short audio files are part of an on-going project to sell all seven of the Brother Bones tales from the Airship 27 Productions’ prose collection for the reasonable price of $2.  Once all seven have been recorded and made available, the entire audio book will be offered for the bargain price of $10.  “Response thus far has been truly wonderful,” reports Fortier, who is also Airship 27 Productions Managing Editor.  “We couldn’t be any happier with Dynamic Ram Audio’s quality on these recordings and Mark brings so much to the table.  His readings enhance the creepiness of each story.”

There is some definitive extra passion to this reading as Kalita went on to explain.  "Scales of Terror was particularly special for me to read because I'm a big fan of H.P. Lovecraft and the idea of doing a story about a secret cult and otherworldly beasties had instant appeal. Throw in Brother Bones and his particular brand of undead justice and it just doesn't get any better. I think listeners will also find Chris Barnes' special audio treatment really helps bring this tale an added dimension of cool creepiness."

BROTHER BONES – Audio Tales # 3 The Scales of Terror is now available for download at -(http://robmdavis.com/Airship27Hangar/index.airshipHangar.html#brobonesaudio3)

Posted by Ron Fortier at 8:13 PM No comments: 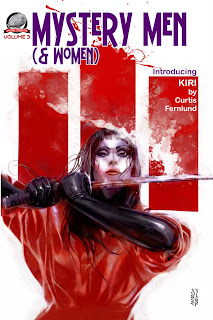 Airship 27 Productions is excited to announce the release of their third MYSTERY MEN (& Women) anthology celebrating the creations of brand new pulp heroes to follow in the steps of the classic avengers of old.  Managing Editor, Ron Fortier explains it this way, “After doing new stories of classic pulp heroes for nearly four years, many of our writers starting getting the itch to invent their own original pulp characters.  This anthology series addresses that need and has been a huge hit with all our readers.”

As in the first two volumes in this series, a quartet of today’s most ambitious pulp writers put on their creative caps and have whipped up four thrilling brand new pulp adventures crammed with wall-to-wall action. In MYSTERY MEN (& Women) Vol III we get to meet three brand new characters and have the pleasure of enjoying the return of a familiar character from volume two.

THE SKEIN - A black veteran of World War One returns home to the bayou country only confront an evil practitioner of the voodoo magic is turning living people into lifeless zombies.  Donning his old doughboy uniform and a gasmask, the Skein is born to protect the innocent and defeat the wicked, written and created by Kevin Noel Olson

THE BROWN RECLUSE – Next, in the grand tradition of the old pulp magazines comes a new series that focuses not on the stalwart heroes of the tale but rather on its dastardly villain.  A mad scientist whose genius is capable of inventing the most bizarre weapons, the Brown Recluse has but one goal in mind, the complete domination of all mankind under his heel. He is the invention of writer by Greg Gick

KIRI - A beautiful female samurai comes to New York in the early 1930s employed as the personal aid to a newspaper business woman wanting to clean up the city from vice and corruption.  Along the way, Kiri stumbles on a white slavery ring connected to a former ally who murdered her teacher back in Japan.  Suddenly her mission becomes that of personal vengeance and before it is over blood will be spilled.  Airship 27 Productions is thrilled to welcome gifted writer Curt Ferlund to our ranks and premier this truly wonderful new pulp hero.

MONGREL (Chapter Two) – And lastly the saga of the modern day action hero, Mongrel, continues in this second chapter picking up where the first ended.  There is a conspiracy to destroy Mongrel’s family, the owners of a multi-faceted high tech communications empire.  Using disguised, sophisticated cyborg assassins, the enemy strikes from the shadows.  This is Airship 27 Productions’ first on-going chapter serial and is presented by the creator of Dillon, the one and only Derrick Ferguson.

Airship 27 Productions’ 14th title of the year features a stunning cover by artist Marco Turini with interior illustrations and designs by Art Director Rob Davis.  Here once more are four fast-paced, colorful heroes created in the spirit of the golden age pulp avengers and brought to you by the publisher where adventure reigns.  Airship 27 Productions.  PULP FICTION FOR A NEW GENERATION!

And in two weeks as a POD from – (http://indyplanet.com/store/)

Posted by Ron Fortier at 7:00 AM No comments: