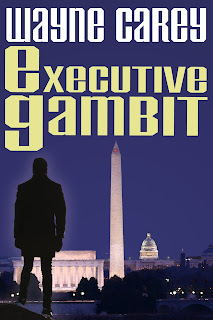 Airship 27 Production, one of the leading publishers of New Pulp Fiction, is proud to announce the release of a thrilling new spy novel by writer Wayne Carey.

America’s greatest fear is realized when President Trent’s personal helicopter, Marine One blows up with him aboard. At the same time, across the Atlantic, Air Force Two carrying the Vice-President Duncan McNeil explodes while landing at Rome’s international airport. Within hours a Palestinian radical fringe group called Vengeance claims credit for the assassinations. A shaken Speaker of the House, Oliver Holstein, is immediately sworn in as the new President.

Every intelligence agency of the free world is tasked with finding Husam al Din, the mysterious mastermind behind Vengeance. Then Italian officials report that the Vice-President’s personal Secret Service agent miraculously survived the crash and is recuperating in a Roman hospital. What does he know? Can he provide intelligence that might uncover the inside agents responsible for the twin terror attacks? More importantly, is he still a target of Vengeance?

The stakes have never been higher as a cunning, ruthless foe prepares to unleash a nuclear holocaust on America’s allies in the final Executive Gambit.

“When first starting Airship 27,” Managing Editor Ron Fortier recounts, “Art Director Rob Davis and I agreed we would welcome any and all genres as long as the writing was of a professional caliber. To that end we’ve published everything from classic golden age masked avengers to horror, fantasy and even children’s books. With Wayne Carey’s Executive Gambit we’ve now entered into Tom Clancy country. This book is as gripping and exciting as anything on the mainstream market today and would sure make one hell of a movie.”

To package the new espionage thriller, Fortier assigned Davis to do both the interior illustrations and design the cover. “Happily, upon reading Carey’s manuscript, Rob was equally excited about this book and delivered a truly gorgeous all around package that effectively targets the thriller fan base. Once in readers’ hands, I predict word of mouth will soon make the name Wayne Carey one to look out for.”

Available at Amazon in paperback and soon on Kindle. 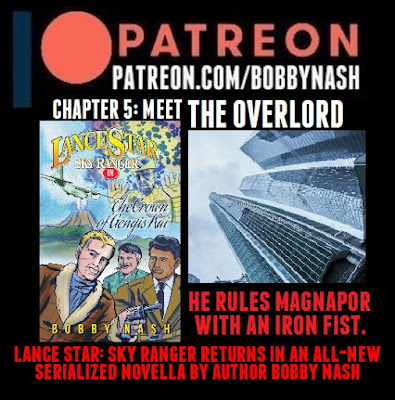 The adventure continues at www.patreon.com/bobbynash

Welcome to week 5 of Lance Star and the Crown of Gengis Kai, an all-new serialized novella by award-winning author Bobby Nash.

The story so far... Lance Star and Buck Tellonger head to the mysterious island nation of Magnapor, an island filled with danger and mystery to meet Professor Simon Prentiss. Simon needs Lance's help to find the fabled Crown of Gengis Kai. Unfortunately, they aren't the only ones on the trail of this missing treasure. Meet The Overlord of Magnapor in this chapter of an all-new Lance Star: Sky Ranger novella. Cover art by James Burns.

Posted by BobbyNash at 10:09 PM No comments: