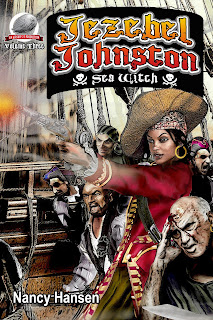 Airship 27 Productions is thrilled to present the third installment in Nancy Hansen’s epic saga of the rise of Pirate Queen Jezebel Johnston.

Having escaped the clutches of the sadistic French pirate, Julien Levesque, young Jezebel Johnston and her companions, Walter Armitage and Pakke, throw their lot in with the inexperienced captain Emile Gagnon and his crew. Fleeing in his speedy sloop rechristened Sea Witch, their audacious plan is to recruit additional sailors and raid the pearl rich islands beyond Port Royale.  But to do so they will need to avoid the larger pirate ships relying on stealth and cunning.  If they succeed, a treasure beyond imagining awaits them. If they fail, a cold and watery grave.

“With  book # 3, Sea Witch, Jezebel’s life takes a drastic detour,” says Airship 27 Productions’ Managing Editor, Ron Fortier.  “New allies are formed and plans formulated to evade old enemies. Hansen’s research is as meticulous as ever as she continues the saga of this truly memorable character. Anyone who has read the first two books will be thrilled to dig into this new chapter.”