The Charlotte Comicon on August 1, 2010 in Charlotte, NC. http://www.charlottecomicon.com

The Charlotte Comicon on December 19, 2010 in Charlotte, NC.
http://www.charlottecomicon.com

More to come. Hope to see you at the cons.

Bobby
Posted by BobbyNash at 4:20 PM No comments:

Wow. Apparently, my upcoming graphic novel, Yin Yang is available on Wowio at http://www.wowio.com/users/product.asp?BookId=6065
Check it out.
The print edition of the Yin Yang graphic novel will be in stores and comic shops in September, 2010.
More as I get it from Arcana.
Bobby
Posted by BobbyNash at 4:18 PM No comments: 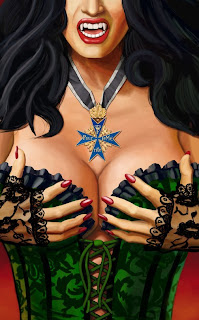 We just learned this morning that our graphic novel, DAUGHTER OF DRACULA, has won the Wild Wolf Entertainment Award for best selling WWE title of 2009. WEE's President, Sean Collins, posted the news on a You-Tube clip you can view by hitting title over the column. Rob Davis and I are thrilled by this award and want to thank Sean and Wild Wolf Entertainment for their continued support and faith in the book. They truly helped bring it to a larger audience. And of course thanks to all of you who bought a copy and spread the word. We owe you much. Finally, the book is still available at Amazon and other fine booksellers. Thanks again, Ron Fortier.
Posted by Ron Fortier at 6:47 AM 1 comment: 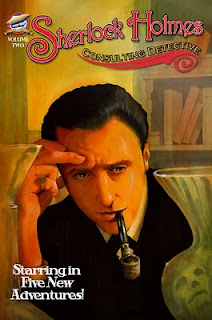 THE GREAT DETECTIVE IS BOX-OFFICE GOLD!

Arriving in the midst of the media phenomenon that is the new record breaking movie, “Sherlock Holmes”, starring Robert Downey Jr. and Jude Law, this new collection is the perfect treasure for movie-goers eager to get their hands on more Holmes and Watson adventures. As this iconic character’s exploits again take hold of the public’s imagination, new and old fans alike will be pleased to find this volume of all new stories.

A twisted scientist plots to alter the course of human evolution while another dreams of creating the world’s first mechanical thinking machine. A body is found in a secured bank vault and modern day pirates have begun harassing Her Majesty’s Royal Navy. Here are five new mysteries that will test the Great Detective’s uncanny talents of observation and the courage of his loyal companion.

Writers Bernadette Johnson, Joshua Reynolds, I.A. Watson and Andrew Salmon have delivered another compilation of fast paced, old fashioned tales guaranteed to warm the blood of the most ardent Holmes enthusiast. Sit back, dim the lights, and prepare yourself for the chase. Once more, the game is afoot!

Who Are Your Mentors?

Who Are Your Mentors? Read about a few of mine in the latest installment of http://comicsmentor.com.

I hope you'll check it out.

Bobby
Posted by BobbyNash at 12:57 AM No comments: