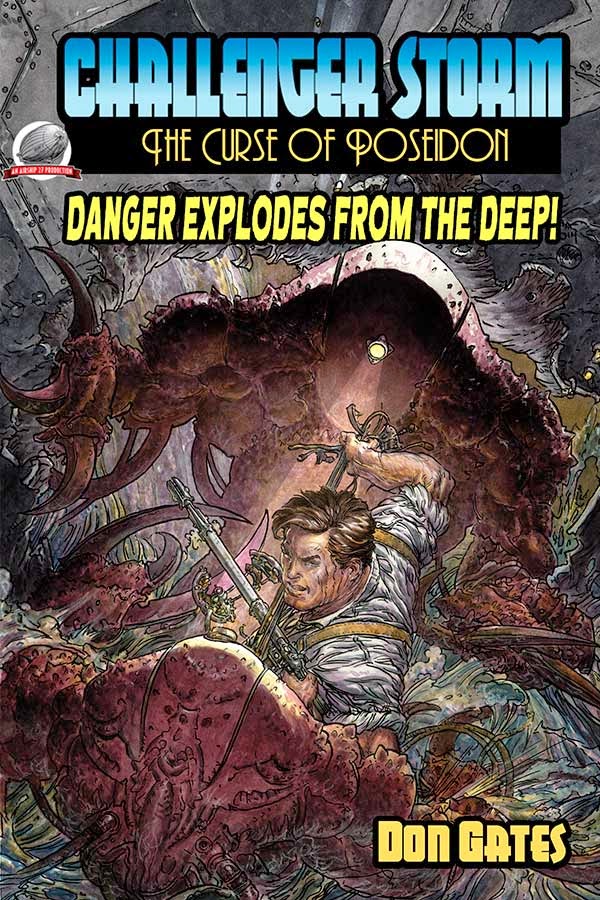 CHALLENGER STORM
In
CURSE OF POSEIDON

Airship 27 Productions is thrilled to announce the release of the second Challenger Storm adventure as written by creator Don Gates and illustrated by award winning artist Michael Kaluta.

“Challenger Storm’s debut novel, “The Isle of Blood,” was a delight to all pulp fans everywhere,” says Airship 27 Managing Editor Ron Fortier.  “In Storm, Don Gates has given us a classic pulp hero in the grand tradition of Doc Savage, Jim Anthony and Captain Hazzard.  Add illustrations and covers by one of the finest artists in the world today and you have a recipe for excellence.  With “Curse of Poisidon,” Gates and Kaluta have amped up the action and thrills that is sure to thrill our readers.”

When several cargo ships begin disappearing on the waters of the Aegean Sea rumors begin to spread about black-armored demons rising up out of the deep.  For Challenger Storm and his MARDL team, these events hold no particular interest until one of Storm’s troubleshooters, Diana St.Clair, informs him that her former lover, and one-time MARDL scientist, Herbert Chambers is among the missing.

Later a freakish wave wipes out a small Greek fishing village leaving only a handful of survivors.  Is it possible someone has learned how to control the seas to do their bidding? When Storm and his companions arrive at a mid-ocean refueling station, they are attacked by saboteurs wielding bizarre rifles that fire sea-water.

Who is the mysterious figure calling himself Poseidon and what is the secret of his ability to create monstrous tidal waves?  Can Challenger Storm find his underwater base in time to stop this mad genius before he rains down more watery destruction upon unsuspecting coastal populations?  Is mankind is doomed to be ruled by a new King of the Seas!

Here is high-octane pulp adventure on…and below the waves!

“Curse of Poseidon” was edited by Fortier with book design by Airship 27 Art Director Rob Davis and is now available in both hard copy and on Kindle.

Posted by Ron Fortier at 6:01 PM No comments: 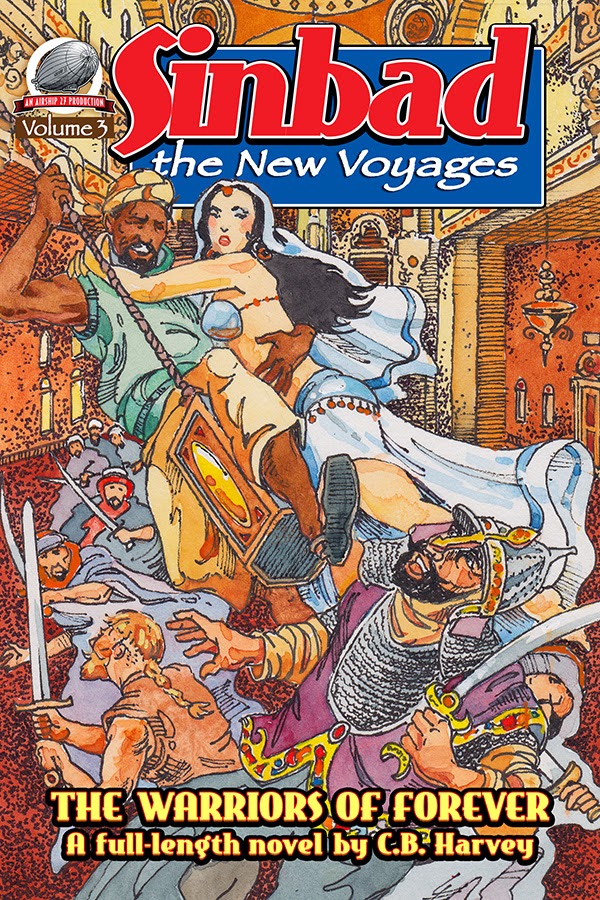 SINBAD & THE WARRIORS OF FOREVER

Airship 27 Productions is happy to announce the third volume in their SINBAD – The New Voyages series.  But this one, unlike the first two anthologies, is a full length novel adventure by C.B. Harvey.

“I’ve always been a huge fan of the Ray Harryhausen Sinbad movies,” explains Airship 27 Productions Managing Editor, Ron Fortier.  “The combination of exotic locales, a classic hero and Harryhausen’s fantastic stop-motion creatures delighted my imagination to no end.  This was the kind of story telling I wanted to bring to our pulp readers.”

Two years ago, Fortier set about creating a black Sinbad of Nubian origin who commanded an international crew that included Henri Delacrois, an archer from Gaul, Ralf Gunarson, a powerful young Viking from the northlands and Tishimi Osara, a female samurai from feudal Japan.  Assembling some of the finest writers in New Pulp today, Airship 27 Productions released two volumes, each containing three stories featuring this cast of characters.  Now comes C.B. Harvey’s novel, “Sinbad and the Warriors of Forever.”

When the undead Warriors of Forever, led by the one-eyed witch, Al-Izikel the Scarlet, attack the peaceful fishing village of the Xubanthali and kidnap their children, it falls upon Sinbad and the crew of the Blue Nymph to come to their aid.  Accompanied by the town elder, Al-Bulcar, and Illia, the beautiful daughter of the village shaman, the Blue Nymph is set on a course of dangerous mystery.  To locate the fabled demon horde they must first find the illusive Scholars of Bethsea for they alone hold the key to solving the riddle of the evil sorceress and the reason behind her abduction of villager’s young.

“Ray Harryhausen would have loved this!” Says Charles Saunders, author of the popular Imaro series. 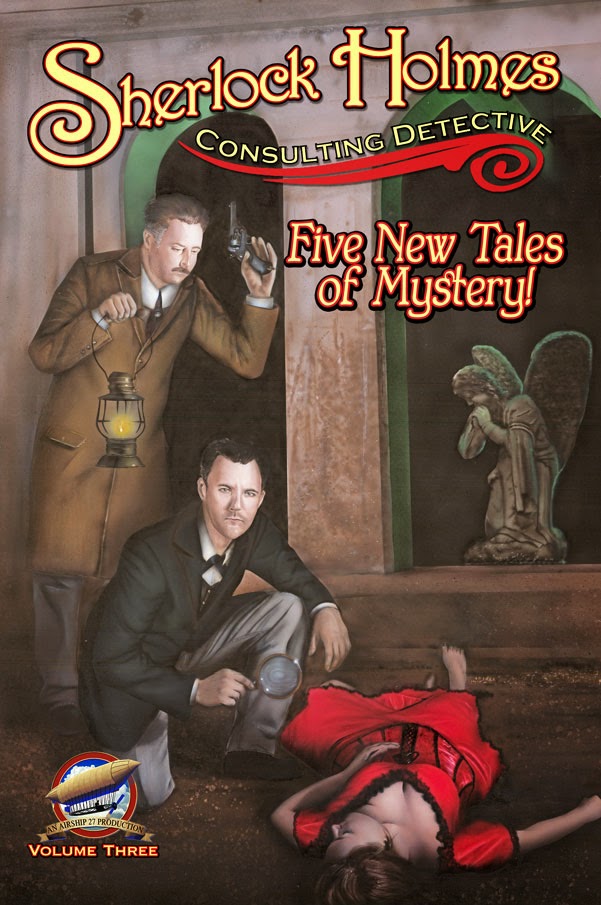 Happy to announce that Volume 3 of our best selling series  SHERLOCK HOLMES - Consulting Detective is now available on Kindle...like the other five. This was the last one to offer there digitally.

Captain Ron
Posted by Ron Fortier at 5:46 PM No comments: 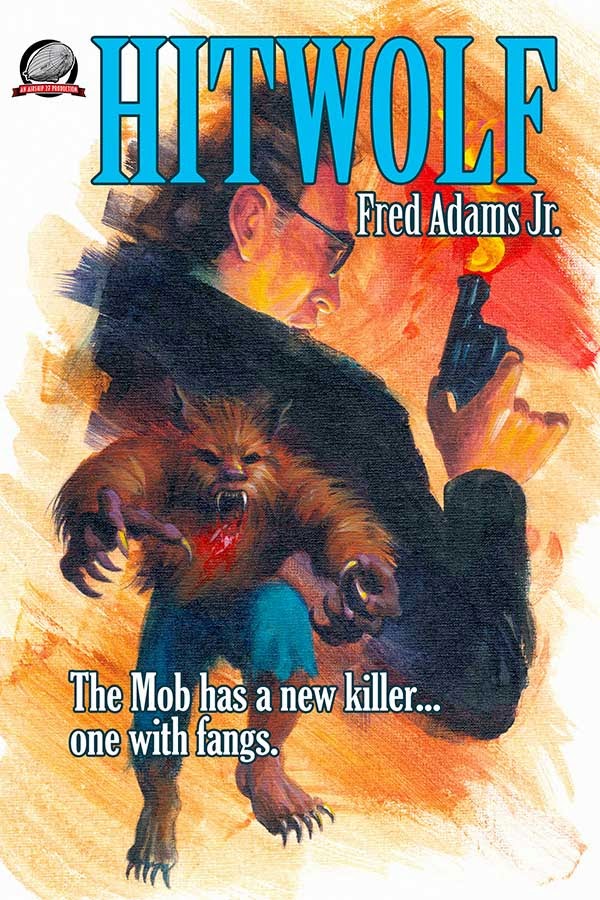 HOWL OF THE WOLF

Airship 27 Productions unleashes the beast within with its latest title, HITWOLF by Fred Adams Jr.

“One of the hallmarks of pulp fiction was its twisted genre mash-ups,” Ron Fortier, Airship 27 Productions’ Managing Editor, reminds readers.  “When you consider they would combine romance bodice-rippers with cowboy stories or mystery tales with aviation action then you understand there were no combinations pulp editors wouldn’t entertain.” Which was the appeal of HITWOLF, Fortier continues.  “When Fred Adams sent me his idea of merging a gangster story with a monster twist, it totally screamed classic pulp in my mind.  There was no way we were going to pass on this one.”

It is 1969; Newark, N.J.  Former Green Beret, Jim Slate, comes home from Vietnam to live a quiet, peaceful life.  His wish is cruelly denied him when he is kidnapped by a Michael Monzo, a local gang boss who wants to rule the entire city. To do this he must destroy his rivals.

Thus Monzo recruits an occult practioner who can turn an ordinary man into a vicious werewolf and then control his actions by the use of a magic amulet.  But to carry out this heinous plan, they need a subject.  And so Jim Slate is snatched and turned into a “Hitwolf.”

But Slate is no one’s puppet and despite the curse put on him, he will not be controlled.  After he manages to escape his master, he disappears into the thousands of acres of New Jersey woodlands known as the Pine Barrens.  But Monzo has no intentions of losing his pet killing machine.  Now the manhunt begins to capture Jim Slate…dead or alive!

“HITWOLF is Fred Adam’s first published novel,” adds Fortier, “and we here at Airship 27 Productions are thrilled to be its publisher.”  The book features nine interior illustrations by Pulp Factory Award Nominated artist, Clayton Hinkle, with a painted cover by Ingrid Hardy.  Adams currently has two other Airship 27 projects in development.

Posted by Ron Fortier at 8:17 PM No comments: