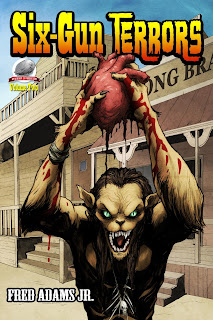 Airship 27 Productions is thrilled to be releasing the second volume in this series of weird westerns by writer Fred Adams, Jr.

Deep in the heart of the Caplock Mountains of Nevada a frightening new horror is preying on settlers and prospectors alike.  When the entire crew of a mining outfit is found torn to pieces, the U.S. Cavalry is sent to investigate under the command of General Sherman; the famous Civil War tactician.  He immediately recruits his former army scouts turned cowpunchers, Durken and McFee, to help ferret out this new threat to frontier settlements.

Soon the two cantankerous saddle-mates find themselves caught up between government agents and frightened Indian tribes who warn of an ancient evil returned to plague the white invaders; warriors capable of transforming themselves into beast!

“At a recent comic convention, this title was our best seller,” reports Airship 27 Productions’ Managing Editor Ron Fortier.  “People were immediately taken with artist Zachary Brunner’s gorgeous cover and we’re thrilled to announce he’s back handling all the art in this terrific sequel; both cover and interior illustrations.”  Readers of the first book in the series may notice a peculiar familiarity in the artist’s background on the cover. They are in fact a continuation of those seen in the first cover.  “This was a deliberate decision,” says Fortier.  “And we can’t wait until readers put both books together side by side.”  Award winning Art Director, Rob Davis adjusted the old logo to make this visual sequencing possible.

Once again Fred Adams Jr. delivers a gripping weird western that combines the best elements of both genres to deliver a non-stop action-adventure that will have pulp fans whipping through the pages.  Six-Terrors Vol II is a book you won’t want to put down. 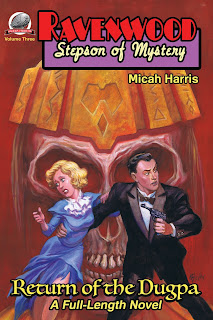 Airship 27 Productions, one of the leading publishers of New Pulp fiction, is thrilled to present the first ever full length novel based on the classic pulp occult detective series, Ravenwood – Stepson of Mystery by writer Micah Harris.

One of the most famous unsolved murder mysteries was the shooting death of well known actor-director, William Desmond Taylor in Hollywood circa 1922.  Nine years later, while investigating an alleged curse on German composer Wilhem Richard Wagner’s lost opera, occult detective Ravenwood uncovers a connection between the missing score and the death of the flamboyant Taylor.  He is hired to find it.

Upon arriving in Hollywood he discovers others connected to the lost opera have also perished under mysterious circumstances.  It is an arcane trail of death that leads back in time to the ancient plateaus of Lost Hyperborea and an immortal entity seeking the ultimate power to rule mankind.  As the first sound movie version of Wagner’s opera goes into production, the Stepson of Mystery races to solve Taylor’s murder before more blood is shed and the City of Dreams becomes a Nightmare Wasteland.

Says Airship 27 Productions’ Managing Editor, Ron Fortier, “This is a project we were excited about since day one when Micah Harris first suggested the plot to us.  His tying a classic pulp hero with one of the most notorious crimes in Hollywood history was sheer genius.  Then he sweetened the pot by bringing aboard renowned graphic artist Bret Blevins to do all the art, both interiors and cover, for what is a truly fantastic book.”

From the Golden Age of Hollywood to the magnificent seven ascending plateaus of Lost Hyperborea,  writer Micah Harris delivers the first ever Ravenwood – Stepson of Mystery full length novel in RETURN OF THE DUGPA.

Available at Amazon.com and soon on Kindle.

Posted by Ron Fortier at 7:27 AM No comments:

PULP - The Art of Rob Moran 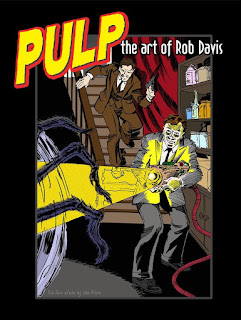 PULP!
The Art of Rob Davis

Airship 27 Productions is thrilled to announce the release of its newest title which shines the spotlight on one of the finest graphic artists in the media, Rob Davis.  Ten years ago, when the company was first launched, Davis accepted the position of Art Director and in that time has overseen the look and design of all the Airship 27 Productions novels and anthologies now numbering over a hundred.

With a background as a successful, highly respected comicbook artist, Davis quickly established himself as a gifted book illustrator when he took on that role for the company’s first titles three titles, “The Hounds of Hell,” “Brother Bones – The Undead Avenger” and “Secret Agent X – Vol One.”

“It was always agreed our books would feature interior illustrations,” explains Airship 27 Productions’ Managing Editor, Ron Fortier.  “Having Rob Davis onboard to provide the illustrations for those early titles was such a thrill for us and a major part of our success in the burgeoning New Pulp field.”

In the ten years Davis has been associated with the company, he has done hundreds of illustrations featuring both classic and new pulp heroes to include Secret Agent X, Captain Hazzard, the Moon Man, the Black Bat and dozens of others.  In his drawings for the Airship 27 Sherlock Holmes anthology series, he’s made a reputation as one of the premier Holmes & Watson artist working today.  That was solidified when he won the first ever Pulp Factory Award in 2009 in the Best Interior Illustrations category for his work in “Sherlock Holmes Consulting Detective Vol One.”

“PULP – The Art of Rob Davis,” is the first published collection of Davis’ remarkable work and contains 175 black and white pieces; all of which have appeared in the pages of various Airship 27 Productions books.   Adds Fortier, “We’ve no doubt this book will soon become a collector’s item to any true pulp fan who appreciates the role of art in the history of pulp fiction.”  The book features an Introduction by award-winning British writer I.A. Watson and Fortier provides a post-essay to round the volume.

Now available at Amazon in hardcopy and soon on Kindle. 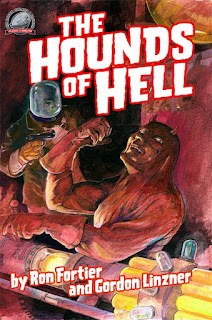 Airship 27 Productions is proud to announce the re-release of its first title, “The Hounds of Hell,” by Ron Fortier & Gordon Linzner.   First published in 2005, this new pulp adventure was one of the first pulp books to crossover characters from two classic pulp series of the 30s; the Moon Man, from 10 Detective Aces and Doctor Satan from Weird Tales.

“This was the first ever new pulp fiction artist Rob Davis and I put together all those many years ago,” says Fortier, Airship 27 Productions’ Managing Editor.  “From it would rise our new pulp fiction enterprise and help pioneer what has now become known as the New Pulp Movement.”

This brand new edition maintains the gorgeous wrap around cover by artist Tom Floyd and all the interior pieces by Art Director Davis.  Added to this is a special new introduction by popular new pulp writer, Barry Reese (Peregrine & Lazarus Gray) and a lengthy post-essay by Fortier detailing the history of the book and the birth of Airship 27 Productions.   Lastly, this new anniversary edition features a reprint of Fortier’s first ever pulp fiction tale, “Fury in Vermont.”

“Over a hundred titles later, we’re still growing every year,” Fortier says proudly.  “And we owe it all to this one book.  We hope our fans will enjoy seeing it back in print.”