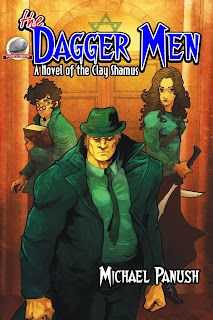 Sickle City is a magnet for the bizarre and unholy.  When a legion of dead Roman soldiers converges on the modern metropolis, its salvation will lie in the hands of three unique warriors employed by Herman Holtz, a corrupt, bootlegging Jewish rabbi.

Emmet Clay is a golem built by Holtz’ older brother, a powerful Russian rabbi.  As Holtz’ chief enforcer, he disguises himself as a detective.  His two loyal allies are the beautiful and fiery Zipporah Sarfati, a deadly Sephardic swordswoman and the young Harvey Holtz, the rabbi’s son; a devoted student of Jewish mysticism.  Together the three of them must uncover the secret of the Dagger Men, a secret society of Jewish warriors that traces its origins back to the bloody destruction of Judea.

“Michael Panush is one of the most exciting voices in New Pulp today,” reports Airship 27 Productions’ Managing Editor Ron Fortier.  “For the past few years he has thrilled pulp readers with several amazing series unlike anything else on the market.  I first became aware of his work with his post World War II detectives, Stein & Candle. Then a little while later he debut El Mosaico, a quintessential weird western that transplants a Frankenstein style monster into the old Wild West.  Michael brilliantly infuses Jewish mysticism and history in his tales which make them truly unique and memorable.”

Now this same writer offers up a terrific, fast paced supernatural thriller filled with some of the most original, fanciful characters ever imagined.  Cover and interior illustrations are provided by Pulp Factory Award Nominee Zacharry Brunner and Airship 27 Art Director Rob Davis handles book design.  “The Dagger Men” is roller-coaster pulp ride that doesn’t slow down until the very last page! 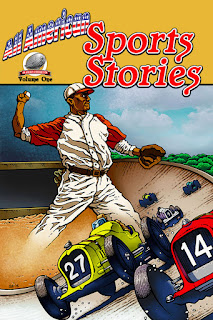 Airship 27 Productions is excited to offer its first ever fiction anthology focused on the amazing world of sports.  From the cry of “Play Ball,” to the firing gunshot of an Olympic contest, sports have played a huge part in the history of our great country.  A tradition wonderfully captured in the myriad sports titles from the golden age of pulps.

In the grand tradition of those early sports magazines, Airship 27 Productions offers up a quartet of exceptional stories by today’s best fiction writers all set in the 1930s.  Four pulse pounding stories of men who dared to challenge the status quo and through their skills and courage achieved victory both on and off the playing fields of America.

Terrence McCauley delivers up the tale of a former moonshiner looking to make his fortune on dirt tracks of stockcar racing while J. Walt Layne details one of the first interracial college football games ever played.  Up next John Rose goes into the fighting ring with a boxing prodigy form the hills of Kansas and then Fred Adams Jr. offers up a barnstorming adventure with the Negro Baseball League Moline Wizards.

Artist art cooper delivers thirteen dynamic illustrations that perfectly capture the essence of each dramatic moment; while Shane Evans graces the cover with a colorful college highlighting both baseball and stockcar racing.  With Art Director Rob Davis taking on the overall book designing chores to create a truly beautiful book reminiscent of an earlier sports publications.

ALL AMERICAN SPORTS STORIES is for all sports fans, young and old alike. 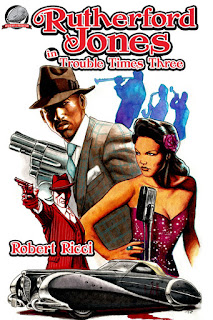 The year is 1937 and the Ford Jones Detective Agency operates from a small second story office in Oakland, CA.  Jones is a mousy, little man whose clothes are always a size too big.  His assistant is a tall, muscular black man named Rufus. All of which is a sham used to trick white clients.  Rufus is in fact the real Rutherford Jones, aka Ford Jones. Aware that his skin color would impede his chosen career, he convinces his young, alcoholic friend, Jimmy Bottles McGee, to pose as Ford Jones. The ruse leads to all manners of complications for the pair.

“The concept of this character and his having to conceal is identity appealed to me immediately,” recounts Airship 27 Productions’ Managing Editor Ron Fortier.  “Both racism and sexism were so prevalent during this time in our history; one has to believe this kind of subterfuge happened quite often.  We know that many black writers and women often kept their true identities secret to find acceptance among editors and publishers.  So why not a private investigator like Rutherford Jones?”

In this trio of stories Jones and McGee solve strange occurrences at a northern mine, deal with a power struggle within the Chinese community and assist a singing cowboy solidify his role as a new cinema star while running into a classic female pulp avenger along the way.  The stark, beautiful interior illustrations are by newcomer, Andrew Ritchie; this being his first assignment for Airship 27 and stunning cover is by the ever popular Patricio Carbajal; a real fan favorite.  Art Director Rob Davis, as ever, provides the overall design to wonderfully showcase this new action mystery series.

To be sure, Robert Ricci has created a truly original pulp hero who, like his predecessors, uses both his fists and know-how to serve the cause of justice.  Don’t miss this, his slam-bang New Pulp debut!

Posted by Ron Fortier at 9:46 AM No comments: