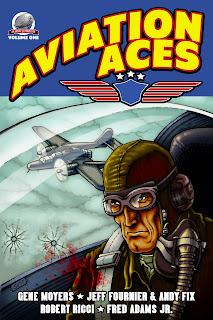 Since the advent of air combat over Europe during World War One, aviation would become an integral part of shaping the military future of all nations. Thus were born skilled men and women whose love of flying and unerring survival skills would label them as Aviation Aces.

From the 1920s forward, American pulp publishers gave their readers countless new monthly magazines featuring these amazing fliers from Bucky Barnes to Dusty Ayers and so many more. The stories were filled with high flying heroes willing to challenge the dangers of soaring above the world.

Now Airship 27 Productions is thrilled to take to the wild blue with four brand new, pulse-pounding, cloud-climbing adventures.  From a hidden Japanese base in the South China Sea, to the search for a missing scientist and a top-secret mission in a “rubber” plane, these stories soar boldly into the killer skies. Join writers Gene Moyers, Jeff Fournier, Andy Fix, Robert Ricci and Fred Adams Jr. as they fly straight into thrilling pulp action.

New Zealander Shane Evans provides the cover while Howard Simpson the twelve black and white illustrations, all under the guidance of Award Winning Art Director Rob Davis. “Aviation pulps were a staple of the 30s and 40s,” adds Airship 27 Productions Managing Editor Ron Fortier. “We’re excited to be offering up a new title to add to those old time classics. We think our readers are really going to enjoy Aviation Aces in a big way.”

Posted by Ron Fortier at 1:02 PM No comments: 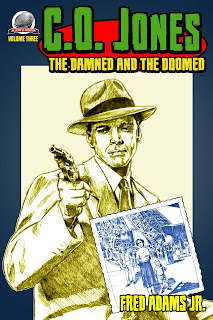 In this adventure Jones has come to Los Angeles to work as a Private Investigator. The business is good honest work and he is gradually adapting to the West Coast lifestyle. When he takes a job to investigate the death of orphan boy in an isolated desert monastery, he isn’t ready for the dark memories the case rekindle in him.

From his earliest days as a runaway working in a traveling carnival to a particular espionage assignment during the war, Jones is about to confront an old familiar Nazis horror in the arid, California wasteland. Only now it has been reborn in the most obscene way, with lost children as its victims.

“With each new installment in the series, the stakes get higher and higher,” says Airship 27 Productions Managing Editor, Ron Fortier. “C.O. Jones only wants to put the past behind him. Far, far behind. But the fates have different plans for his life and trouble just seems to find him like a homeless dog. The fun of this series is how it weaves back and forth between Jones’ top-secret war experiences to his new civilian battles. In this series, all the stops have been pulled out and it’s full speed ahead.”

Once again, Fred Adams Jr. spins a tale of suspense, menace and courage in the face of true evil. “C.O. JONES – The Damend and The Doomed” is a punch-in-the-gut pulp thriller you won’t want to put down.  Airship 27 award winning Art Director Rob Davis provides both the cover and interior illustrations.

Posted by Ron Fortier at 7:39 AM No comments: