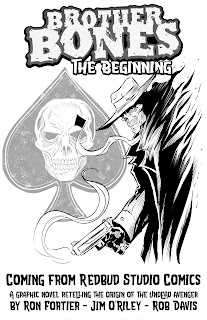 One of the most popular fictional figures in New Pulp, the character debut years ago from Airship 27 Productions in a collection of seven stories by Fortier, “Brother Bones – The Undead Avenger.” It was then followed up with a full length novel by Roman Leary, “Brother Bones – Six Days of the Dragon.” Fortier then completed two additional collections. “Brother Bones – Tapestry of Blood” and “Brother Bones – City of Lost Souls.” In that time several short Brother Bones strips were offered.  “Needle Justice,” was a short 8 pg tale with art by Joe Arnold and has appeared in various black and white comic anthologies.  “Bullets of Jude” was a 24 pg single from Redbud with art by John Polacek.

Whereas the actual origin of the character was only related in the first book collection. Something Fortier had hoped to change and so he wrote a 130 pg graphic novel that does just that. The challenge was finding the right artist to bring that story to visual life. “In the end, I decided to put the word out on Facebook,” Fortier reports. “My hope was if I cast a wide enough net, someone out there would either respond or connect me with an artist.” A few days later, Florida based artist Cesar Feliciano, suggested to Fortier that he contact New York artist Jim O’Riley. After exchanging a few e-mails, O’Riley agreed to take on the project.

O’Riley will pencil and ink the Fortier’s script while Redbud Studio head, Rob Davis will letter and edit. Once done, the studio will print the book via Amazon.

Jim O’Riley is a freelance indie comic and sketch card artist.  He has done sketch cards for Topps and Upper Deck working on such properties as Star Wars Master Works, The Last Jedi, Solo, The Walking Dead, Stranger Things, Marvel premiere, Thor Ragnarock, DeadPool, Xmen Ultra Fleer just to name a few.  He has also illustrated indie comics for Pilot Studios, Crazy Monkey Ink, Limitless Comics, and Industry veteran inker Mark Mckennas virtual inks inc., on various projects such as covers and interior work. “I fell from the womb with pencil in hand and have been drawing on and off ever since,” he says.  In the 90s O’Riley laid down the pencil to start a family and in 2016 started back with art. He has participated in comic cons from NYCC to All Star and C2E2.  Hands down Baltimore is his favorite and he is am looking forward to returning this year.

In regards to this project, “I am honored to be given the opportunity to work on Brother Bones along side Ron and Rob.  I have been looking for a script to sink my teeth into and I have to say the universe thankfully fated this one to me.  A special thanks to Cesar for introducing Ron and I.  It will be a challenge for sure and in the end I hope readers enjoy it and I do the story honors.”

Fortier’s own reactions were no less enthusiastic. “After seeing Jim’s early sketched of the characters from the story, I was simply bowled over. Not only is he a gifted artist, his style is perfectly suited for this kind of dark, creepy tale of mobsters and ghouls. Working with him is going to be a real treat.”

Fortier is a comics and pulps writer/editor best known for his work on the Green Hornet comic series and Terminator – Burning Earth with Alex Ross.  He won the Pulp Factory Award for Best Pulp Short Story of 2011 for “Vengeance Is Mine,” which appeared in Moonstone’s The Avenger – Justice Inc. and in 2012 for “The Ghoul,” from the anthology Monster Aces. He was awarded Pulp Grand Master in 2017 by the Pulp Factory. He is the Managing Editor of Airship 27 Productions, a New Pulp Fiction publisher and writes the continuing adventures of both his own character, Brother Bones – the Undead Avenger and the classic pulp hero, Captain Hazzard – Champion of Justice.

Rob Davis began his professional art career doing illustrations for role-playing games in the late 1980’s.  He began lettering and inking, then penciling comics for a number of small black and white comics publishers- most notably for Eternity Comics, which eventually became Malibu Comics in the 1990’s, on their book Scimidar with writer R.A. Jones. He eventually worked at both DC and Marvel on likeness intensive comics like TV adaptations of “Quantum Leap” and Star Trek’s’s many incarnations mostly on the Deep Space Nine for Malibu. After industry implosion in the late 1990’s Rob picked up work on video games, advertising illustration and T-shirt design as well as some small press comics like Roby of Sherwood for Caliber. Rob continues to do the odd self-published comic book as well as publisher and designer for his small-press production Redbud Studio. Rob is Art Director, Designer and Illustrator for Airship 27 Productions. Rob is the recipient of the Pulp Factory Award “Best Interior Illustrations” in 2010 for his work on “Sherlock Holmes – Consulting Detective”and has been nominated for the same award every year since. He works and lives in central Missouri with his wife and two children.

Posted by Ron Fortier at 6:11 PM No comments:

“Sometimes half an inch is all that stands between life and death.”

Learn more about Snow at www.ben-books.com.

Bobby Nash's love for the 70's P.I. sings off these pages like a bullet careening off the windshield of a Detroit Muscle car. Razor sharp writing and deep pulp sensibility keeps this series at the top of the list!
-James R. Tuck- author of the Deacon Chalk series

Posted by BobbyNash at 1:00 PM No comments: