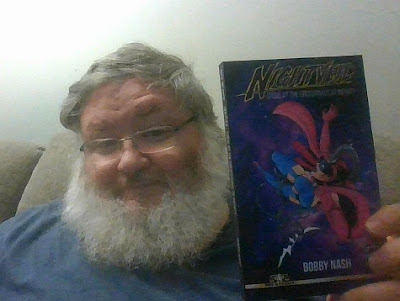 Bobby Nash reads opening chapter of his Pulp Factory Award winning Best Novel, Nightveil: Crisis at the Crossroads of Infinity. You can watch it HERE!


If you'd like to check it out, the novel is available in paperback and ebook. You can read it FREE with your Kindle Unlimited subscription. Published by Pro Se Productions. Officially licensed from AC Comics. You can find it HERE.

Congratulations again to all of the Pulp Factory Award winners!


Bobby
Posted by BobbyNash at 11:27 AM No comments: 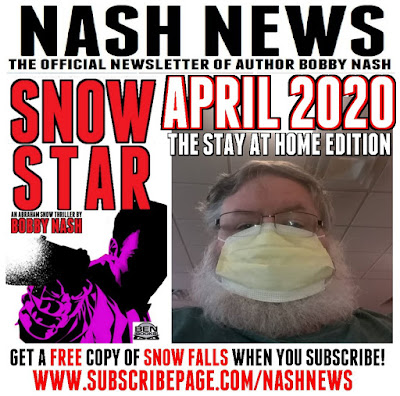 April's NASH NEWS email newsletter went out to subscribers early this morning. Getting on the list is easy and FREE and comes with a prize. Head on over to http://www.subscribepage.com/NashNews and sign up for Nash News and you'll get a FREE copy of SNOW FALLS in the ebook format of your choice.

What are you waiting for?

Posted by BobbyNash at 1:23 PM No comments: 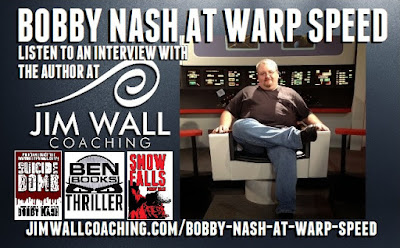 New Pulp author Bobby Nash was the featured artist guest on Jim Wall's Coaching podcast. We had a great conversation on the writing life, being prolific, Snow, sitting in the captain's chair on the bridge of the USS Enterprise, creating characters, themes, tropes, BEN Books, where all these crazy story ideas come from, and so much more.

Sit back, relax, and give it a listen HERE.

"Thanks again, Jim. That was fun."
Bobby
Posted by BobbyNash at 3:24 PM No comments: 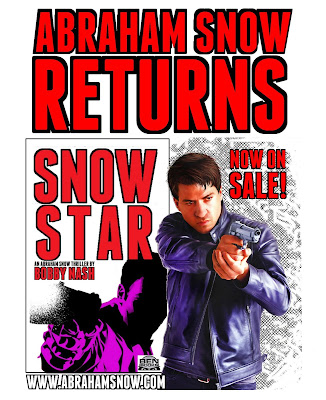 My latest release, Snow Star is now on sale.

After a year’s absence, author Bobby Nash’s Abraham Snow returns to bookshelves in a brand-new mystery/thriller called SNOW STAR published by BEN Books. You can read and/or watch the author read the opening chapter at www.abrahamsnow.com and below. You can also find the video on YouTube HERE and below.

About Snow Star:
To the world at large, Miranda Shake is a big star best known for her work on the long-running television series, The Adventures of Amazing Woman. But Abraham Snow knew her by another name, Melanie Shaw. Before the fame, they were childhood friends. After school, Snow enlisted, leaving his life, family, and friends behind. Melanie went off to Hollywood, changed her name, and became a star.

Now, reconnected after so many years, Snow has fallen for her once again. For the first time, in a long time, he’s happy.

When Miranda Shake is found dead on New Year’s morning, having apparently jumped from the roof of her condo while wearing her TV superhero costume, everyone is quick to call it suicide, another troubled star taking her own life.

Everyone except Abraham Snow.Snow is convinced that his friend was murdered and sets out to find out who did it and why, much to the irritation of Atlanta Homicide Detective, Robert Trent, who does not like private investigators butting into his cases.

SNOW STAR is the fifth book in the continuing adventures of Abraham Snow. 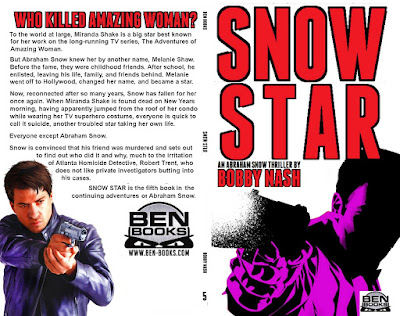 SNOW STAR is available for purchase at the following retailers:

“This story is one I’ve been wanting to tell for thirty years,” says Nash of the story. “I love a good mystery and in 1989, I wrote ‘Who Killed Amazing Woman?’ and knew I would have to tell that story one day. I just needed the right protagonist to solve it. The story was just waiting for Abraham Snow.”

Abraham Snow will return Summer 2020 with SNOW DOWN, the 6th book in the series and the end of series 1. SNOW Series 1, Vol. 2 will follow soon after. SNOW series 2 will debut Winter 2020.

Keep up with all of the latest SNOW news at www.abrahamsnow.com.
Stay up to date on BEN Books releases at www.ben-books.com.
Follow author Bobby Nash at www.bobbynash.com and across social media.

SNOW STAR EXCERPT:
How could things go so wrong so fast?

Three hours ago, Miranda Shake had kissed her best friend, the only guy she knew that never tried to take advantage of her. They had been friends for over twenty years. She loved him and felt confident that he had similar feelings for her. Of course, neither of them would ever be the first to admit it, which left them idling in neutral.

Except that one time.

It seemed so long ago now. Almost like a faded memory. Sometimes she wondered if it had been real or if it was just two people lost in a moment. Either way, it was a precious memory.

With him, she could be Melanie Shaw, the name her parents had given her and the one she used when her friend first met her back at Sommersville High School all those years ago when she had been ashamed of the freckles that dotted her face, the same freckles that today were often referred to as sexy. Sometimes she missed plain ol’ Melanie Shaw. It wasn’t always easy to be Miranda Shake, TV and movie star, in a world that was constantly tugging at her.

She had invited her friend to a New Year’s Eve bash atop a swanky downtown Atlanta hotel. He had resisted at first, but she was hard to say no to when she wanted. The party was a who’s who of the industry elite, actors and celebrities, movers and shakers, money makers and money grabbers. This was more her world that his, but she was over the moon when he agreed to be her date for the evening. He seemed only marginally uncomfortable as she worked the room, flashing that million-dollar smile that had melted so many hearts over the years.

At midnight, as fireworks exploded overhead, she kissed him.

It was long, hard, and as passionate a kiss as she had ever planted on anyone.

She didn’t want the night to end.

When the party started to die down an hour later, she threw caution to the wind and invited him to stay the night. Her condo was close by and she promised that together they would kick the New Year off in style, make it a night to remember. A night of passion with the beautiful Miranda Shake was an invitation few
men would be able to refuse.

When he declined, she was surprised, then angry, then eventually, understanding. He had a prior commitment the next morning and needed rest. Work, he said. As he explained the situation, she understood, but was disappointed. She had longed to spend the night together. Any other man, she might not have believed, assuming the worst, but she had never known him to lie to her before. There was no reason to think he would now.

“Some other time,” he said before he kissed her goodnight.

“That would be a good start,” she said, a little too flirty. She chided herself. There was no need for that with him. She knew that he liked her. The old seduction tricks weren’t necessary.

He had offered to drop her at her condo on the way, but she decided to spend a little more time at the party with the stragglers.

And she needed another drink.

She knew better, of course. Miranda Shake had a problem, one well documented in the tabloids and on tabloid TV over the years. She did not know how to say no to another drink. As a young starlet, rocketed to stardom early in her career thanks to a lucky break on a TV series that hit big followed by a role in a movie that garnered her an Academy Award nomination one year and another that saw her take home the fabled trophy the next, Miranda Shake became popular fast. For a time, she was America’s sweetheart.
Everyone loved her. She was a star.

They also loved to buy her drinks.

A lot of miles had come and gone since then and she had kicked the pill habit, but alcohol was the demon that would not leave her alone. Not for the first time, she cursed the demon that was substance abuse. She knew many who called it a disease, but Miranda didn’t buy it. She knew the monster was real. A disease could be cured. The monster, her demon, would never die. All she could do was lock it away, if only for a short time.

No matter how strong the cage, her monster always escaped.

She tried to fight it, she did, sometimes she was even able to walk away from it if her guard was up, but when the monster saw weakness, it struck.

Though he did not mean to be, her old friend, Abraham Snow was a weakness.

When he left her, the monster saw it’s opening--

When her guard was sufficiently lowered, the vultures circled as they usually did, preying on her moment of weakness. One drink led to a second, which became a third, then fourth, and then she wasn’t paying attention to where the drinks were coming from. As she knocked back the drinks, Miranda Shake was once again lost down the old, familiar rabbit-hole, curiouser and curiouser.

Things get blurry after that. 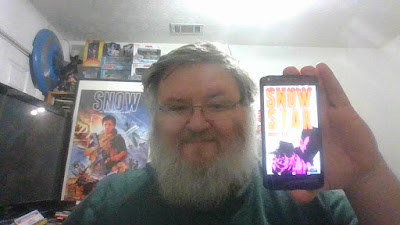 Posted by BobbyNash at 2:24 PM No comments: 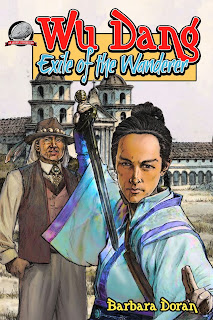 Chinese Martial Artist, Yi Xiao, having been transplanted to California is still seeking his Doa, that elusive wisp of spiritual peace that so elusive. It certainly doesn’t help when he finds himself dealing with all kinds of supernatural monsters controlled by an American sorcerer named Bly. Bly’s goal is to steal the all-powerful magic of the mighty Old Man Mountain spirit and Xiao has to stop him.

Luckily Yi Xiao has his own unique allies. There is Wu Chang, the walking-dead martial artists sent from China by Xiao’s grandmother to be his bodyguard. Then there is Deathshead, the Indian Coyote spirit with his own agenda and a community of Spanish born sisters that also possess strange arcane abilities. Throw in a water horse and a fire snake creature and once again writer Barbara Doran cooks up a fantasy stew unlike anything ever imagined.

“We also brought back the same art-team on this volume,” happily announces Ron Fortier, Airship 27 Productions Managing Editor. “Artist Gary Kato provides the interior illustrations and our own award winning Art Director Rob Davis turned in the amazing cover. Fans of the first Wu-Dan will not be disappointed. You can take that to the bank.”

“Wu-Dang : Exile of the Wanderer,” is a non-stop pulp adventure that will both entertain and delight readers from ten to eighty.