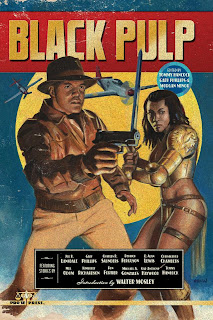 "BLACK PULP!"
Batesville, AR – 4/17/2013 – Pro Se Productions, a Publisher known for balancing tales harkening back to classic Pulp Fiction with stories pushing the boundaries of modern Genre Fiction, continues its publishing of books that do both. Pro Se proudly announces the debut of BLACK PULP, a collection featuring the work of various authors, including bestsellers Walter Mosley and Joe R. Lansdale.

Co-editor of BLACK PULP, crime novelist Gary Phillips observed, “While revisionism is not history, as the films Django Unchained and 42 attest, nonetheless historical matters find their way into popular fiction. This is certainly the case with New Pulp as it handles such issues as race with a modern take, even though stories can be set in a retro context.”

Black Pulp offers exciting tales of derring-do from larger-than-life heroes and heroines; aviators in sky battles, lords of the jungle, pirates battling slavers and the walking dead, gadget-wielding soldiers-of-fortune saving the world to mystics fighting for justice in other worlds.

“The title is indeed BLACK PULP,” Pro Se Productions publisher and Black Pulp co-editor Tommy Hancock, "but these stories appeal to all. All of the basic needs for a story to touch a reader are there, including emotion, action, relevance, and more. To see all of that in a Pulp story funneled through characters that got the short shrift in terms of appropriate treatment in classic Pulp is definitely something worth sharing."

BLACK PULP also features a new essay on the nature of Pulp, both classic and modern, by award winning bestselling author Walter Mosley.

BLACK PULP is available now from Amazon at http://tinyurl.com/d8wjtph
and via Pro Se's own store at https://www.createspace.com/4248056! Coming soon in digital format to Kindle, Nook, and more!
With a pulse pounding original cover by artist Adam Shaw and stunning cover design by Sean Ali, BLACK PULP delivers hair raising action and two fisted adventure out of both barrels!

For more information concerning BLACK PULP, including interviews and review copies, contact Pro Se Productions at 870-834-4022 or at proseproductions@earthlink.net.
Posted by Ron Fortier at 1:34 PM No comments: 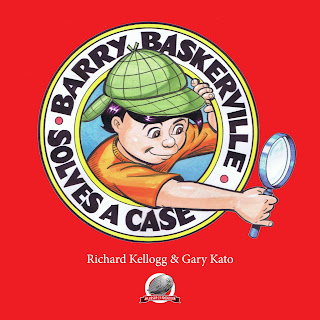 Airship 27 Productions is thrilled to present its first ever title aimed at the children’s book market.  “Barry Baskerville Solves a Case,” is by writer Richard Kellogg and is wonderfully illustrated by artist Gary Kato who provides 16 full color illustrations.

The story is about a young boy who wants to just like his hero, the famous detective, Sherlock Holmes.   Airship 27 Productions Managing Editor, Ron Fortier, was only too happy to discuss this project.  “Part of our publishing goal has always been to bring younger readers to the exciting world of pulp fiction,” he explains.  “But for the most part our material was geared to young adults and older.  There was an obvious gap missing with children between the ages of 7 and 10.”

The submission of “Barry Baskerville” by Kellogg was exactly what Fortier and his art Director, Rob Davis, had been looking for all along.

“Richard Kellogg is a gifted writer,” Davis applauds, “with a professional background in academics.  Once we had his story, we knew Gary Kato was the artist to bring it to visual life for us.  And he did an amazing job.”

RICHARD L. KELLOGG - lives in upstate New York and is a Professor Emeritus of Psychology at the SUNY College of Technology in Alfred, New York.  He has received grants from the SUNY Research Foundation to develop teaching materials on the Sherlockian methods of problem solving and has delivered conference presentations on Sherlock Holmes at Colby College, the Stevens Institute of Technology, and Alfred University.

Richard is the author of three books about Sherlock Holmes and is a frequent contributor to THE BAKER STREET JOURNAL and THE SERPENTINE MUSE.  His most recent book on the Great Detective is a collection of insightful essays titled VIGNETTES OF SHERLOCK HOLMES (Gryphon Books, 2008).

Dr. Kellogg delights in introducing young readers to the magical world of Sherlock Holmes and Dr. John Watson.  He hopes that the exploits of Barry Baskerville will encourage children to explore the original tales of detection penned by Sir Arthur Conan Doyle.  They will discover that Sherlock Holmes can be a marvelous companion for the rest of their lives.

GARY KATO – A professional graphic artist for the past thirty-five years, Gary is a native of Honolulu, Hawaii, where he has lived all his life.  He broke into the comics industry in the mid-70s his art and lettering have appeared in such notable titles as, MS.TREE, ELFQUEST, and Marvel’s DESTROYER DUCK to name a few.  Along with writer Ron Fortier, he created the highly popular comedy superhero, MR.JIGSAW, Man of a Thousand Parts, a series thirty years old today and published through Redbud Studios.

Beside his comics work, Gary is professional caricaturists on the islands.  He is also considered one of the finest landscape painters of Hawaii, his popular canvases capturing the natural beauty of this tropical paradise he calls home.

“Whereas our Sherlock Holmes titles have always been our biggest sellers,” finishes Fortier, “it only seemed appropriate that our first ever children’s title would be connected with the great consulting detective.” 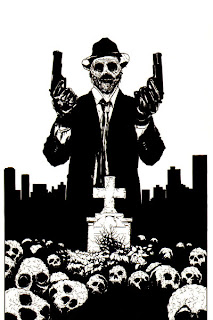 Richard Serrao, a graphic artist quickly making a name for himself in the crime noir field, has signed on to do the interior illustrations for Airship 27 Productions anthology, THE PURPLE SCAR, Vol One.

The Purple Scar was a little known golden age pulp hero with a different twist that was clearly horror inspired.  Plastic surgeon Miles Murdock was a famous man who had studied psychology and the roots of fear in human emotions.  After medical school he opened in a clinic in the slums of Akelton City.

When mobsters shot down his brother, a police officer, they then proceeded to destroy the man’s face by throwing acid on it.  When Murdock saw what had been done to his sibling he vowed to bring the murderers to justice and thus was born the grim nemesis of evil known as the Purple Scar.  Using his sculpturing skills, Murdock  made a perfect reproduction of his brother’s death face, scars and all, in the form of a pliable rubber mask, which he fitted over his own face. The acid-destroyed features had been so skillfully copied that the least sensitive eye would recoil at seeing it.  “It was the face of a corpse,” Murdock said, “I’ll use this mask only when I want it known the Purple Scar is on the trail.”

There were only a handful of Purple Scar tales ever written and Airship 27 Productions’ Managing Editor Ron Fortier first became aware of the character when Altus Press did a collection of all his adventures in one volume.  The idea was then hatched to recruit new pulp writers and put together a brand new collection.  “But more than of our other projects, this one required a special style of artwork,” Fortier elaborates.  “What I wanted our readers to discover was a special kind of pulp-horror vigilante unlike anything else ever created.  We really wanted to play up that horror element.”

When Fortier discovered Richard Serrao’s grim crime illustrations on Facebook, he knew he had the artist with the right sensibilities to do the Purple Scar justice.  For Serrao, the character is a fun challenge and he is eager to get work on illustrating the four new Purple Scar stories that will be featured in volume one.  He will provide three black and white spot illustrations for each of the tales as written by Jim Beard, Gary Lovisi, Jonathan Fisher and Gene Moyers.

Airship 27 Productions hopes to have THE PURPLE SCAR Vol One out later this year.

Posted by Ron Fortier at 9:39 AM No comments: 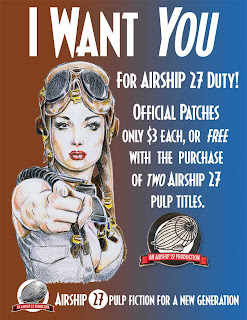 The Flight Crew of Airship 27 Productions is very happy to announce they will be offering a cloth patch premium featuring the company’s dirigible logo for sale starting at this year’s Windy City Pulp & Paper Con.   Anyone buying two of the company’s titles at regular prices will receive a “free” patch.  They will sell for $3 each for those wishing them purchase them separately.

“Premiums are fun things to help promote one’s brand,” stated Managing Editor Ron Fortier.  “Art Director Rob Davis and I have wanted to offer something like this to thank all our great fans for their support over the past years.  The patch seemed like a very cool way to allow them to join in the fun by becoming official members of the Airship 27 Crew.”

After the con, the patch will be sold via mail, with an additional mailing fee, and be available at Pulp Fest in July.  The patch is 3” high and 3.75” wide featuring the colors, red, white, black and gray.
Posted by Ron Fortier at 7:14 AM No comments: