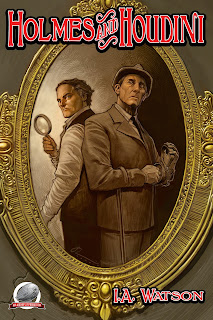 They call themselves the Far Edge Club, a mysterious cabal of rich, sadistic hedonist who live only to create pain and fear in others.  Only one man has ever bested their perverted schemes, the world renowned magician and escape artist, Harry Houdini.  Now London will become the stage for their final confrontation.

The Club has recruited an army of killers in their maddened goal to destroy Houdini. But they are unaware he is not without his own allies.  Joining the fray at the American’s side is none other than the Great Detective of Baker St, Sherlock Holmes and his loyal companion, Dr. Watson.  Together these exceptional heroes will battle an insidious evil and attempt to solve the mystery of the Ghost Mask of L’Inconnu.

“We’ve been waiting almost an entire year to get this out,” says Airship 27 Productions Managing Editor Ron Fortier.  “15 copies of a limited edition collectors edition sold out on the first day at this year’s PulpFest in Columbus, Ohio. It sported a variant cover by Art Director Rob Davis.  Now we have artist Chad Hardin’s wonderful cover and can at last get this book out to all our anxious fans.”  Davis, as he always does with all Holmes titles at Airship 27, provided the black and white interior illustrations and book design.

Writer I.A. Watson has delivered an incredible adventure mystery that will keep readers up till the wee hours of the night.  “Homes & Houdini” is New Pulp fiction at its finest.

Now available at Amazon in paperback and soon on Kindle.

Posted by Ron Fortier at 7:10 AM No comments: 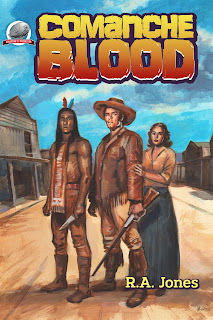 Airship 27 Productions is thrilled to announce the release of the second in writer R.A. Jones’ western series featuring Jason Mankiller. During the Civil War, the young Union soldier had a tattoo painted on his left check; that of blood drops falling from the corner of his eyes.  Since that time, earning his reputation as a bounty hunter, he is known on the Texas frontier as The Man Who Cries Blood.

In this second tale, Mankiller is on the trail of three vicious Comancheros who have been stirring up trouble between the Comanche and the white settlers of Fort Rogers.  Even though the skilled hunter has the friendship of the notorious half-breed Comanche Chief, Quanah Parker, it is still left to him to find the renegades and prevent more bloodshed.

“When R.A. first approached us about doing this series, we were delighted,” says Airship 27 Productions Managing Editor Ron Fortier. “He wanted to do a straight up, old fashion western adventure. No fantasy elements, no weird western label. Just a classic tale of the old west during the years after the Civil War when America was attempting to heal its wound and rededicate itself to its manifest destiny.”

With the help of interior illustrator Chris Kohler and cover painter, Adam Shaw, writer R.A. Jones once again weaves a thrilled packed adventure set against the backdrop of  the Texas frontier and brings to life the pioneer men and women who crossed a vast wilderness to create a new chapter in American history.  Comanche Blood is a part of their story.