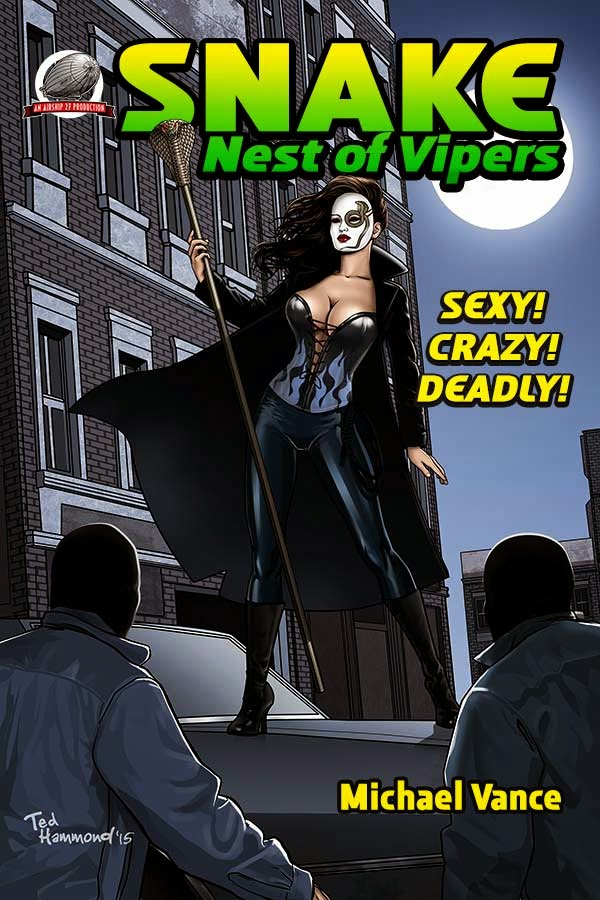 In the last few years of World War II, a group of brave Germans who opposed Hitler and his Third Reich orchestrated an underground movement that worked from within to defeat the Nazis.  These brave men and women were constantly at risk being hunted by the ruthless Gestapo.  Their fate, if captured, was agonizing torture and death.  Still they struggled on.

Six years later, in the back alleys of New York’s Bowery district, a mysterious masked avenger calling herself the Snake appears.  She recruits denizens of the street to be her agents and begins a ruthless campaign against organized crime.  Who is she and what is her connection to the events in Berlin prior to the collapse of the Third Reich?

“Michael Vance is one of the finest genre writers working today,” says Airship 27 Productions Managing Editor, Ron Fortier.  “His Weird Horror Tales trilogy received critical acclaim and last year we published his YOUNG NEMO & THE BLACK KNIGHTS, a novelization of his own comicbook series.  This time he has uncovered a lost comicbook nugget and what he has done with it is going to excite a whole lot of people.”

Based on a six-page synopsis by legendary comics writer, Richard Hughes, author Michael Vance has woven a thrilling, fast paced adventure that will keep readers guessing and on the edge of their seats from start to finish.  You’ve never met a character like the Snake.  She’s sexy.  She maybe crazy.  But she is most of all, deadly!

Posted by Ron Fortier at 7:00 AM No comments: