I was interviewed by Rose DesRochers. Check it out at http://www.rose-desrochers.net/2009/10/24/rose-desrochers-interview-with-bobby-nash.
Posted by BobbyNash at 5:03 PM No comments: 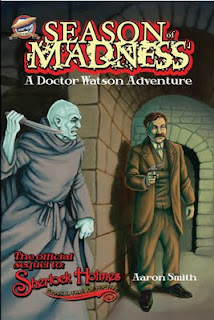 SEASON OF MADNESS (A Doctor Watson Adventure) by Aaron Smith

Airship 27 Productions and Cornerstone Book Publishers are thrilled to announce the release of a new novel starring Sherlock Holmes’ own beloved companion, Dr. Watson. This is the official sequel to the bestselling Sherlock Holmes – Consulting Detective, released earlier this year.

“After the overwhelming success of our Sherlock Holmes anthology, we knew bringing out a Dr. Watson book was a natural follow-up,” said Airship 27 editor, Ron Fortier. “Aaron Smith has turned in grand mystery, one we know Holmes fans will really enjoy.”

When a group of men and women throughout London begin exhibiting strange psychotic behavior, Dr. John Seward, from the Dracula affair, is brought into the case. Faced with a mystery beyond his realm of experiences, he turns to Sherlock Holmes’ trusted companion, Dr. Watson, for help. Together these two men of science must uncover the riddle behind a white powder drug with the ability to drive people mad before the entire population is infected.

An original, never before published mystery set against the backdrop of Victorian England by a master storyteller. Suspense and adventure await on every corner as two of literature’s most famous characters join forces to unravel a…SEASON OF MADNESS.

This book also contains a special bonus feature. THE ELECTRIC SHARK (A Hound-dog Harker Adventure). Introducing Quincy Harker of Her Majesty’s Secret Service in the first of a brand new adventure series. Harker and his friends face danger on the high seas as a long lost ship of scientific marvels returns to challenge all of mankind.

With interior illustrations by Pedro Cruz and a cover by Rob Davis and Shane Evans, SEASON OF MADNESS is another suspense filled Victorian thriller brought to you by

I was interviewed by my local newspaper, the Barrow County News, about the release of the new Lance Star: Sky Ranger vol. 2 anthology. Click on the picture for a larger view. 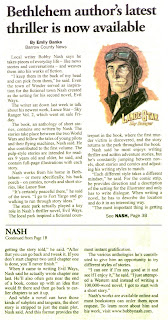 In other Lance Star: Sky Ranger news, the 1st four pages of the comic book adventure, Lance Star: Space Ranger have been posted to the Nash News blog. Check them out at http://bobby-nash-news.blogspot.com.
Ready for liftoff.
Bobby
Posted by BobbyNash at 11:39 AM No comments: 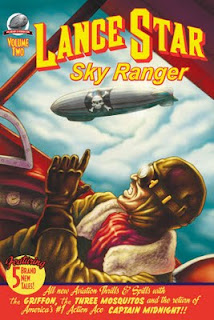 Airship 27 Productions and Cornerstone Book Publishers are buckling up for high flying pulp thrills as they announce the release of LANCE STAR – SKY RANGER Vol. Two.
Two years ago, with Volume One, this long forgotten pulp hero returned with a bang in four action packed new stories.

Once again its time to strap in to your seat belts and rev up your props, as Lance Star – Sky Ranger returns with another heaping of all out action, adventure thrills and spills high up in the wild blue yonder. And this time he’s accompanied by a handful of pulpdom’s greatest aviation heroes to include, The Griffon, The Three Mosquitos, and the undisputed Commander of the Clouds, America’s # 1 action ace, Captain Midnight!

Writers Bobby Nash, Van Allen Plexico, Aaron Smith and David Walker pull out all the stops to bring you five pulse pounding tales of brave men and their flying machines as they fight our countries deadliest foes both at home and abroad. Here, for the first time, is the origin of Captain James Charles Albright and the mission from which he would become known forever as Captain Midnight. This volume contains a brief history of all these classic pulp fliers, interior illustrations by Rob Davis and a stunning cover by Shane Evans, Lance Star – Sky Ranger Vol.Two is the high diving collection pulp fans have waiting for.

Brought to you proudly by Airship 27 Productions, pulp fiction for a new generation!
Copies are now available at Go Pulp, simply click on to the name over the cover image.