Citadel of Fear Back in Print 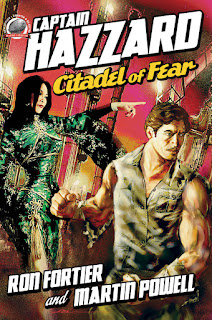 Airship 27 Productions is happy to once again announce the availability of its second Captain Hazzard adventure; Citadel of Fear by Ron Fortier & Martin Powell.

IN 2011 Airship 27 Productions parted ways with their former publisher and many of their titles soon sold out at distributors such as Amazon etc.  Eventually copies could only be found at various independent book stores selling for exorbitant prices.

“It was always our intention to get all our titles back out in these new Airship 27 editions,” explains Managing Editor & Co-author Fortier.  “Of course we have to juggle doing these reprint editions around our schedule for releasing new titles.  It’s not always an easy task.  Over the past year, many Captain Hazzard fans have written us complaining of the book’s unavailability at a fair and reasonable price.”

Fortier also notes that the remaining two Captain Hazzard novels that he has written; Curse of the Red Maggot and Cavemen of New York will also be offered in new editions as time allows.  “Obviously it’s our goal to have all of them up soon and we thank our loyal fans for their patience in this process.”

When scientists from all studies begin disappearing, Captain Hazzard and his team of adventures take up the mystery which leads them to a secluded city of wonders deep within Rocky Mountains ruled by the daughter of a would-be world conqueror.  The book is the first co-writing venture between Fortier and Powell, long time friends and features interior illustrations by Art Director Rob Davis with a stunning cover by Laura Givens.

Fortier in currently writing a fifth Captain Hazzard novel he hopes to have completed soon.

Posted by Ron Fortier at 2:41 PM No comments:

DAUGHTER OF DRACULA - The Script 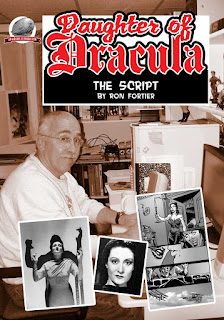 DAUGHTER OF DRACULA
The Complete Script
By Ron Fortier

Writer Ron Fortier & Artist Rob Davis will be guests at this year’s Oklahoma Writer’s Federation Conference to be held in Norman, Oklahoma May 2-4.  Further details can be found at the organizations website.

The team will be using a visual power-point slide show to illustrate the various technical aspects writing comics and the artist interpreting a script and bringing it to graphic life.  Copies of the graphic novel will be on sale at the conference as well as this recently produced book version of the comic script.

“It seemed like a natural thing to do,” Fortier explains.  “We thought writers having attended our workshops would benefit from not only having the graphic novel but the script from which it was derived as well.  This way they could compare pages from the scrip to the completed art in the comic thus underscoring the points we will be making in our presentations.”

This script book is available at Create Space – (https://www.createspace.com/4133786)

Posted by Ron Fortier at 2:34 PM No comments: 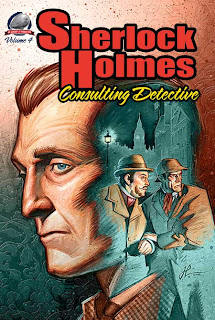 Airship 27 Productions proudly announces the release of the fourth volume in its most successful anthology series to date; SHERLOCK HOLMES – CONSULTING DETECTIVE.  “These are the books our fans keeping demanding more of,” reported Ron Fortier, Managing Editor of Airship 27.  “Readers around the world just can’t seem to get enough of the Great Detective.  Considering the popularity of shows such as SHERLOCK on BBC and ELEMENTARY on NBC, it’s clearly obvious that the crime solving team of Holmes and Dr. Watson are still as popular as ever.”

The time and place, Victorian England on the cusp of a new century where the marvels of science will spur the Industrial Revolution to new heights of cultural wonder. And yet amidst this societal upheaval, the dark elements of human kind continue to worm their way through the streets of London and its surrounding countryside.  Murder and mayhem remain and thus the work of Sherlock Holmes continues; his powers of deductive reasoning the crucial bulwark to stem this tide of villainy.

Here are five new adventures of Holmes and Dr.Watson written in the traditional style of his creator, Sir Arthur Conan Doyle.  Writers I.A. Watson, Aaron Smith, Bradley H. Sinor, Bill Thinnes and Andrew Salmon deliver a quintet of truly memorable cases to challenge the famous crime fighting duo.  From the murder of a man who collects clockwork automatons to the theft of a valued Japanese sword, our heroes are once again called into action confronting a diverse set of mysteries guaranteed to entice the world’s greatest Consulting Detective.

Fortier relishes the debut of this new volume considering the overwhelming acclaim of the first three in the series.  “Amongst those books were four Pulp Factory Award winners,” he recalls happily.  “Two for Best Pulp Short Story of the Year, one for Best Pulp Cover and another for Best Interior Artwork.  The literary and artistic bars for this series have been set extremely high and we would have it no other way.”

The Pulp Factory Awards denoting the best pulp story and art from the previous year are voted on by the members of the Pulp Factory Yahoo Group and presented to the winners each year at the Windy City Paper & Pulp Show.

Sporting a cover by Chad Hardin with interior illustrations and design by Rob Davis, the
fourth volume in this bestselling series also features a fascinating essay, “The Mystery of
Mr. Holmes,” by I.A. Watson.  Here is grand adventure as Sherlock Homes fans around
the world have come to expect from Airship 27 Productions.

PULP FICTION FOR A NEW GENERATION!

Now Available at Create Space – (https://www.createspace.com/4137813)
At the Airship 27 Website – (http://robmdavis.com/Airship27Hangar/index.airshipHangar.html)
At Amazon & Kindle within a week.
Then at Indy Planet (http://indyplanet.com/store/)

Posted by Ron Fortier at 6:46 AM No comments: 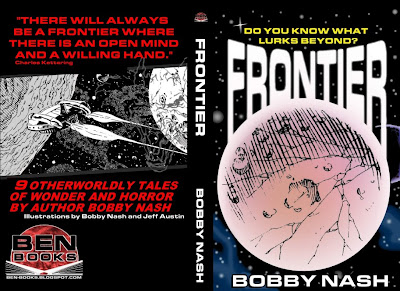 New Pulp Author Bobby Nash has announced that FRONTIER, a collection of pulpy sci fi and space opera themed stories written by him over the years will be on sale next week from BEN Books.

The author shares the contents of the book as well as an essay on the making of the book on his website. You can read Bobby’s thoughts on Frontier here.

Bobby Nash’s Frontier will be available as a paperback and in multiple ebook formats.

Keep watching this space for more.

Posted by BobbyNash at 3:28 PM No comments: 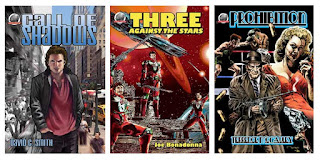 Three of the finest New Pulp Writers will be appearing at this year’s Windy City Paper and Pulp Show to autograph their new Airship 27 Productions titles on Saturday, 13th April.

Each of the three is a professional writer of note and last year released their first novels for Airship 27 Productions which will be sponsoring their appearances at the con.

DAVID C. SMITH – CALL OF SHADOWS – has written over twenty novels primarily in the sword and sorcery, fantasy and horror genres. He has written and co-authored eight pastiches featuring Robert E. Howard’s characters, including six starring Red Sonja with Richard L. Tierney. Smith, his wife, Janine, and daughter, Lily, live in Palatine, Ilinois.  CALL OF SHADOWS is the story of a modern day wizard living in Chicago today and his struggles against an evil warlock obsessed with destroying him.

JOE BONADONNA – THREE AGAINST THE STARS – has published many short stories and a novel.  He’s written several screenplays, one entitled “Magicians” is now in the hands of a director. He is a former member of the Chicago Screenwriters Network and has lectured on the history of science fiction, horror and fantasy in films. He recently sold a novella, “The Order of the Serpent,” to Weird Tales Magazine.  THREE AGAINST THE STARS is a fast paced military sci-fi actioner set against the landscape of an alien empire and mankind’s struggles to secure a foothold amongst the distant galaxies.

TERRENCE McCAULEY – PROHIBITION – a New York resident, he has sold dozens of short stories for various anthologies and is a devotee of noir films particularly those set in New York. His protagonist in PROHIBITION is former professional boxer Terry Quinn, now an enforcer for the Irish Mob in Hell’s Kitchen.  Later this year, a prequel story detailing Quinn’s fighting days will be featured in the highly popular New Pulp series, FIGHT CARD from editor/publisher Paul Bishop.

All signings will take place on Saturday April 13th at the Airship 27 Productions tables.
The schedule is as follows –

Now in its 13th year, the Windy City Paper & Pulp Show is one of the premier gatherings of pulp, comics and paperback collectors in the country.  The show runs from April 12-14.  You can learn more about the con, its location and how to register at their on-line site.  (http://windycitypulpandpaper.com/home/)

Airship 27 Productions was created six years ago by writer Ron Fortier and artist Rob Davis to support pulp fandom by producing new pulp fiction starring classic and new pulp heroes in both novels and anthologies.  Since their beginning Airship 27 Productions has published over fifty titles featuring some of the finest professional writers and artists while at the same time providing a showcase for newer talent.  Today their titles are available at Amazon, many on Kindle and they offer audio recordings several books.  You can learn more about the company at their on-line site.
(http://robmdavis.com/Airship27Hangar/index.airshipHangar.html)