A (Not So) Silent Interview with Bobby Nash at ComicBooked. 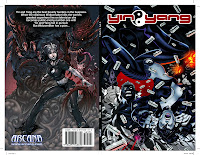 A (Not So) Silent Interview with Bobby Nash at ComicBooked.
http://www.comicbooked.com/a-not-so-silent-interview-with-bobby-nash/comment-page-1
Posted by BobbyNash at 9:59 PM No comments:

Yin Yang, a graphic novel by Bobby Nash and Luis Ruben Rivera Nunez is now in Previews for a September 2010 release from Arcana Studio (http://www.arcanacomics.com/comicdisplay.php?id=60)

Yin and Yang are the best bounty hunters in the business. When the villainous Widowmaker kills the world's greatest superhero live on television she becomes public enemy number one with Yin and Yang hot in pursuit. But Widowmaker has a plan...

Yin Yang is the story of brother and sister super-powered bounty hunters named Yin and Yang. They are the best in the business. No one escapes them. Working for dedicated Federal Marshal, Wade Kendall, Yin and Yang go after meta humans who use their powers to live above the law.

The coupon above contains all the pertinent information. Just print, clip, & give it to your local comic shop and they will happily order it for you. 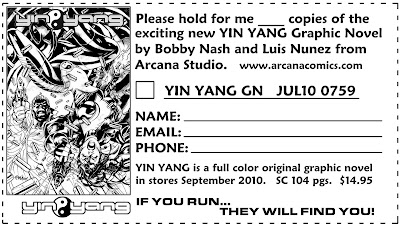 You can read a free 5 page preview at http://www.arcanacomics.com/comicdisplay.php?id=60

Yin Yang is currently available for digital download at Wowio for $4.95 http://www.wowio.com/users/product.asp?BookId=6065

Check http://bobby-nash-news.blogspot.com for information and updates.

Posted by BobbyNash at 1:34 PM No comments: 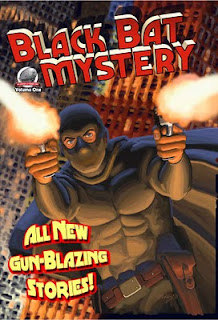 HE OWNS THE NIGHT!

One of the most original heroes in all of pulpdom returns in four brand new gun-blazing adventures crammed packed with action and adventure. The mysterious Black Bat once again patrols the urban jungle, his targets, those who would prey on the weak the helpless. Crusading District Attorney, Anthony Quinn, was scarred and blinded by gangland hoods. When an experimental transplant operation restores his sight, it also grants him the ability to see in the dark! Allowing the public to continue believing he is a harmless, blind attorney, Quinn invents a new identity, that of the crime fighting avenger known as the Black Bat! With a trio of loyal aids, Carol Baldwin, Silk Kirby and Butch O’Leary, he launches his campaign against the forces of evil.

The Black Bat first appeared in the pages of his own magazine, Black Book Detective. The author was G.Wayman Jones. It would run for 62 issues from July 1939 to Winter 1953 and become one of the most popular pulp heroes ever created.

From a giant Nazis bred monster to a gun-slinging Commie assassin, here are four original tales by today’s finest pulp writers; Andrew Salmon, Aaron Smith, Mark Justice and Frank Schildiner starring the Master of the Night. Once again the Black Bat is thrilling pulp fans with his daring exploits. Long considered the template from which dozen of comic book heroes were inspired, to include Marvel’s Daredevil and DC’s Batman, the Black Bat is truly one of the most unique characters ever born of the pulps. Featuring a cover by Mark Maddox, with designs and interior illustrations by Rob Davis, BLACK BAT MYSTERY is a must for all action-loving pulp fans. Airship 27 Productions; Pulp fiction for a new generation!
ISBN: 1-934935-71-9
ISBN 13: 978- 1-934935-71-2
Produced by Airship 27
Published by Cornerstone Book Publishers
Release date: 06/11/2010
Retail Price: $24.95
Posted by Ron Fortier at 7:22 AM No comments: