IMARO CREATOR JOINS AIRSHIP 27 PRODUCTIONS
Charles R. Saunders, one of the most respected fantasy adventure writers in the field, has joined Airship 27 Productions to create a black pulp hero.  Saunders is best known for his series of novels featuring Imaro, the black warrior of an ancient, mythological Africa.  His work has been compared to being equal parts Robert E. Howard and J.R.R. Tolkien.
Saunders and Airship 27 Editor, Ron Fortier, have been friends for many years.  Saunders had been working for company which packages titles for Cornerstone Book Publishers as a proof-reader.  It was the beginning of his first exposure to the world of pulps.  One he enjoyed a great deal.  Enough to offer Fortier an idea for a novel featuring a 1930s black avenger along the lines of the Shadow and the Spider.
“I was ecstatic when Charles brought up the idea,” says Fortier.  “One of the less savory aspects of the pulps was their inherent racism.  The pulps of the 1930s reflected a prejudicial ignorance that was representative of the country’s attitude during those times.”  Today’s modern pulp writers and editors often grapple with this sensitive issue as whether or not to depict it accurately in their stories.  Some opt to ignore it altogether.
“So that was the challenge,” Fortier continues.  “Could Charles give us an African American hero and make it work in an authentic 1930’s New York setting?”
DAMBALLA, the name of the book, is Saunders’ response to that question. Cast in the mold of the classic pulp heroes, the noted author describes his new character as the 30s version of a well known cinema tough guy.  “Damballa, like John Shaft, ‘will risk his neck for his fellow man,’” says Saunders. “The difference is, Damballa wears a cloak instead of leather jacket, and uses both ancient African wisdom and modern science in his battle against injustice.”
Airship 27 Productions plans to release this ground breaking pulp thriller in the Spring of 2011.
Posted by Ron Fortier at 12:07 PM 3 comments:

Bobby will be a guest at the first Wizard World Atlanta Comic Con on December 4 - 5, 2010. He will have copies of his books on hand including new releases Yin Yang and lance star: Sky Ranger "One Shot!"

If you’re at the show please stop by Bobby’s table and say hello.

For more information on the convention, please visit http://www.wizardworld.com/home-atlanta.html

Posted by BobbyNash at 8:58 AM No comments:

I was interviewed by Wise Words where I talk writing, pulps, and Lance Star: Sky Ranger.
Give it a read at http://louisewise.blogspot.com/2010/11/buckle-up-for-bobby-nash-pulp-fiction.html

Bobby
Posted by BobbyNash at 2:25 PM No comments:

Check out episode 41 at http://thebookcave.libsyn.com

Bobby
Posted by BobbyNash at 7:50 PM No comments: 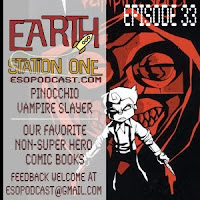 The great folks over at the Earth Station One podcast invited me to sit in on this week's show.
Episode 33: Look Kids, Comics.
Check it out at http://erthstationone.wordpress.com/2010/11/12/earth-station-one-episode-33-look-kids-comics
Bobby
Posted by BobbyNash at 11:00 PM No comments:

DAWN
Of The
MYSTERY MEN
(& Women)
Airship 27 Productions & Cornerstone Book Publishers are thrilled to present the next wave in all out action pulp avengers as created by today’s finest pulp writers. During the golden days of American pulps hundreds of masked avengers were created to battle evildoers around the globe.  The Black Bat, Moon Man, Domino Lady, and the Purple Scar to name only a few of these amazing pulp heroes.  Now Airship 27 Productions introduces pulp readers to brand new pulp heroes cast in the mold of their 1930s counterparts.  Get ready for high octane thrills and adventure with…
THE BAGMAN by B.C. Bell - A former street thug, Frank “Mac” MaCullough now fights the very gang bosses her grew up admiring in defense of the poor and helpless in his Chicago neighborhood.  RED VEIL by Aaron Smith - When her beloved cop husband is gunned down and the police refuse to investigate, Irish immigrant Alice Carter downs red widow’s garb and dishes out her own brand of justice. GRIDIRON by David Boop - Crippled by the mob for not throwing a game, star football player Gordon “Gory” Burrell is tragically transformed into a bizarre metal man.  Accepting his fate, he vows to destroy those who prey on the weak. DUSK by Barry Reese - Haunted by a brutal past, Sue Timlin dons a mask and becomes judge, jury and executioner to those villains the law cannot touch, all the while maintaining a unique secret that gives her the upper hand in her war on crime.
Here are four brand new action-packed pulp thrillers starring bizarre, original heroes to thrill and excite pulps fans everywhere.  Features a cover by the amazing Ingrid Hardy, with interior illos and design by Rob Davis and edited by Ron Fortier.  All brought to you by Airship 27 Productions – Pulps for a new generation!
ISBN:  1-934935-79-4
ISBN 13:  978-1-934935-79-8
Produced by Airship 27
Published by Cornerstone Book Publishers
Release date: 11-12-10
Retail Price: $21.95
Available at on-line store (http://www.airship27.com/)
Posted by Ron Fortier at 1:27 PM No comments: