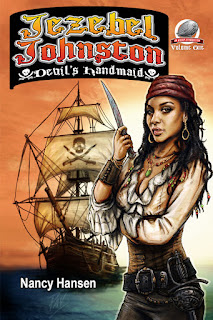 Airship 27 Productions takes to the high seas with the release of its first ever pirate novel; JEZEBEL JOHNSTON – Devil’s Handmaid by writer Nancy Hansen.

Born on the pirate island of Tortuga, fourteen year old Jezebel Johnston is a beautiful mulatto sired by an English privateer named Long Tom Johnston and Mofina, the Madame of a well known bordello.  For most of her young life, Jezebel was mesmerized by her father’s stories of life on the high seas.  Eventually he sailed off on a new adventure and never returned.

Frustrated by her own boring existence, Jezebel conceives of a daring plan to escape the island.  She disguises herself as a boy and signs aboard the pirate ship, Devil’s Handmaid, captained by the notorious Dandy Dan Abrams.  Her disguise works and within hours she sailing away from all she knows as she boldly challenges the dangers and threats that lie before her.

Writer Nancy Hansen tells a story of clashing empires all seeking to expand their dominions into the New World.  Amidst this expansion of wealth and influence, the pirates of the Caribbean were borne, a savage fraternity of outlaw sailors, murderers and scalawags who ruled the seas.  Now comes the saga of a young girl willing to share their tempestuous adventures, cutlass for cutlass, until one day she will become the greatest pirate queen of them all.

“I’ve been a big fan of Nancy’s writings for several years,” says Airship 27 Productions’ Managing Editor, Ron Fortier. “When she contacted us about this new book, I was thrilled. We’d never done a straight up pirate novel and getting one from such a talented writer was our good luck.”  Meticulously researched, JEZEBEL JOHNSTON – Devil’s Handmaid is the first in a series and kicks off with a gorgeous cover by Terry Pavlet and interior illustrations by Airship 27 Art Director Rob Davis.  Fortier ends with, “Adventure fiction doesn’t get any better than this.” 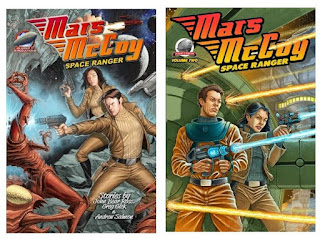 Airship 27 Productions is thrilled to announce that its two Mars McCoy Space Ranger will be the first of their titles to be adapted to audiobooks by Radio Archives.  Both volumes will be read by voice actor Patrick Nolan and are now in production.

Created as homage to the classic space pulp heroes ala Flash Gordon and Buck Rogers, the Mars McCoy stories are past paced, action heavy adventures as Captain McCoy and his beautiful android Lt. Betty-12 travel the galaxies aboard their fighter cruiser, the Black Bird Five bringing law and order to the spaceways.

Volume one contains stories by John Bear Ross, Greg Gick and Andrew Salmon, with volume two featuring two novella tales; one by James Palmer and one by Van Allen Plexico.

“Naturally we were all anxious to see which of our titles Radio Archives would choose first,” says Airship 27 Productions Managing Editor Ron Fortier.  “And honestly, we couldn’t be happier.  More will be forthcoming when the audiobooks are available for sale.”

AIRSHIP 27 PRODUCTIONS – PULP FICTION FOR A NEW GENERATION!
Posted by Ron Fortier at 4:34 PM No comments: 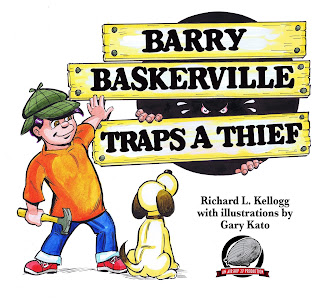 RETURN OF THE BOY DETECTIVE

Airship 27 Productions is proud to announce the release of its third children’s book series starring Barry Baskerville; the boy who idolizes Sherlock Holmes.  “Barry Baskerville Traps a Thief,” is the third installment in this bestselling series from one of the premier publishers of New Pulp Fiction. Written by Prof. Richard Kellogg, the character’s creator and avowed Sherlock Holmes enthusiast with colorful artwork by Hawaiian based graphic artist, Gary Kato.

The series debut in 2013 with “Barry Baskerville Solves a Case” and was an immediate favorite amongst both teachers and Sherlock Holmes fans. It went on to receive wonderful reviews lauding the educational aspects of the book. The following year saw the release of book two, “Barry Baskerville Returns,” and it was also praised by parents and teachers alike.

“Prof. Kellogg tells engaging stories that challenge his young readers,” says Airship 27 Productions Managing Editor Ron Fortier. “Not only are they entertained by Barry’s crime solving antics, but along the way taught the importance of logic and reasoning. It is this win-win combination that have made the books so popular. We are extremely excited to be releasing the third adventures.

In “Barry Baskerville Traps a Thief,” the young boy detective has to solve the mystery of who is stealing items from people’s front porches in his neighborhood. With the help of his parents and the local police, young Barry begins gathering clues and energetically follows them to unmask the culprit.  “Along with Prof. Kellogg’s whimsical tale,” adds Fortier, “we have a book full of beautiful, colored illustrations by an industry pro in Gary Kato. Fans of the series will not want to miss this new entry.”

Posted by Ron Fortier at 9:01 PM No comments:

Airship 27 Productions, one of the best known of the New Pulp publishers today, is joining forces with Radio Archives, the leading voice in audiobooks to bring their action/adventure pulp titles to the exciting world of audiobooks.

“We couldn’t be happier about all this,” says Airship 27 Productions Managing Editor, Ron Fortier. “I love great storytelling in any media and have been a big fan of Radio Archives for several years now. How they bring books to life is simply fantastic and brings to mind memories of the golden days of radio.”

Airship 27 Productions was launched over ten years ago by Fortier, a veteran comic book and fantasy writer, along with his partner, professional graphic artist, Rob Davis, who serves as the company’s award winning Art Director. With over a hundred titles in their catalog, Airship 27 Productions is fueled by a stable of over fifty of the finest new pulp writers in the field and a cadre of over thirty amazing artists who provide the books’ interior illustrations and stunning covers for which they are recognized.

Initially begun to create new adventures of classic pulp heroes that had fallen into public domain, Airship 27 quickly expanded its subject matter allowing writers to whip up brand new heroes while at the same time delving into the popular worlds of such classic characters like Sherlock Holmes and Sinbad the Sailor.

“This new venture seems logical,” Fortier continues, “in the next evolutionary step for New Pulp. Radio Archives, under Tom Brown’s inspired leadership, has proven what they can do with classic pulp, now we’re all going to get to see them weave their unique magic on New Pulp. We couldn’t be more excited.”

Tom Brown of Radio Archives commented “We couldn’t be happier to work with Ron and Rob. You can see the passion they have in every book they publish. They are having a lot of fun.”

Tom further said “Audiobooks have been around for 40 years and are just becoming discovered in the last few years. With over a billion Smart Phones that can play audiobooks along with Amazon heavily promoting audiobooks combined with an average 53 minute commute per day is causing the audiobook field to explode.”

Five years ago only 10% of books had an audiobook version and I believe that number will increase to 90% in the future. Customers now expect a successful publisher to offer an eBook and audiobook version along side their print books.”

As specific titles are chosen, both Radio Archives and Airship 27 Productions will continue to promote each as they become available via press releases and other media marketing tools.
Posted by Ron Fortier at 12:14 PM No comments:

CLAWS OF THE GOLDEN DRAGON 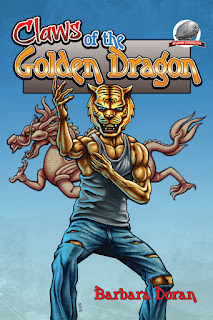 Airship 27 Productions is proud to announce the release of a new “Asian” themed pulp thriller by a super talented newcomer to the field of New Pulp Fiction, Barbara Doran.

When a mysterious evil force known only as the Voice begins to take control of the local mobs in the coast city of Strikersport, two new heroes appear on the scene.  Their origins, the neighborhood streets of Chinatown.  The masked Tiger and Dragon wield both science and magic in their battle to combat the forces of darkness.  Soon several of the city’s prominent citizens become players in this cataclysmic war. These include a wealthy family with roots to Strikersport history, a rookie cop and a crusading newspaper editor.

“Ms Doran approached us at Pulp Fest last year,” recounts Airship 27 Productions Managing Editor Ron Fortier. “She was interested in our line up of titles and had heard about our producing the first ever black avenger character, Dambala, by author Charles Saunders. After picking it up, she inquired if we’d be interested in material featuring characters of oriental heritage.” Fortier and Ms Doran exchanged contact information and months later he received a digital copy of the manuscript for “Claws of the Golden Dragon.” “It was like nothing that had ever come across my desk before,” Fortier adds. “I knew immediately we had another winner on our hands.”

Writer Barbara Doran spins a classic pulp adventure with breakneck pacing, original characters and a convoluted plot that will keep readers guessing to the very end.  Mixing martial arts with Chinese mysticism, she offers a truly unique action mystery sure to entertain readers.The books features nine interior illustrations by professional Hawaiian based illustrator, Gary Kato, with a cover by New Zealander Shane Evans. As ever, Airship 27 award winning Art Director Rob Davis provided the book’s design. “We’ve pretty much got an international team on this one,” Fortier finishes. “All working towards delivering a truly unique New Pulp fiction reading experiences. Our fans are going to love “Claws of the Golden Dragon.”