THE PRIDE OF THE MOHICANS 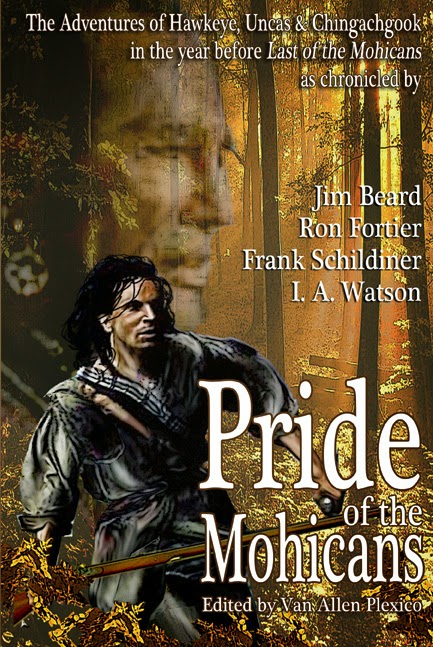 White Rocket Books releases THE PRIDE OF THE MOHICANS.  Stories of Hawkeye, Chingachgook and Uncase before the events in LAST OF THE MOHICANS. Stories by Jim Beard, Ron Fortier, Frank Schildiner & I.A. Watson.
Features a cover by Laura Givens.
Edited by Van Plexico

Posted by Ron Fortier at 7:13 AM No comments: 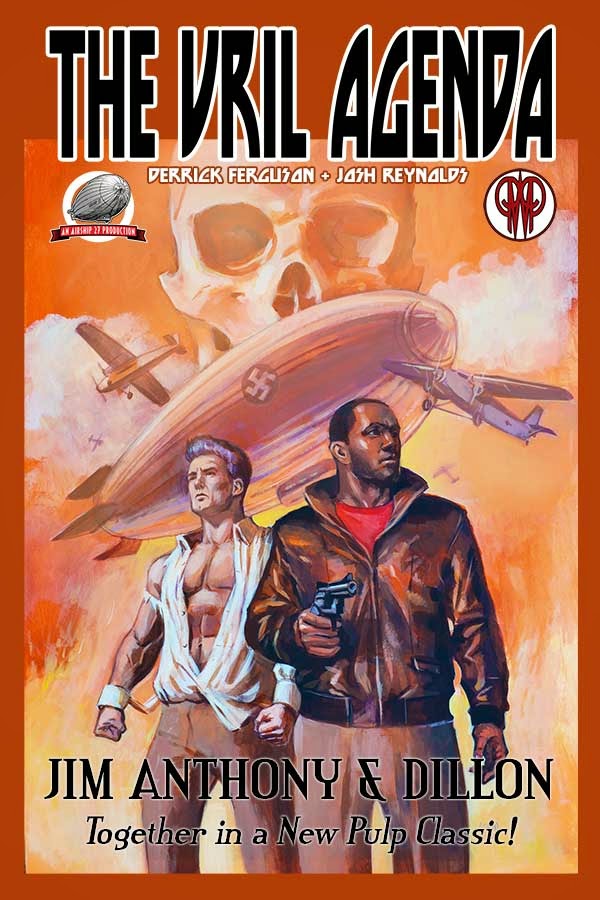 Airship 27 Productions & Pulp Work Press join forces for the very first time to announce the release of THE VRIL AGENDA, a fantastic, action packed pulp adventure by two of the finest writers in the New Pulp field, Joshua Reynolds and Derrick Ferguson.

Upon completing his training with the Warmasters of Shamballah, Dillon journeys back to America to begin the next phase of his training under tutelage of one of the greatest adventurers of all time, Jim Anthony – The Super Detective.  But no sooner do they meet then one of Anthony’s most dangerous villains resurface from his past to once again threaten mankind, the superhuman Sun Koh – Prince of Atlantis.

Now the old warrior and his young student, aided by Anthony’s loyal family and allies, will take on this new threat, pitting their lives against powerful adversaries.  From New York to Berlin and then on to a hidden civilization at the bottom of the world, the Super Detective and his two-fisted protégé must stop the fiendish Sun Koh before he can unlock the ages old secret of the Vril power.

“I’ve been a huge fan of Derrick’s Dillon from day one,” reports Airship 27 Managing Editor, Ron Fortier.  “And of course Josh has dons several Jim Anthony projects for us including a full length novel. So when they first proposed this team-up book, I was thrilled beyond words.”

Writers Josh Reynold and Derrick Ferguson have whipped up a frenetically paced tale that never lets up for second, masterfully delivering old fashion pulp action in what is sure to become a New Pulp Classic! 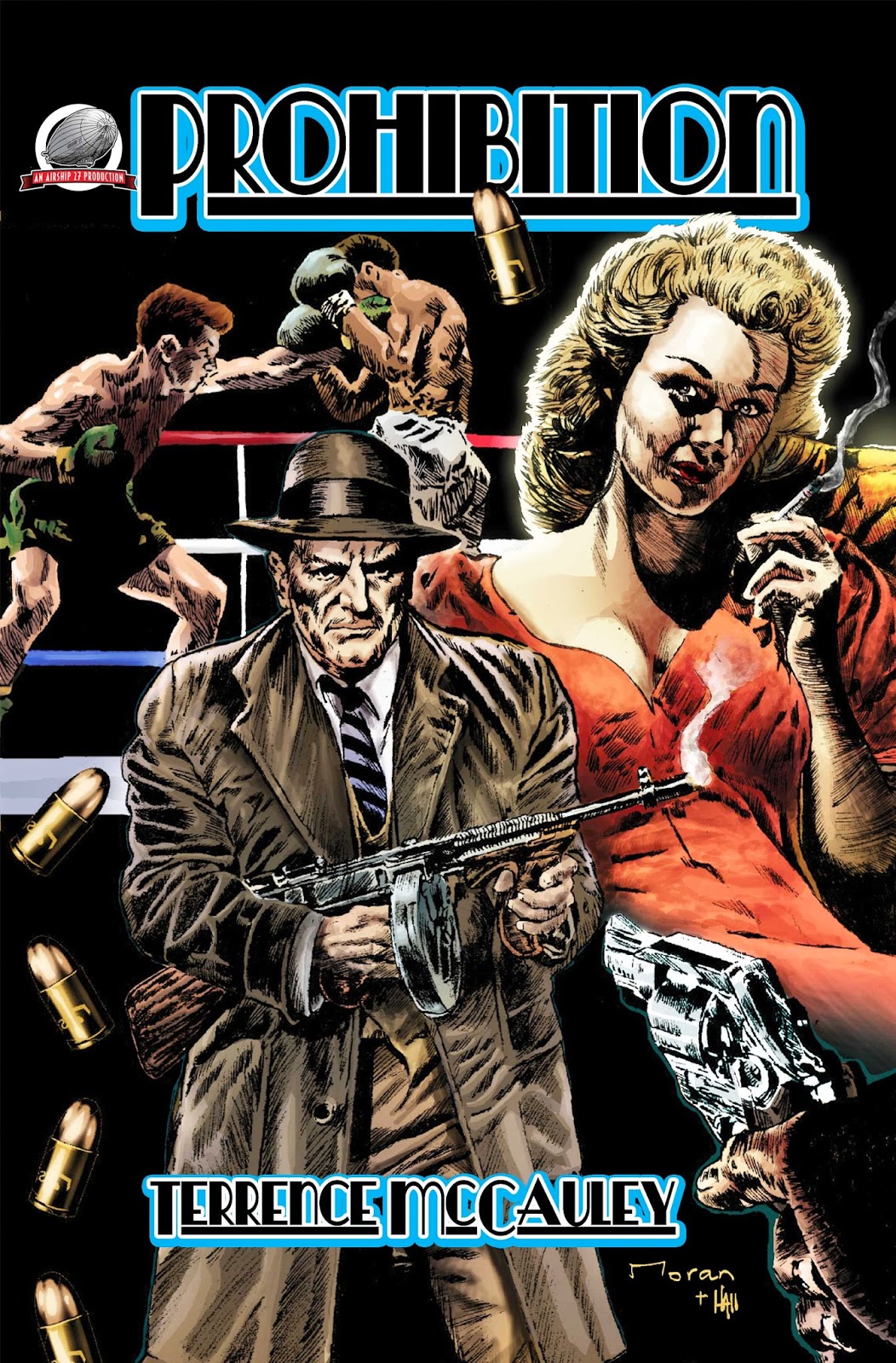 LAST CALL FOR PROHIBITION! We've just received great news that writer Terrence McCauley is about to sign with a major New York publisher who will be doing all brand new editions of his prize winning novels. We couldn't be happier for him. Effectively on Tuesday 15 April, we will be removing the title from our catalog and no longer selling it anywhere; at Amazon or our website. Meaning pulp fans, you've five days left to pick up what is sure to become an Airship 27 Highly limited and collectible edition of this wonderful novel by this up and coming author.

Captain Ron
Posted by Ron Fortier at 3:20 PM No comments: 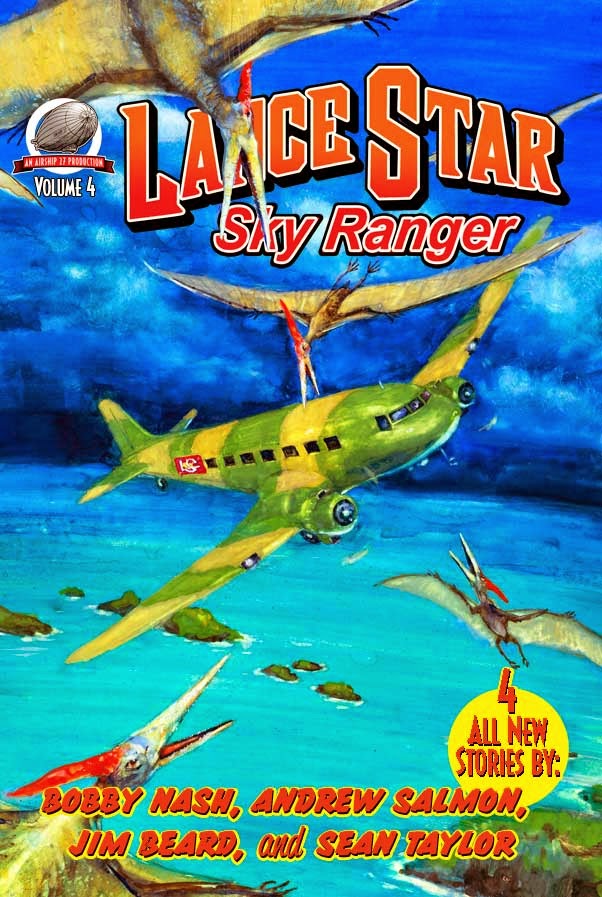 Airship 27 Productions announces the release of its newest pulp anthology.  Rev up those Pratt-Whitney engines, pull back on the stick and prepare for take-off, as LANCE STAR – SKY RANGER gets ready to soar into the clouds in this, his fourth volume of high flying adventures.

Once again its time to join America’s aviation ace, Lance Star and his faithful team; Buck Tellonger, Cy Hawkins, Jim Nolan and Red Davis as they fly into four brand new hair-raising tales.  From discovering a hidden Nazis base on lost South Seas Island inhabited by prehistoric monsters to foiling an assassination attempt on President Roosevelt, the Sky Rangers travel globe tackling danger wherever they go.

The Lance Star – Sky Ranger series follows in the grand tradition of popular pulp favorites and Dusty Ayers, Bill Barnes, G-8 & His Flying Aces and dozens of other winged warriors of the clouds.

“When you’re company name is Airship 27 Productions,” says Managing Editor Ron Fortier, “you’d better believe we have a real love of flying heroes and Lance Star-Sky Ranger is at the top of that list.”

So goose your fuel lines, spin the props of your Skybolts and Skeeter and prepare yourself for classic pulp action.  Writers Bobby Nash, Sean Taylor, Andrew Salmon and Jim Beard have delivered a quartet of fast paced, high soaring stories to keep you buckled up tight.

This volume features a cover by popular graphic artist, Felipe Echavarria with interior illustrations by Warbirds of Mars’ own Scott “Doc” Vaughn. 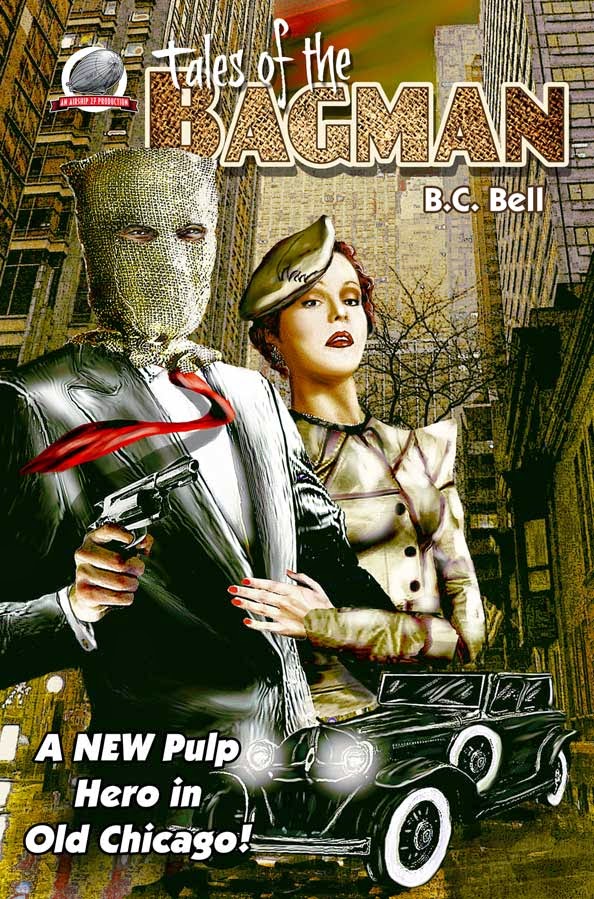 Long out of print, the new Airship 27 Production of Chris Bell's original TALES OF THE BAGMAN is now in print and available at Amazon, with the Kindle soon to follow.

Captain Ron
Posted by Ron Fortier at 12:25 PM No comments:

THE RETURN OF CAPTAIN ACTION! 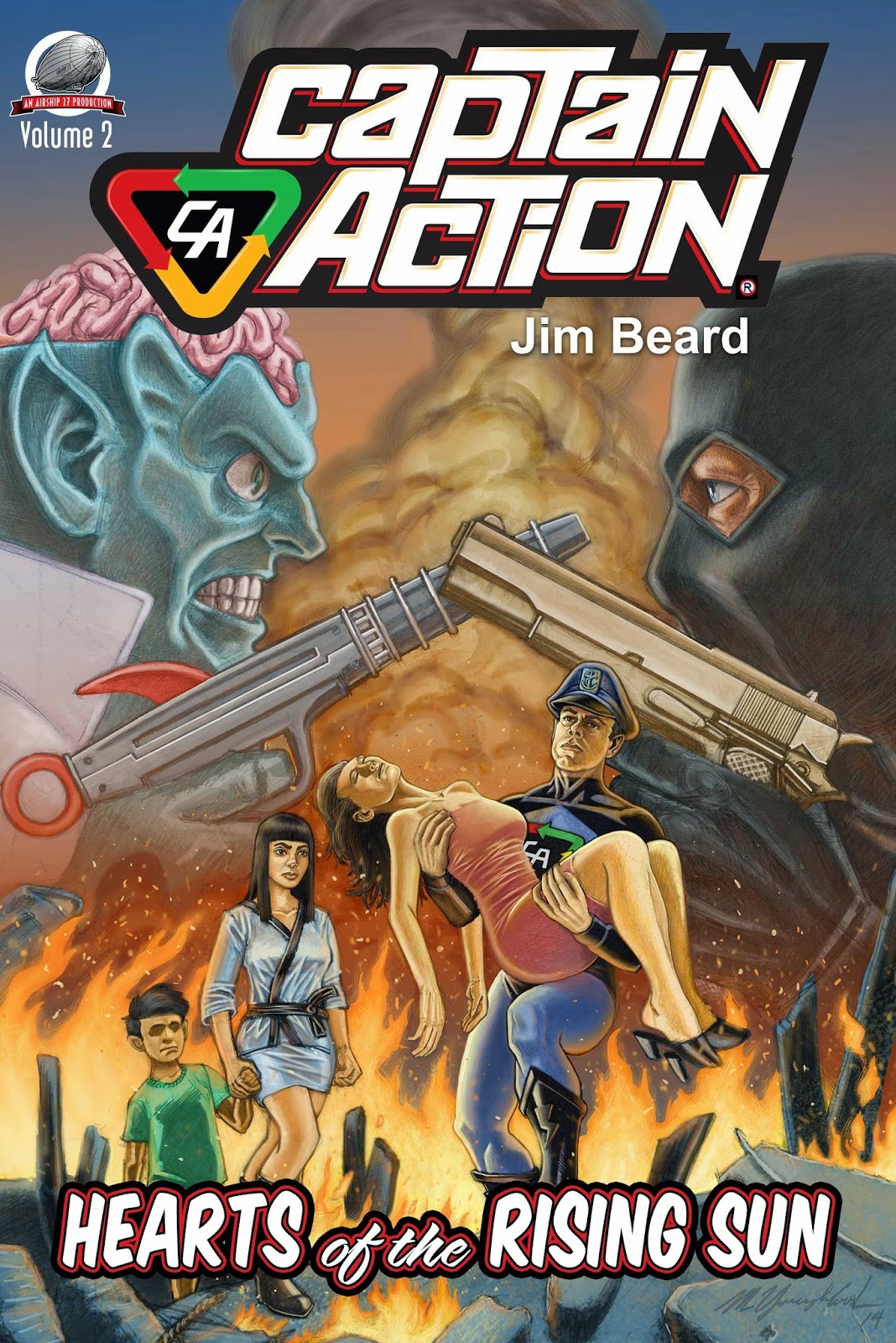 Airship 27 Productions, in partnership with Captain Action Enterprises, is thrilled to announce the release of its second Captain Action pulp novel, “Hearts of the Rising Sun” by Jim Beard.

“The response to our first Captain Action novel, “The Riddle of the Glowing Men,” was so positive, we were anxious to get this sequel out to the fans,” says Airship 27 Productions Managing Editor, Ron Fortier.  “In this second adventure, Jim moves the saga to Far East in the year 1968.”

While on assignment in Japan, Captain Action is haunted by the woman he loved and lost years ago in the underground kingdom beneath Siberia.  When she mysteriously begins reappearing during his clandestine mission to witness a newly discovered power source, agent Miles Drake begins to question his own sanity.

Forces are at work to steal two naturally formed energy stones whose limitless power in the wrong hands could destroy the world. When he begins to suspect his alien nemesis, Dr. Evil, is behind these attacks, Drake has to utilize his most daring disguises ever to learn the truth and ally himself with an old vigilante hero from the past.

Now the one and only Captain Action must walk a delicate tightrope between old and new allies while attempting to discover the source of the threat to the Hearts of the Rising Sun.  If he fails, mankind is doomed!

Ed Catto, of Captain Action Enterprises, chimes in enthusiastically.  “We had said Jim Beard’s first Captain Action pulp story was like an Ian Fleming story starring Doc Savage.  This new one ratchets it up another level, an international espionage thriller with a dash of Hitchcock mystery and glamour.”

“Hearts of the Rising Sun,” ties in seamlessly with the continuity of Dynamite’s Codename : Action series,” adds Joe Ahearn, also of Captain Action Enterprises.  “2014 looks to be a very big year for Captain Action with two comic series, a new Lady Action and lots more collectible toys due this holiday season.”

The popularity of Captain Action has never been greater with the release of CAPTAIN ACTION – HEARTS OF THE RISING SUN, his appeal to today’s pulp fans continues to grow.

Available now at Amazon in both hard copies and on Kindle.

Posted by Ron Fortier at 7:09 AM No comments: