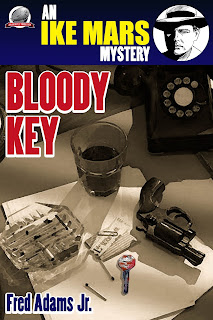 Airship 27 Productions is thrilled to announce the release of a new Fred Adams Jr. Mystery here in “Ike Mars – Bloody.” Pittsburg private eye Ike Mars was struck by lightning twice.  Now he can change his face to look like anybody else. An enviable talent for any investigator. When a small time hood dies in Mars’ arms, after having been shot, he leaves the Mars with a small, key covered in blood.

The street-smart shamus safely assumes the man was killed by people after that key. So, the question is why is it so important as to be worth a man’s life? What mystery does it unlock and how much danger is Mars in now that he possesses it?

Once again, pulp scribe Fred Adams, Jr. launches another thrilling mystery series with this novel starring one of the most unique characters ever to walk the midnight streets of crime novels.

Artist James McFarland handles the interior illustrations and Rob Davis the cover. This is new pulp fiction at its finest. 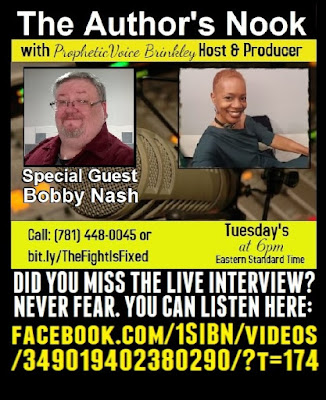 Big thanks to THE AUTHOR'S NOOK's host, Vanessa "Prophetic Voice" Brinkley for having me and my crackly voice on LIVE tonight! I had a lot of fun talking about writing, Evil Ways, and the Snow series. If you missed us live, you can still check out the interview HERE.

Posted by BobbyNash at 5:07 PM No comments: 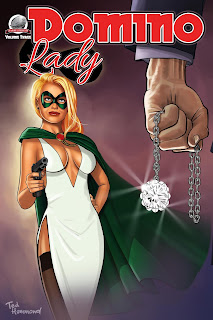 Airship 27 Productions is thrilled to announce the release of “Domino Lady Vol 3.”
Pulpdom’s sexiest masked avenger returns in five new adventures courtesy of writers Adam Mudman Bezecny, Gene Moyers, Brad Mengel and Samantha Lienhard. By day she is wealthy Los Angeles socialite Ellen Patrick. By night she dons her mask, cape and arms herself with a hypodermic syringe and deadly silver plated automatic to become the beautiful and mysterious vigilante known only as the Domino Lady.

In this volume she uncovers a secret female society also combating evil; a plot to take over rich wineries, confronts a blackmailer, defends a Hollywood union against gangsters and solves a friend’s murder.

“Domino Lady is arguably the most well known of the classic female pulp heroes,” says Airship 27 Productions’ Managing Editor, Ron Fortier. “Fans can’t get enough of her adventures and we are delighted to satisfy their demands.” Dressing up this third volume is the same super talented art team that was responsible for volumes one and two. James Lyle provides all the interior black and white illustrations, while Ted Hammond delivers another stunning, colorful cover. All neatly assembled by award winning Art Director Rob Davis.

When it comes to spills and thrills, defending innocent people and thwarted the bad guys, it is all in a night’s work for the one and only, Domino Lady.

Available from Amazon in both paperback and on Kindle. 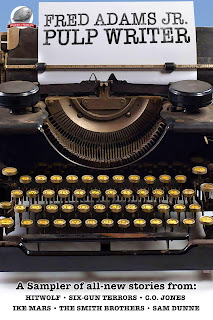 Airship 27 Productions is proud to showcase the work of New Pulp’s most talented and prolific writer, Fred Adams Jr.  A retired college teacher, Adams burst on the New Pulp scene several years ago with his novel “Hitwolf,” from Airship 27 Productions. It tells the story of a Green Beret captured by Mob in the 1970s and turned into a werewolf assassin.

“The concept is so what pulp is all about,” claims Airship 27 Productions Managing Editor, Ron Fortier, “that when I first read the concept I was euphoric. We couldn’t publish it fast enough. Later Fred sent me his very first novel, a mystery entitled, ‘Dead Man’s Melody,’ and we happily put that out.” What Fortier didn’t realize at the time was both books were intended to be the first entries in on-going series.

By the time Adams had submitted “Six-Gun Terrors,” a story about two Texas cowboys who encounter supernatural monsters, the writer’s master goal had become obvious.  “He wanted to produce as many on-going series as he was capable of writing,” Fortier explains.

Following on the heels of those first three series debuts, Adams then offered up C.O. Jones, a World War II veteran who, during the war years, belonged to an elite squad that dealt primarily with magical threats to the Allies.  After several C.O. Jones novels, came
“The Eye of Quang Chi,” a mystery set in San Francisco during the turn of the century and starring the co-joined Chinese-American Smith Brothers.

Adams latest pulp series features Ike Mars, a 1950s private eye who was struck twice by lightning. The result of these near-death events left his face malleable enough that he can mold his features to look like other people for a short time. “Shades of the Avenger,” thought Fortier, when editing the first Ike Mars manuscript.

It became clear to Fortier and Airship 27 Art Director, Rob Davis, that Adams prodigious volume of great pulp stories should be showcased in a way as to draw attention to all these various series. The answer to that challenge was to produce a “sampler” collection and they put the idea to Adams. He was only too happy to participate and thus, the new “Fred Adams Jr. – Pulp Writer” features six brand new pulp thrillers culled from his current six on-going Airship 27 series.

“We had a blast putting this book together,” Fortier sums up. “Rob did all the interior illustrations and the cover. It is our hope the book will show fans of his work some of the other series they may missed, as well as make him lots of new readers.”

The astounding epilogue, according to Fortier, is that Adams is currently creating a seventh series. “Fred Adams Jr. is pulp writing machine!”

Available from Amazon in paperback and on Kindle. 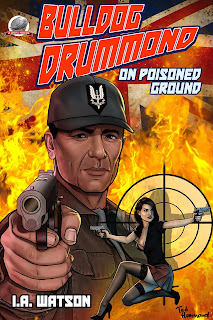 Airship 27 Productions is thrilled to announce the return of one of pulpdom’s most well known heroes, Bulldog Drummond, in “On Poisoned Ground” by writer I.A. Watson.

London 2018 - Upon his discharge from the military, Captain Hugh “Bulldog” Drummond finds civilian life boring. He post an ad in the London Times explaining his desire to find new adventures. Much to his surprise, he gets much more than he could have ever bargained for and soon finds himself battling an evil genius bent on destroying all of London. This is a threat he can’t possibly win alone and soon he has recruited his former S.A.S team, unique men with special skills that just might save the day.

“This is  a brand new version of a classic hero, reinvented for our times and jam-packed with suspense, thrills and danger enough to fill a half dozen books,” reports Airship 27 Productions’ Managing Editor Ron Fortier. “The original Bulldog Drummond was created by H.C. McNeile and published under his pen name "Sapper". Following McNeile's death in 1937, the novels were continued by Gerard Fairlie. The character has appeared in novels, short stories, on the stage, in films, on radio and television, and in graphic novels.”

Last year Fortier was approached by one of his Airship 27 writers from India who was a fan of the character and inquired if it would be possible to revive him as a New Pulp hero. Fortier immediately reached out to British author, I.A. Watson, a writer known for his exhaustive research in any project he undertakes. “Ian thought the idea was worth pursuing and ultimately discovered the property was indeed public domain,” Fortier continues. “After several long letters on how to do the character properly, both of us agreed a new, modern interpretation was called for. At which point I gave Ian the green light to write the first adventure in what we hope will be a long running series at Airship 27 Productions.”

“Bulldog Drummond – On Poisoned Ground,” features black and white interior illustrations by professional graphic illustrator, Howard Simpson, and sports a wonderful cover by Canadian Ted Hammond. The book design was by Art Director Rob Davis. The story is a roller-coaster ride of action and adventure. Fortier concludes, “Once you open page one, you will not be able to put this book down.” 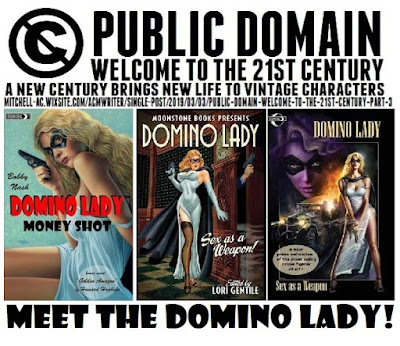 The Pulp Factory's own Bobby Nash returns for the third installment of my blog series on the Public Domain over at author Adam C. Mitchell's site. In part 3, I introduce you to one of my favorite public domain characters... Meet The Domino Lady HERE!

Part 1 and Part 2 are still available!

Posted by BobbyNash at 5:07 PM No comments: