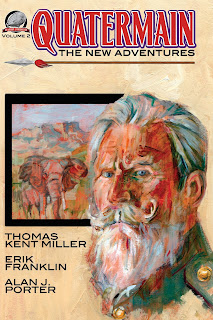 Airship 27 Productions announces the release of their latest title featuring a beloved action adventure protagonist. H. Rider Haggard’s classic hero, Alan Quatermain, returns in three brand new adventures all set on the Dark Continent.  Thomas Kent Miller’s novella has the big-game hunter traveling to Ethiopia to search for the fabled Library of Alexandria.  Erik Franlin pits him against an ancient cult of assassins while Alan J. Porter has the skilled tracker stuck in the middle of the Boer War trying to find the source of a diamond smuggling operation.

“This is a fun series for us,” declares Airship 27 Productions’ Managing Editor, Ron Fortier. “The response to volume one was so overwhelmingly positive. It has already been done as an audio book from Radio Archives and demand for more stories hasn’t stopped since we released that first book.”

Artist Graham Hill provides the cover to this second anthology while Clayton Hinkle, who provided interior illustrations for Vol 1 returns to add another dozen great pieces.  All under the supervision of Art Director Rob Davis.  Fortier adds, “We trusts our readers will welcome this new collection. In regards to this series, believe me, we’re just getting warmed up.”

Now it is time to enjoy three fast paced, original tales that capture the mystery and adventure of a wild, untamed land and the man who loved it above all else.  Journey with him and embrace the magic that was and remains Africa.

WINGS OF THE GOLDEN DRAGON 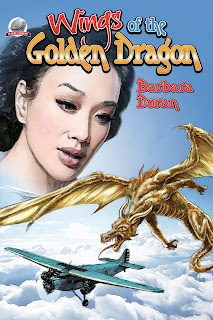 Airship 27 Productions is thrilled to present a brand new fantasy adventure novel that is actually the prequel to Ms Doran’s first book, “Claws of the Golden Dragon.”

“We met Barbara Doran at Pulp Fest a few years ago,” recounts Airship 27 Productions Managing Editor, Ron Fortier.  “She was interested in writing New Pulp and we passed along our Submission Guidelines to her.  A few months later we received the manuscript to ‘Claws of the Golden Dragon,’ a terrific book we were only too happy to publish.”

After the success of that initial book, Doran opted to try something different for her second novel.  “Most of the first book takes place in a fictional city on the West Coast,” Fortier continues. “And is populated by some truly wonderful characters, both real and magical. This time Barbara thought it might be fun to go back in time and explore some of their origins.  Thus the inspiration for her new prequel book.”

1930s Shanghai was a place of excitement and intrigue... and magic. It is an international hotspot where foreign agents from around the world ply their trade. Brought to Shanghai to investigate a powerful new aircraft engine, young Conall McLeod becomes embroiled in a high-stakes game between gangs, spies and immortal beings. Together with his beloved Mudan Chang and hot-shot Chinese pilot, Feng Zhanchi, Conall must navigate the dangerous waters of the city's criminal undercurrents and help free a lost immortal from the clutches of evil.

Writer Barbara Doran spins a fantastic tale of action and mystery filled with some of the most memorable characters ever conceived.  Artist Gary Kato returns to offer up nine interior illustrations and Art Director Rob Davis provides the cover to this fast paced fantasy thriller. Whether deep within the cities maze of dark alleys or high atop an ancient castle of evil, no one will be able to escape from The Wings of the Golden Dragon!

SHERLOCK HOLMES - THE PICTURE OF INNOCENCE 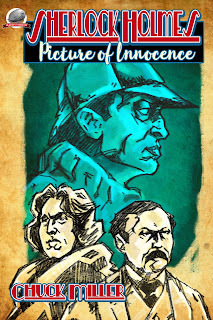 The year 1885 finds Doctor John H. Watson down on his luck. His prospects look bleak until a chance encounter leads him to a meeting with another literary-minded young physician named Arthur Conan Doyle. Together, they hatch a plan for a series of works based on the adventures of Watson’s roommate, the Consulting Detective Mr. Sherlock Holmes.
Then a very attractive young lady, Mary Morstan, arrives at 221 B Baker street seeking help.  Soon Holmes and Watson are drawn into the dark world of the Sholto brothers, a web of blackmail and murder. Even with the assistance of a rising playwright named Oscar Wilde, Holmes finds himself taxed to the limit of his powers when his own darkest secrets are exposed.  What truths lie beneath the surface of the Picture of Innoncence?
“Miller is one of the finest writers in New Pulp,” reports Airship 27 Productions’ Managing Editor, Ron Fortier. “There is originality to his writing unlike anything else out on the market today. And this particular Holmes adventure is no different. Miller puts a fresh spin on familiar characters and his story crackles with fun and mystery.”
Airship 27 Art Director Rob Davis provides the black and white interior illustrations and Mal Earl delivers his own special styling for the cover.  “Picture of Innocence” is a book for all devoted Holmes and Watson fans; young and old alike.
AIRSHIP 27 PRODUCTIONS – PULP FICTION FOR A NEW GENERATION!
Available at Amazon and soon on Kindle.
(https://www.amazon.com/dp/1946183032/ref=sr_1_1?s=books&ie=UTF8&qid=1481122154&sr=1-1&keywords=Sherlock+Holmes+The+Picture+of+Innocence)

Posted by Ron Fortier at 6:54 AM No comments: