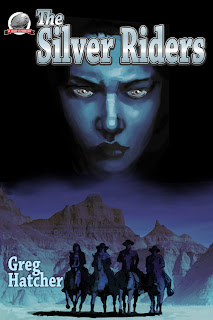 In 1868, six people sought refuge at a hidden enclave in the high desert country of eastern Oregon: A brilliant female doctor dying of a rare disease. A Confederate deserter. Two refugees from a lynch mob. A former slave. A womanizing shootist. These were the first acolytes of Stonegarden Abbey, learning the secrets of Hermetic magic under the tutelage of the mysterious prophet Ezekiel Reardon. But Ezekiel had an agenda of his own, and their time at Stonegarden ended in fire and tragedy.

Those left alive thought the tragedy was behind them. But the dark power they believed was gone and buried with Ezekiel only slept, and it is awakening now, ten years later. The survivors of Stonegarden must return to the ruined Abbey when they are called to rescue one of their own, a woman they had thought long dead. With the help of a teenage half-breed Native girl,  these broken people must reclaim their old skills and find the strength within themselves to save their fallen sister Anne-Marie from an ancient evil… and the fate of the Earth itself might well hang in the balance.

“Weird westerns have become a staple of New Pulp fiction,” says Airship 27 Productions Managing Editor Ron Fortier. “And in The Silver Riders, Greg Hatcher has delivered a masterful thriller filled with both adventure and dark fantasy set against the rugged landscape of the American West.”  Adam Show provides the moody cover and award winning artist Chris Kohler the black and white interior illustrations.  All beautifully laid out by Art Director Rob Davis.

This is Weird Western done the Airship 27 way!

SEE HOW THE WRAITH BEGINS! SANDERSON OF METRO NOW AVAILABLE! 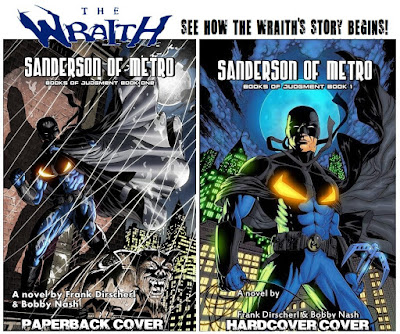 Sky Rangers Bobby Nash and Frank Dirscherl have re-teamed for a new novel called Sanderson of Metro, which is now available for purchase in both paperback and hardcover editions. Published by Trinity Comics. There are links below.

"It was an honor to be invited to play with Frank's characters and to work with Frank again," said Nash of the collaboration. "The last time we were on a project together was Lance Star: Sky Ranger vol. 1 back in 2006. I hope I did Paul Sanderson and The Wraith justice."


Two masters of the superhero pulp fiction world, Frank Dirscherl and Bobby Nash, have come together to tell this tale, the NEVER before told origin of the first Wraith/Paul Sanderson, as only they could.

Witness to the original Sanderson's early childhood, the emptiness in his soul, his yearning for meaning in his life, his finding it in the wilds of Africa and coming face-to-face with the man who would one day become his greatest nemesis. And finally, how he was endowed with the awesome powers of the Eyes of Judgment, becoming the very first Wraith Dread Avenger of the Underworld.

You can learn more about The Wraith here.

Posted by BobbyNash at 9:26 AM No comments: