Well, I think the title says it all. Please check it out: http://csmbooks.com/blog/
Posted by The K.N.O. at 8:07 AM No comments: 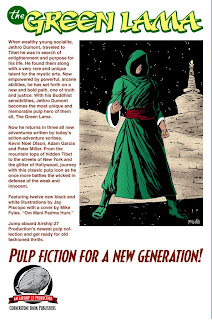 The Green Lama is now available at Amazon.com and other book sellers. Here's the back cover featuring a great pin-up by Jay Piscopo. To check out the Amazon listing, simply click on the title over the page.
Ron
Posted by Ron Fortier at 8:14 AM 3 comments: 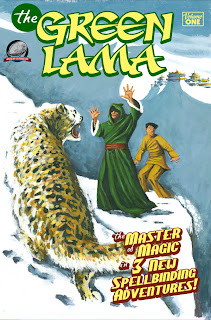 Airship 27 Productions and Cornerstone Book Publishers are thrilled to launch their latest pulp anthology; The Green Lama, Master of the Mystics Arts.

Created by Kendal Foster Crossen back in 1940 for Double Detective Magazine, the character was intended to be competition for Street & Smith’s Shadow title. When wealthy young socialite, Jethro Dumont traveled to Tibet, it was in search of enlightenment and purpose for his life. These he found plus a very rare and unique talent for the mystic arts. Empowered by powerful, arcane abilities, he has set forth on a new and bolder path, one of truth and justice. With his Buddhist sensibilities, Jethro Dumont became the most unique and memorable pulp hero of them all, The Green Lama.

In order to protect his identity, Dumont created a second false persona, that of Buddhist Dr. Pali. Aided by young starlet Jean Farrell and Detective Caraway, the The Green Lama thrilled readers young and old in both his pulp and comic book adventures.

Now he returns in three all new adventures written by today’s action-adventure scribes,

Kevin Noel Olson, Adam Garcia and Peter Miller. From the mountain tops of hidden Tibet to the streets of New York and the glitter of Hollywood, journey with this classic pulp icon as he once more battles the wicked in defense of the weak and innocent.

Last weekend's Pulp Fest was a huge success for all who attended. Including Airship 27 Prod. and some good friends.
Here are Bill Gladman, Mark Maddox, Rob Davis and Ron Fortier enjoying the good times. Kudos to the promoters who made this debut show a truly wonderful time for all!
Posted by Ron Fortier at 7:52 PM 2 comments: