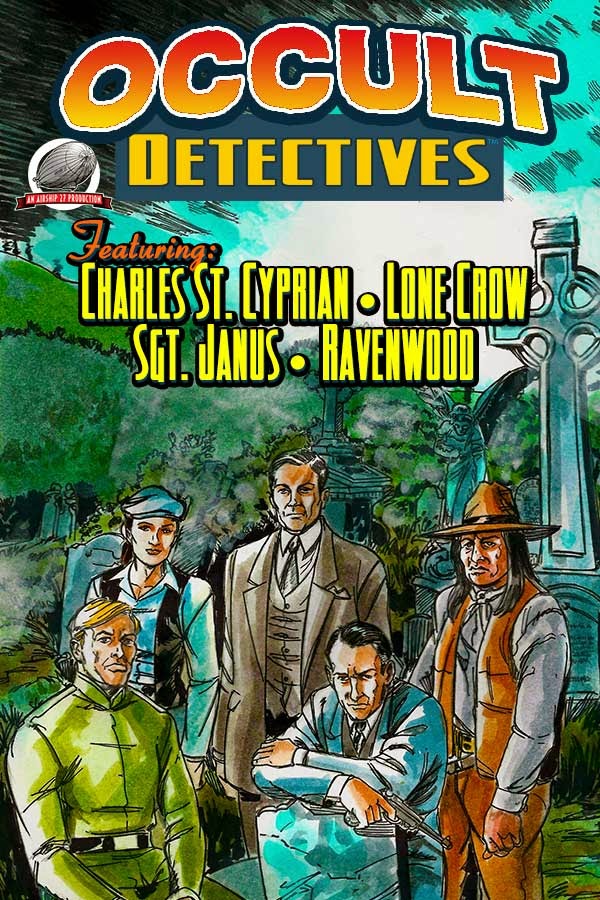 Airship 27 Productions 26th release of the year is the first volume in a brand new pulp series, “Occult Detectives.”

They battle demons and monsters, hunt ghosts and defend us against the things that go bump in the night.  They are Occult Detectives and they’ve been a staple of pulp fiction since the beginning of those glorious, garish magazines.  Now Airship 27 Productions is thrilled to bring you a quartet of tales starring some of the most unique Occult Detectives ever created; three newly minted heroes and one classic master of mysticism.

From the days of the Wild West, Joel Jenkins offers up his Indian Shaman hero, Lone Crow.  Then we have Josh Reynold’s colorful Charles St. Cyprian, the Queen’s own Royal Occultist, followed by Jim Beard’s Sgt. Janus, the Spirit Breaker.  And we culminate with a little known pulp classic figure, Ravenwood; the Stepson of Mystery as chronicled by Ron Fortier.

“The idea for this collection came from Josh Reynolds,” reports Airship 27 Productions Managing Editor, Ron Fortier.  “The idea of bringing together, in one book, some of the most exciting new pulp characters in print today appealed to me immediately; especially if our line up included such popular heroes as Lone Crow, Charles St. Cyprian and Sgt. Janus.  Since their appearance, each of has won over a loyal following of readers.  But that still left us with one empty slot and that became the opportunity I jumped on instantly.”

Seven years ago, Fortier and Airship 27 Productions Art Director Rob Davis, had produced an adult horror graphic novel entitled, “Daughter of Dracula,” that received rave reviews upon its release from Redbud Studio and is still one of that company’s biggest sellers.  Fortier had long wanted to do was write a sequel that would answer some of the questions posed by many of the comic’s readers.  In particular, “What happened to the main character after the events in the story?”  Now, this anthology offered him that stage combined with the added bonus of allowing him to write a character that was one of his favorites.  “Ravenwood – Stepson of Mystery is such a cool, occult detective and I was itching to get my creative mitts on him,” Fortier confesses.  “This is a story I’ve waited a long, long time to tell.”

The book features interior illustrations by Davis and a cover, colored by Jesus Rodriguez, that spotlights all of the heroes together in a setting outside of space and time.

Get ready to take on possessed gunfighters, eerie mesmerizing spirits, a bewitching temptress and a legion of the undead as these four brand new tales usher you into  thrilling adventures beyond the realm of the ordinary; your guides….the Occult Detectives.

The book is now Available at Amazon.com and will soon be out on Kindle.