THE RETURN OF
RAVENWOOD!
Airship 27 Productions & Cornerstone Book Publishers bring back another classic pulp hero from the 1930s in an all new collection of fast paced, macabre adventures of the supernatural.  Meet Ravenwood – Stepson of Mystery!
He is an orphan raised by a Tibetan mystic known only as the Nameless One.  As an Occult Detective he has no equal and is called upon by the authorities when they are challenged by supernatural mysteries.  One of the more obscure pulp characters, Ravenwood – The Stepson of Mystery appeared as a back-up feature in the pages of Secret Agent X magazine.  There were only five Ravenwood  stories ever written, all by his creator, the prolific pulp veteran, Frederick C. Davis.
Now he returns in this brand new series of weird adventures, beginning with this volume in which he combats Sun Koh, a lost prince of Atlantis, battles with monstrous Yetis in Manhattan and deals with murderous ghosts and zombie assassins.  Four of today’s finest pulp storytellers Frank Schildiner, B.C. Bell, Bill Gladman and Bobby Nash offer up a quartet of fast paced, bizarre thrillers that rekindle the excitement and wonder that were the pulps.
With a stunning cover by Bryan Fowler and dramatic interior illustrations by Charles Fetherolf, Ravenwood – Stepson of Mystery was designed by Rob Davis and edited by Ron Fortier.  Once again Airship 27 Productions presents pulp fans with another one-of-kind quality pulp reading experience like no other on the market today.
AIRSHIP 27 PRODUCTIONS – Pulp fiction for a new generation!
ISBN:  1-934935-82-4
ISBN 13:  978-1-934935-82-8
Produced by Airship 27
Published by Cornerstone Book Publishers
Release date: 31 Dec. 2010
Retail Price: $24.95
Discounted at our on-line shop. (http://www.gopulp.info/)
Posted by Ron Fortier at 1:45 PM 1 comment:

Bobby interviewed by All Pulp

Check out an all new interview with Bobby Nash at All Pulp.
http://allpulp.blogspot.com/2010/12/yet-another-one-of-spectacled-seven.html
Bobby talks about pulp, his novels, comic books, upcoming projects, and convention travel. It’s sure to be a fun interview.
Posted by BobbyNash at 4:55 PM No comments: 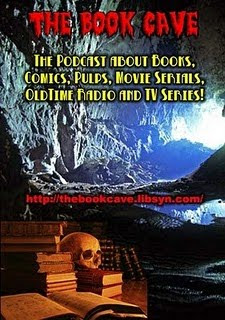 Check out Bobby's first visit to The Book Cave podcast as he and host Ric Croxtin talk about Bobby's novel, Evil Ways, plus a few other surprises.
http://thebookcave.libsyn.com/
Official Release:
THIS WEEK ON THE BOOK CAVE!! The Book Cave Episode 103: Bobby Nash's Evil Ways Bobby Nash joins Ric to talk about his Evil Ways. Art is out this week doing experiments on his neighbors. ;-) After the show Tommy Hancock gives us all the Pulp news with All Pulp
Check out ALL PULP'S official podcast, THE BOOK CAVE here-http://thebookcave.libsyn.com/
Posted by BobbyNash at 10:38 PM No comments: