Bobby
Posted by BobbyNash at 4:08 PM No comments: 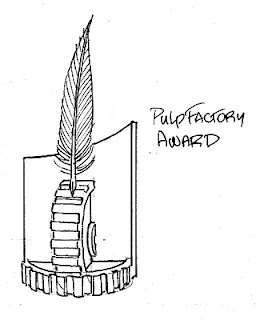 During the month of January, the fifty-two members of the Yahoo Pulp Factory group posted nominations for best new pulp fiction and artwork in four categories. The nominations were tallied and from them, those receiving the most nods were placed on the official ballot listed below. Members of the Pulp Factory have until midnight,
March 31st to vote. Winners will be announced and awards presented at this year’s
Windy City Pulp & Paper convention in Chicago.

The Pulp Factory is an informal group made up of both professional writers and artists and dedicated fans of the pulp genre. These awards were created to help recognize and promote new work, both fiction and art, in this classic American literary field. Ron Fortier is the group’s moderator. The Pulp Factory is not affiliated with any single publishing organization and many of its members have contributed to dozens of well known pulp markets.

“For too long the pulp community has only focused on rewarding old time creators,” Fortier said. “Yet in recent years we’ve seen a huge resurgence in new material by some of the brightest writers and artists working today. But no one was acknowledging their contributions and we thought it was time to remedy that omission.” The group hopes the awards will spur new interest in the genre and inspire other creators to enter the pulp world.


FOR THE RECORD
(For all four categories combined, a total of fifty-one nominees were offered. These nominated artists and writers represented eleven different publishing houses.)
Posted by Ron Fortier at 9:21 AM 3 comments: