Big thanks to the Barrow News-Journal, my hometown newspaper for writing an article on the recent New Pulp Fiction Award win for myself and my novella, Snow Falls. The article will appear in this week's physical newspaper, which goes on sale tomorrow, but they also have it on the website. Unfortunately, I believe you have to subscribe to access the site.

You can find it HERE and below. 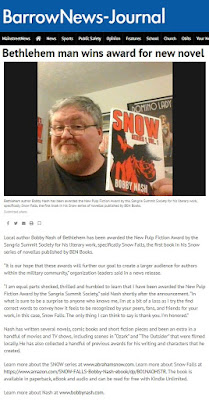 Posted by BobbyNash at 2:46 PM No comments: 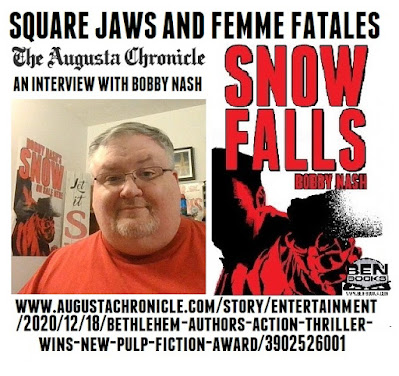 Big thanks to The Augusta Chronicle. They picked up the article on me and my books that the Athens Banner-Herald posted and ran it as well. Please check it out HERE.

In a modest office in Bethlehem, Ga., a small Barrow County town just 25 miles west of Athens, countless scenes of suspense, action, mayhem and mystery have sprung from the keyboard of author Bobby Nash.

Earlier this month, Nash won the $500 New Pulp Fiction award for “Snow Falls,” the first book in a series of novellas he published through his own publishing imprint, Ben Books.

Thanks again to the Athens Banner-Herald and The Augusta Chronicle for their coverage. Also, a big thanks to The Sangria Summit Society for honoring me with the New Pulp Fiction Award for 2020.

Learn more about SNOW FALLS below.
Read more »
Posted by BobbyNash at 3:41 PM No comments: 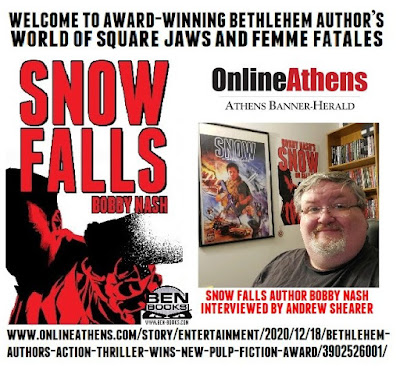 Big thanks to Andrew Shearer of the Athens Banner-Herald for writing such a cool article about me and my books. I love it. We had a fun Zoom chat and talked about writing, the New Pulp Fiction Award, books, comics, Snow, Domino Lady, conventions, and more. Coincidentally, we discovered that we both lived in Doraville, GA around the same time as kids and we both at our first con at the same time, The Atlanta Fantasy Fair. Small world, eh?

You can read the article called 'Welcome to award-winning Bethlehem author’s world of square jaws and femme fatales' HERE.

Posted by BobbyNash at 1:15 PM No comments:

BOBBY NASH TAKEOVER - IF YOU MISSED IT LIVE... 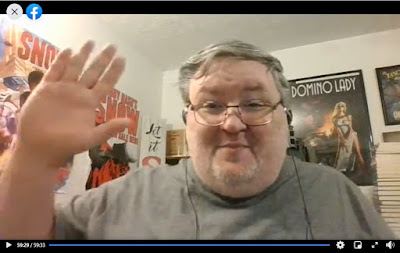 Huge thanks to Charles F. Millhouse for inviting me to take over his Author Charles F. Millhouse Presents...' Facebook Group today from noon - 1 pm EST. I had an amazing time discussing Snow, In The Wind audio, Evil Ways, Deadly Games!, Pulp Reality, Lance Star: Sky Ranger, Domino Lady, The Ruby Files, and more. Thanks to all who came out to watch, ask questions, or just say hello. That was fun.

He has other amazing creators taking over throughout the day so please stop by and give it a look.

If you missed it LIVE, you can watch the video HERE, on Youtube, or below.
Thanks again, Charles.
Bobby 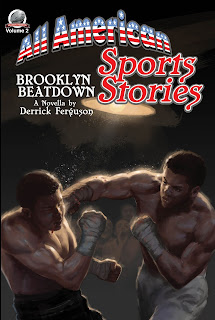 Airship 27 is excited to present three new pulp tales that shine a light on American sports.

Each displays the inherent drama and personal sacrifices required when any man or woman pits their strength of will to accomplish their goals.

“Next to religion, nothing contributes more to the American way of life than sport.”

BASEBALL IN DECEMBER – Dexter Fabi – A young rookie player is mentored by an old pro and together they experiences the longest record season in the game’s history.

THE KICKER – Ron Fortier – Returning Vietnam veteran Lucas Brown must over come a tragic disability to recapture his dreams of gridiron glory.

Here are three dramatic stories detailing the excitement, thrills, beauty and drama that is American Sports as told by today’s New Pulp scribes. Artist Adam Shaw provides the powerful cover and Art Director Rob Davis the twelve interior illustrations. The clock is ticking, the game is on the line and only the best will triumph.

Posted by Ron Fortier at 6:17 AM No comments: 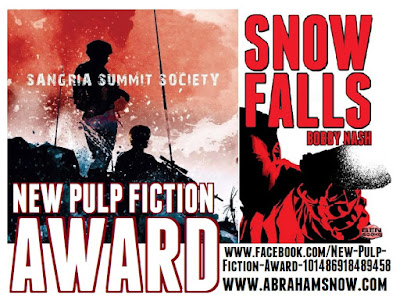 I am equal parts shocked, thrilled, and humbled to learn that I have been awarded the New Pulp Fiction Award by the Sangria Summit Society for my novella SNOW FALLS. In what is sure to be a surprise to anyone who knows me, I'm at a bit of a loss for words. I have written and rewritten this post several times as I try the correct words to convey how it feels to be recognized by your peers, fans, and friends for your work. I am happy to hear that readers are enjoying my work, in this case, SNOW FALLS in particular. The only thing I can think to say is THANK YOU. I'm honored.

The Sangria Summit Society will offer an annual New Pulp Fiction award with a cash value of $500. Our committee will consider pulp fiction books published in English, in this century, by a sole author. The author must be living at the time of the award. The awards will be paid using PayPal. They are taxable. It is our hope that these awards will further our goal to create a larger audience for authors within the military community.

BLOOD IS THE NEW BLACK 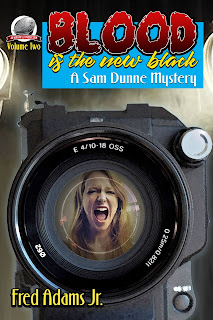 SAM DUNNE IS BACK

Musician Sam Dunne takes on a gig composing a musical score for a cheap, direct to cable slasher film called “Lake Deadly.” Much of the film is shot on location around a nearby lake and Dunne soon learns all is not as it seems among the cast and crew. Petty jealousies and hidden animosities threaten to derail the shooting.

What he doesn’t imagine is the murder of a young woman on camera. Someone purposely switched out the fake dagger with a real one and the girl’s throat is slashed in front of dozen of witnesses. All of it caught on camera.

Once again, Dunne finds himself caught up in a gruesome murder with more than enough suspects to satisfy any weary detective. Only this isn’t make believe and as he attempts to solve the mystery, he is well aware the unknown killer may strike again. All are suspects and possible victims at the same time.

“Writing teachers always tell their students, write what you know,” says Airship 27 Production Managing Editor Ron Fortier. “Though, I personally don’t always agree with that rule, in writer Fred Adams Jr.’s case it bears mentioning.” A retired college teacher who taught fiction writing for many years, Adams also moonlighted as a musician playing with several rock and roll bands. “Fred brings authenticity to Sam Dunne’s world,” Fortier continues. “He’s lived it and it breathes on every single page of this new mystery. We think our readers are going appreciate that, especially those with a fondness for all kinds of music.”

Posted by Ron Fortier at 6:36 AM No comments: