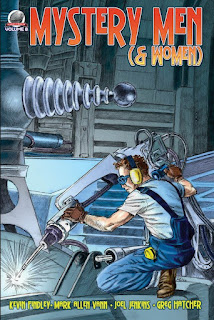 Kevin Findley offers up the rousing adventures of a movie stuntman turned masked avenger named Quirt. Veteran scribe Joel Jenkins gives us another Eel and Adder and adventure and Mark Allen Vann introduces his mob nemesis, Killdevil. The entire package wraps up with a brand new Dr. Fixit by the late Greg Hatcher.

Airship 27 Production Art Director enhances the volume with is beautiful black and white illustrations and provided the cover featuring Dr. Fixit. “This one was special to us,” reports Airship 27 Managing Editor Ron Davis. “Greg Hatcher submitted his third Dr. Fixit tale to us shortly before being admitted to the hospital. His passing came as a shock to all of in the New Pulp community and will miss him greatly. Look for a solo Dr. Fixit title coming later this year which will highlight Greg’s last story featuring this unique character.”

Available from Amazon in paperback and soon on Kindle.

Posted by Ron Fortier at 7:02 AM No comments: 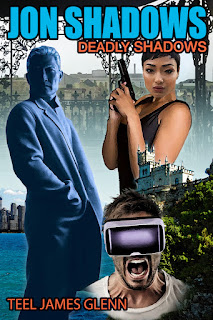 Jon Shadows, son of a fabled adventurer and mysterious female ninja assassin, courts danger wherever he goes. In this volume he takes on two new challenges, both of which could prove the final chapter of his daring exploits.

First, while visiting the alluring Flora Temple in New Orleans, a random act of violence leads them into a tangle of murder, robbery and more. Next he is contacted by the widow of a former Marine buddy who suspects her husband death was orchestrated by a billionaire genius sequestered on Wolf Island, a bizarre medieval fortress built on a remote island.

Available from Amazon in Paperback and soon on Kindle.

Posted by Ron Fortier at 7:42 AM No comments: