Check out an interview with me at http://susanwhitfield.blogspot.com/2010/03/bobby-nash-shares-diversity-in-writing.html.

There's even a quote from the ol' Air Chief in there.

Bobby
Posted by BobbyNash at 10:21 PM No comments: 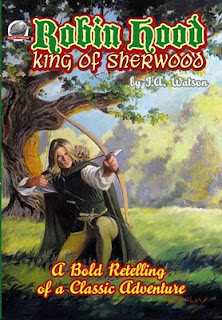 In 1190, two years after resting the crown from his father, Henry II, Richard the Lionhearted departed France for the Holy Lands and the Third Crusade. He left behind regents, Hugh, Bishop of Durham and his chancellor, William de Longchamp. But his younger brother, Prince John, lusted after the crown and saw Richard’s absence as a golden opportunity to seize control. John began a program of heavy taxation that threatened to destroy the social-economic stability of the England.

While the royals conspired against each other, it was the people of the land who suffered. Working under inhumane laws, they became no more than indentured slaves to the landed gentry. Amidst this age of turmoil and pain, there arose a man with the courage to challenge the aristocracy and fight for the weak and helpless. He was an outlaw named Robin of Loxley and how he became the champion of the people is a time worn legend that has entertained readers young and old.

Now, I.A. Watson brings his own vivid imagination to the saga, setting it against the backdrop of history but maintaining the iconic elements that have endeared the tale of Robin Hood throughout the ages. It is a fresh and rousing retelling of an old legend, imbuing it with a modern sensibility readers will applaud. The book features a stunning painted cover by professional artist, Mike Manley and black and white interior illustrations by the book’s designer, Rob Davis. 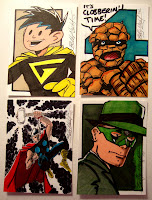 Make It So! The Comics 4 Cure edition.
http://makeitsomarketing.tripod.com/popularcultureblog/index.blog/2001239/comics-for-cures-sketch-cards-by-bobby-nash/
Bobby
Posted by BobbyNash at 8:33 AM No comments:

Sale on all Cornerstone Books!

Cornerstone Books is having a sale.

35% off all Cornerstone print books (including all of the Airship 27 titles including Lance Star: Sky Ranger vol. 1 & 2) until 3/28/10.
http://www.cornerstonepublishers.com/books/?page_id=22

Cornerstone’s entire stock of print books are 35% off the regular retail prices until Sunday March 28th. Now is the time to stock up on all the books you have had on your wish list.

To get your discount, select the book(s) you want to order and hit the “Add to Cart” button. Then enter the code “springsale” (without quotes) in the Customer Code box of the shopping cart and hit the submit button. Your discount should show up.

If you live outside the US (or have any problems), send us an e-mail at info@cornerstonepublishers.com and we can make the sale prices available to you.

Bobby
Posted by BobbyNash at 6:56 PM No comments: 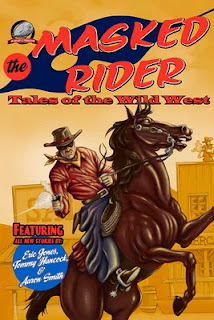 SADDLE UP FOR ADVENTURE

Airship 27 Productions & Cornerstone Book Publishers are saddling up to bring their readers three rip-roaring yarns of gun-blazing justice from out of the Old West. One of the hallmark genres of the early pulps were the many western titles available to readers. Heroes like the Masked Rider and many others rode the plains month after month in wild and wooly six-gun tales.

In the years immediately following the Civil War, the land west of the great Mississippi River was a lawless frontier being shaped by the courageous men and women who ventured there in hopes of finding a better life. What they found was a vast wilderness exploited by outlaws, drifters and cattle barons who made their own law at the end of a gun. Caught in the middle were the brave and noble Native American people, struggling to survive against this tide of so-called civilization.

A rare breed of men took on the challenge of bringing justice the west; men like the mysterious Masked Rider, Virgil Earp and Wild Bill Hickok. These were men who cast their long shadows over western history and went on to become legends. Now writers Eric Jones, Tommy Hancock and Aaron Smith bring us their adventures in three fast paced, no-holds barred shoot’em ups wherein it’s good versus evil on the dusty streets and rolling plains of this big country.

The Masked Rider and his blood-brother, Blue Hawk, must stop a gang of outlaws from taking over an entire town in The Raid on Granite Gap, while Virgil Earp walks a gauntlet of blood to rescue his kidnapped wife in Crossing Contention, and finally Wild Bill tries to stop two men of honor from destroying each other in The Long Trail of Vengeance. This title features a cover by Rob Davis and Shane Evans with interior illustrations by Nick Miller.

So load your six shooters, pilgrims and saddle up for western action Airship 27 style; Pulp Fiction for a New Generation!

Thought you folks would like to see how the PFA sculptor was developing. It is almost finished, though more detailing is required before a mold will be made to cast the four awards. It really is looking great and our nominees now know what it is they are vying for. Votes continue to come in from Pulp Factory members and results will be announced at the start of April. Again, the awards being handed out at this year's Windy City Pulp & Paper show.
Posted by Ron Fortier at 11:55 AM No comments: 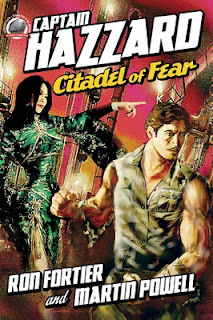 Airship 27 Productions & Cornerstone Book Publishers are thrilled to announce the release of the new revised edition of CAPTAIN HAZZARD – CITADEL OF FEAR by Ron Fortier & Martin Powell. Published over four years ago, when pulp scribe Fortier first began this new series of Captain Hazzard adventures, the book became an instant success as the first new Hazzard story in over 68 years!! Since then the original publisher’s dwindling inventory stock and a few on-line books sellers have been the only places fans could find this much sought-after title. Even then they were forced to pay inflated prices.

“I don’t appreciate people who take advantage of pulp fans,” Fortier said recently when asked about the exorbitant prices listed for the title at Amazon. “Which is why I’m so thrilled we have it available again.” Aside from being available at the normal book outlets, CAPTAIN HAZZARD – CITADEL OF FEAR can be purchased at the Airship 27 on-line store (http://www.gopulp.info/) where all their titles are 25% off retail.

Both Fortier and Powell began their writing careers in the world of comics, each earning acclaim for their handling of classic pulp characters, Powell for Sherlock Holmes and Fortier for the Green Hornet. Over the past decade they have simultaneously turned to writing pulp fiction and are considered two of the finest amongst the new generation of pulp scribes. CAPTAIN HAZZARD – CITADEL OF FEAR is their one and only collaboration.

When the world’s leading scientists begin disappearing without a trace, Captain Hazzard and his team find themselves on the trail of a criminal mastermind known only as the Green Dragon. Battling an army of mind-controlled zombies, their adventure leads them to a fantastic hidden fortress of wonder and terror and a final confrontation with the forces of evil. Horror and thrills await them at every turn, all culminating within… THE CITADLE OF FEAR!