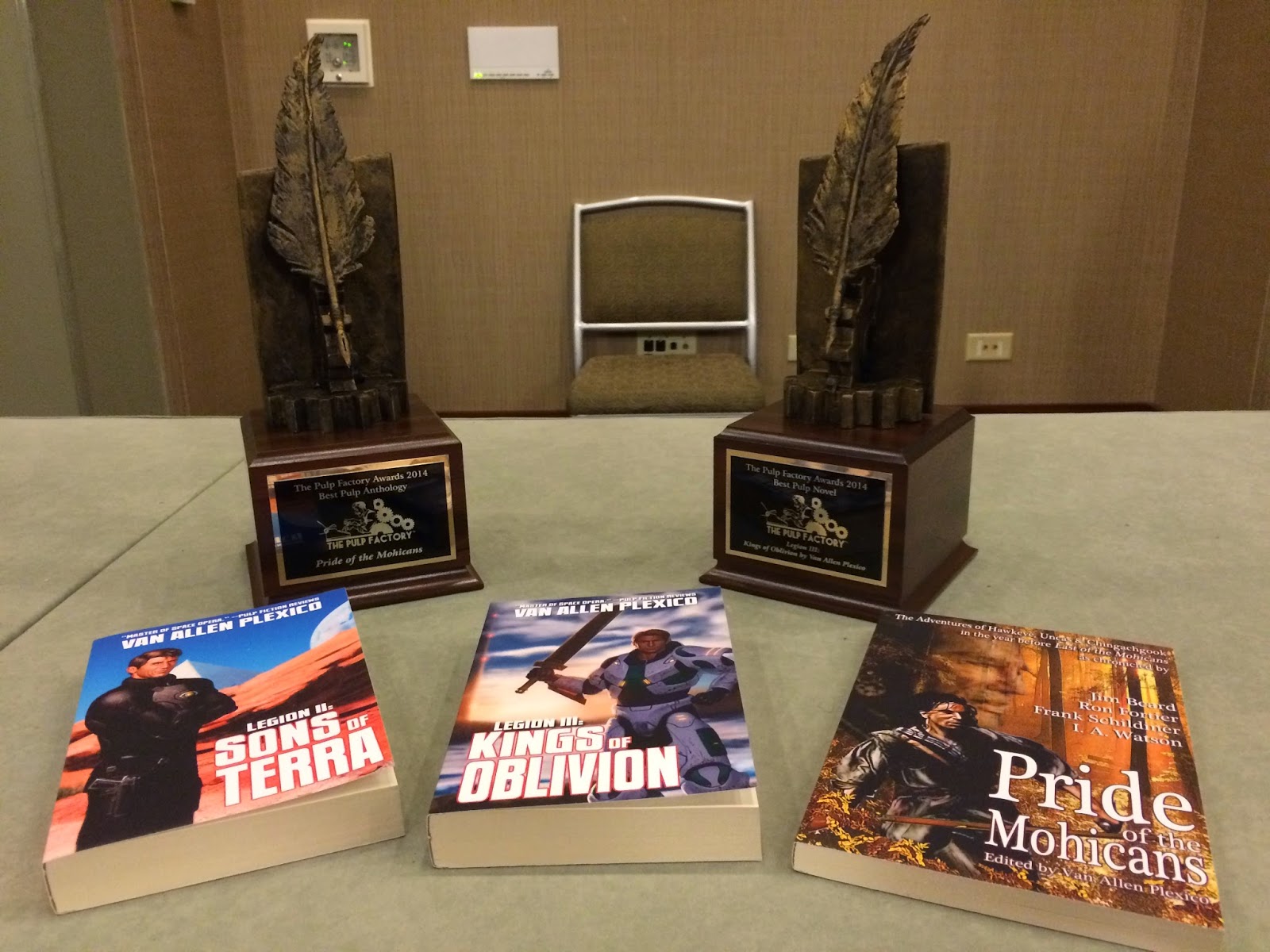 The Best Pulp Short Story went to Ian Watson for his “The Fort of Skulls” which appeared in “Pride of the Mohicans” from White Rocket Books.

For the very first time, the Best Pulp Anthology/Collection award went to White Rocket Books for “Pride of Mohicans.”

The Best Pulp Cover went to Mark Williams for his painted cover to “Legion II : Sons of Terra” from White Rockets.

Best Interior Illustrations went to Fabio Listrani for his illustrations in “Zombies Vs. Robots: No Man’s Land” from IDW.

Our congratulations to all the winners and especially to White Rocket Books for their near sweep.  The awards themselves reflected nominations from twenty-four new pulp publishers.
Posted by Ron Fortier at 9:24 AM No comments: 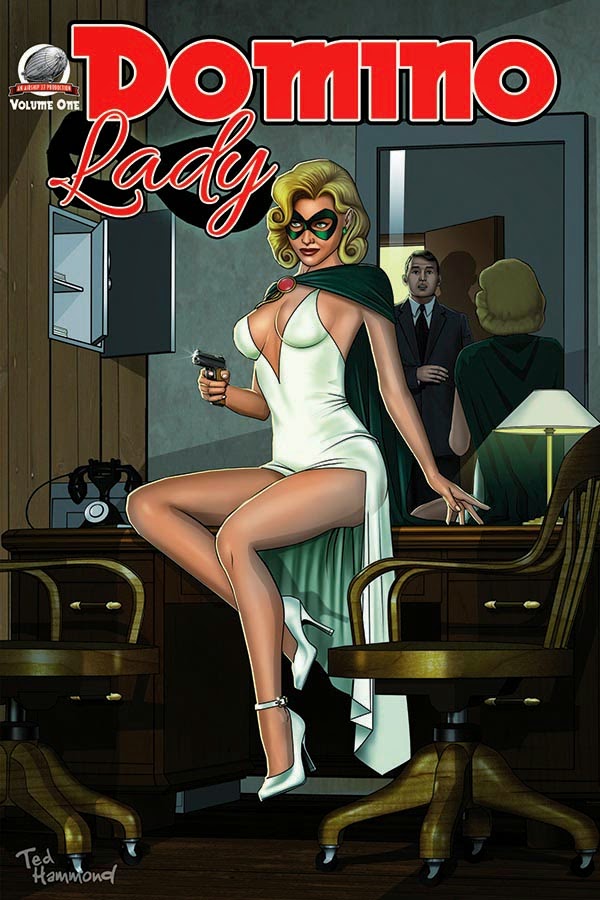 Airship 27 Productions is excited to announce the release of their first ever Domino Lady anthology.  “The question I’m always asked is, when are you going to do a Domino Lady book?” says Managing Editor Ron Fortier.  “Truth is, we had one half done several years ago but through a series of bizarre setbacks, it ended up being finished and released by another publisher.  Getting a new Domino Lady book done under our own imprint has a personal goal of mine ever since.”

The Domino Lady first appeared in the pulps in 1936.  After graduating from the Berkeley College in California, Ellen Patrick goes off to Europe on a joy filled jaunt.  Her trip is cut short when her widowed father, D.A. Owen Patrick is murdered by gangsters.  Upon her return home she learns the corrupt authorities have no intention of finding her father’s killers. Thus she puts on a domino mask and a backless white dress to avenge him.  Though arming herself with a small .22 automatic and a syringe full of knockout serum, the Domino Lady’s most effective weapon was her sensual beauty, which often distracted her opponents until she could turn the tables on them.

“Of course you can’t do a Domino Lady book without recruiting the best artists available,” Fortier continues.  “And that’s exactly what we did.”  Well known comic pro, James Lyle, provides twelve gorgeous black and interior illustrations and graphic artist Ted Hammond, known for his amazing pin-up work, produced the stunning cover that graces the cover.  All of which was then perfectly assembled by Art Director Rob Davis to create a truly beautiful package no real pulp lover should do without.

Posted by Ron Fortier at 7:45 AM No comments:

DAY OF THE DESTROYERS 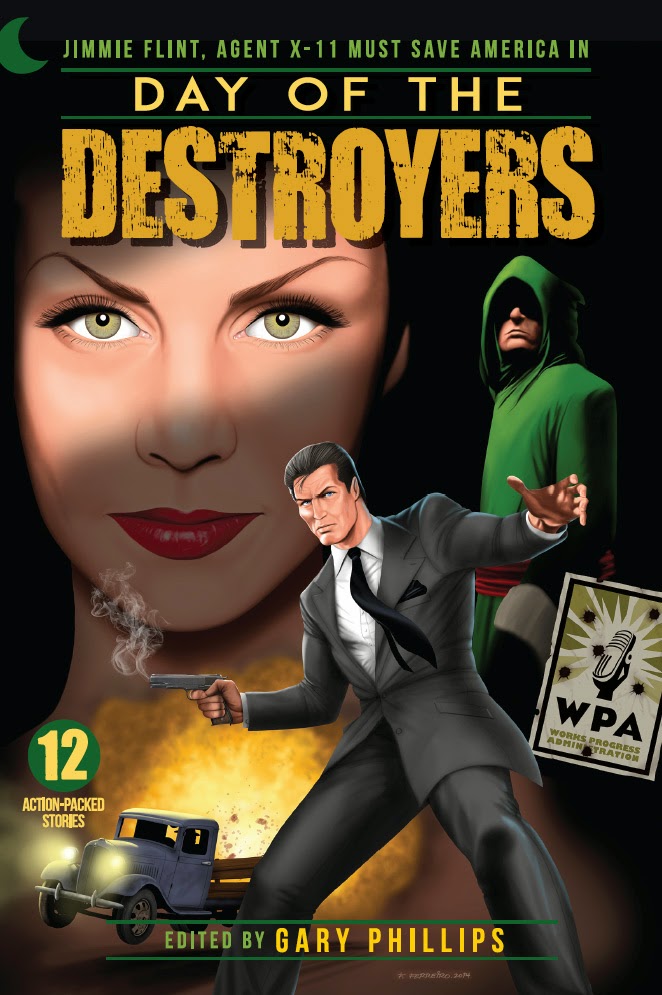 DAY OF THE DESTROYERS
Secret Agent X-11 Jimmie Flint Battles
to Save FDR and the Nation
From the epoch of the Great Depression when the pulps were in full bloom, among the millionaire playboys who donned masked avenger garb, there were the super spies from Secret Agent X to those in Thrilling Spy Stories.

It is with great pleasure then that Moonstone Books presents Day of the Destroyers, an all-original prose linked anthology. Each story is part of a larger arc wherein Jimmie Flint, Secret Agent X-11 of the Intelligence Service Command battles to prevent the seditionist Medusa Council from engineering a bloody coup overthrowing our democracy.

Inspired by actual events from the 1930s, alluded to in the recent Roosevelts: An Intimate History PBS documentary, a grouping of extremist politicians and moneyed interests sought to "take back" the country from President Roosevelt. Day of the Destroyers pits the ever-resourceful Jimmie Flint against these forces.

He fights across the country preventing an aerial assault on Chicago’s rail lines, destroying a secret factory of gas meant to enthrall millions in New Mexico, to racing to stop a machine of fantastic destruction in Manhattan.  He’s aided by his girlfriend, intrepid newspaper reporter Kara Eastland, his teenaged protégé Tim Fallon, as well as pulp era masked vigilantes the Green Lama, the Phantom Detective, and the Black Bat.  Joining the fight are real historical figures including General Smedley (the original Devil Dog) Butler and war correspondent Martha Gellhorn.  Each exciting chapter-story in the anthology builds to a final showdown between the redoubtable X-11 and his arch-nemesis, Colonel Lucian Starliss, head of the Medusa Council.