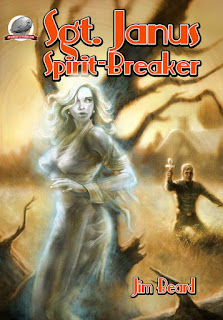 Situated in the rural back country of Edwardian England is an old, mysterious house whose unique owner earns his living as a Spirit-Breaker, a hunter of ghosts.  A former military veteran, Sgt.Roman Janus has devoted his life to aid those haunted, both emotionally and physically by obsessive wraiths whose spirits are still anchored to our world.

Sgt.Janus – Spirit Breaker is the creation of new pulp writer Jim Beard.  Part detective, part occultist, Janus is himself a man of mystery whose own past is shrouded and the motivations behind his calling kept hidden.  Within this volume you will find eight tales as narrated by his clients, each with his or her own perspective on this uncanny hero and his amazing career. Filled with suspense, terror and agonizing pathos, each a solid mesmerizing journey into the unknown world beyond.

Featuring a cover by artist Jeff Herndon and eight stunning illustrations by Eric Johns, with design work by Pulp Factory Award winning Art Director, Rob Davis and edited by Managing Editor Ron Fortier, Sgt.Janus – Spirit Breaker is the first in a new series by one of today’s leading stars in New Pulp Fiction.

“…Beard’s fiction is anything but pat and routine. While he may deliberately conjure the spirits of authors of Victorian and Edwardian occult fiction before him, Beard’s prose is fresh and entirely modern in his, at times, frank and unsettling tales of the wages of his characters’ past sins. Each story breezes by and like the best tales told round the campfire, it leaves the reader hungry for more.”   William Patrick Maynard (The Terror of Fu Manchu & The Destiny of Fu Manchu.)

Posted by Ron Fortier at 2:14 PM No comments:

You can meet Pulp Factory Authors Bobby Nash, Van Allen Plexico, and Sean Taylor at the Alabama Phoenix Festival - May 25 - 27 in Birmingham, AL.

You can get all the details at www.alabamaphoenixfestival.com

This is a great chance for you to meet these creators and get your copies of Lance Star: Sky Ranger (vol. 2 and 3), Blackthorn: Thunder on Mars, and The Ruby Files editions signed by multiple contributors  in one fell swoop. Plus, it's always fun when Bobby, Sean, and Van are on panels together.

If you’re in the area, please stop by and say hi.

Posted by BobbyNash at 12:17 PM No comments:

CAN THE WRAITH SURVIVE THE CRY OF THE WEREWOLF? 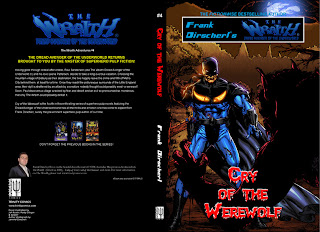 New Pulp author and Trinity Comics publisher, Frank Dirscherl shared the following information about the upcoming novel, The Wraith: Cry of the Werewolf with The Pulp Factory.

My latest novel (a look at the cover is attached), the fourth in The Wraith Adventures series, CRY OF THE WEREWOLF, will be released for sale on May 18 from my own Trinity Comics. You'll be able to buy (initially) direct from my online store, as well as from Amazon, Barnes & Noble and all other online and bricks and mortar stores shortly thereafter. EBook release will coincide with the print release.

Below is the book's rear cover blurb:

Having gone through ordeal after ordeal, Paul Sanderson (aka The Wraith Dread Avenger of the Underworld ®) and his love Leena Patterson, decide to take a long overdue vacation. Choosing the mountain village of Bidbury as their destination, the two happily leave the crime and filth of Metro City far behind them, at least for a time. Once they reach the picturesque surrounds of the Little England area, their idyll is shattered by an attack by a creature nobody thought could possibly exist—a werewolf. Soon, Paul discovers a village wracked by fear and deceit, and an evil so pronounced, so monstrous, that only The Wraith could possibly defeat it.

CRY OF THE WEREWOLF is the fourth in this enthralling series of pulp novels featuring the Dread Avenger of the Underworld, and has all the thrills and emotion that one has come to expect from Dirscherl, surely the pre-eminent superhero pulp author of our time.

Thank you, and I hope everyone who chooses to buy this enjoys it. I put a LOT into this book, and I hope you all give it a chance and thoroughly enjoy it. Thank you again :)

Email ThisBlogThis!Share to TwitterShare to FacebookShare to Pinterest
Labels: Cry of the Werewolf, Dread Avenger of the Underworld, Frank Dirscherl, New Pulp, Pulp, The Pulp Factory, The Wraith, Trinity Comics

EVERY STORY A GEM! A RICK RUBY REVIEW

The A Bit Too Old For Comics Blog reviews The Ruby Files. You can read the full review at http://toooldforcomics.blogspot.com/2012/04/ruby-files-volume-one.html but we’re happy to report that he likes it.

Want to know more about The Ruby Files? Check out the official Rick Ruby site at http://rickruby.blogspot.com

Posted by BobbyNash at 9:57 AM No comments: