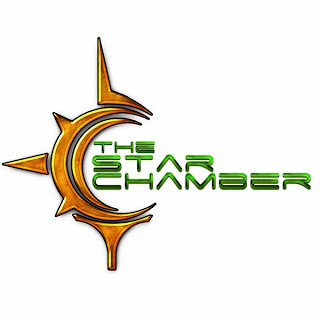 On Wednesday, December 11th at 9 pm EST, the Star Chamber Show episode #3 will feature The Pulp Factory's Bobby Nash! An award-winning writer of novels, graphic novels, comics, short stories, and more, Bobby is also co-host of the Earth Station One podcast and is frequently a TV and Movie actor and extra, including shows such as Fox's The Following.

Posted by BobbyNash at 10:43 PM No comments: 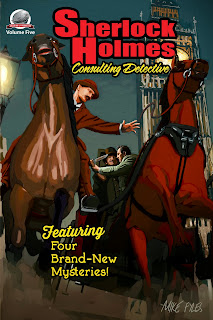 Airship 27 Productions is thrilled to announce the release of its seventeenth title of the year, SHERLOCK HOLMES – CONSULTING DETECTIVE Vol V.  All four previous volumes have been among the company’s biggest sellers as the appeal of Arthur Conan Doyle’s characters only grows stronger with time.

“Part of this series success is that we made it clear from the start that we would remain true to Doyle’s original template,” explains Airship 27 Managing Editor, Ron Fortier.  “Over the years these characters had been put into such fanciful situations as combating Martians, meeting Tarzan or battling monsters as Dracula or Dr. Jekyll & Mr.Hyde. It seemed there was no end to the absurdity of these so-called crossovers.”  Fortier was adamant that the Consulting Detective books would respect Conan Doyle’s original tales in every way possible.  “This is the one series our readers look forward to every year and are always inquiring when the next book is due.  We value their support and promise to maintain this classic approach.  We’re not about to fix what isn’t broken.”

Amidst the fog covered alleys and byways of London, murder and mayhem run rampant.  With the dawning of a new century, Consulting Detective Sherlock Holmes and his able assistant, Dr. Watson represent the forces of truth and justice, ready to confront the villainy of these new modern horrors.

Here are another quartet of unique, perplexing cases that will challenge this noble duo and test their fortitude and courage.  Why would someone murder an old man a few months before his hundredth birthday?  Why is Holmes arch nemesis, Prof. Moriarty hunting the city for same sadistic killer he is after?  And when the Great Detective is arrested and imprisoned for attempting to seduce the wife of a wealthy nobleman, Watson questions whether his friend has finally lost his mind.

Within these pages, writers Chuck Miller, Aaron Smith, I.A. Watson and Andrew Salmon offer up four of the most thrilling and suspenseful adventures ever devised to confound Arthur Conan Doyle’s most beloved heroes.  Pulp Factory Award winning artist Mike Fyles provides the dramatic cover with interior illustrations and design by fellow PFA winner, Rob Davis.  It is time to load your revolver, hail a hansom cab and prepare for action for once again, the game is afoot!

Posted by Ron Fortier at 2:26 PM No comments: