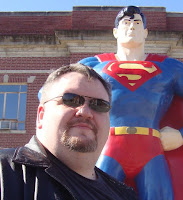 New Pulp Author Bobby Nash was recently interviewed by Jessica Lay for her Jess Resides Here blog. They discuss everything from Bobby’s latest work, the art of making covers, and what types of books he likes to read.
You can read the full interview at http://frellathon.com/2012/03/31/author-bobby-nash-interview-2/
Posted by BobbyNash at 8:56 AM No comments:

Author Bobby Nash joins Art Sippo and Ric Croxton in the latest episode of The Book Cave podcast to talk his latest novel, Deadly Games. This episode we are trying something new. At the end of the interview we will do a spoiler alert so that everyone who has not read the book will know that everything from then on will be spoilers. If you have read the book and have questions about certain parts, like Ric did, you will now have the answers. If you have not read the book, please stop the podcast when we give out the spoiler alert.
This is a book that you will want to reread after hearing the spoiler section. 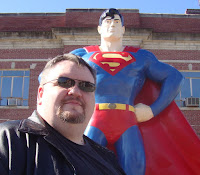 About Deadly Games!:
They played the most dangerous game of all and death was only the beginning...

Six years ago, Police Detective John Bartlett and journalist Benjamin West were instrumental in the capture of notorious master criminal Darrin Morehouse. Their story played out in the media, rocketing both Bartlett and West into local celebrity status.

Today, Morehouse, still a master game player and manipulator, commits suicide while in prison. His death initiates one final game of survival for the people Morehouse felt wronged him the most. At that top of the list are Bartlett and West, who must set aside their differences to save the lives of Morehouse's other victims and solve one last game before a dead man’s hired killers catch them and his other enemies.

A MAN OUT OF TIME
Airship 27 Productions is proud to release its fifth book of the year; CALL OF SHADOWS, by well known fantasy adventure writer David C. Smith.  Although known for its novel and anthologies starring classic and new pulp heroes from the 30s, Airship 27 Productions has occasionally ventured beyond that era umbrella.
“Every now and then, a project comes along that totally appeals to us as modern pulp,” Managing Editor Ron Fortier explained.  “This was such a book.  Written with all the sophistication and sensibilities of a 21st Century narrative yet capturing some of the same magic and sense of wonder the classic pulps were famous for.  We’re very excited about this title.”
Restaurant owner Steve Beaudine is killed in a car accident and his beautiful wife, Ava is severely injured.  After months of physical recuperation, she returns to AVA’S with the desire to keep the business going.  But Tony Jasco, her husband’s partner, has plans to sell the eatery and split the profits. Ava adamantly refuses to terminate what had been Steve’s dream.  She is determined to make it work no matter Jasco’s opposition.
Then the mysterious David Ehlert enters her life with a fantastic story, one straight out of a fairy tale.  He claims to be a wizard and that Jasco is trying to have her killed to gain his own ends.  Ava simply can’t believe such a fanciful claim…until they are attacked by magical dark forces.  Suddenly she finds herself the target of a twisted, dark magician and her only salvation is Ehlert, a man claiming to have been born in 1886 but still looking young and fit.
Writer David C. Smith spins a colorful, fast paced thriller that introduces a fascinating new hero in the vein of the classic golden age pulps but with a decidedly modern day twist.  It is the story of a haunted man out of time seeking redemption for past sins in a world of arcane mysteries and magiks.  CALL TO SHADOWS is a masterful thriller by a veteran writer that will keep you on the edge of your chair from start to finish.
The book features a cover painted by Bryan Fowler and designed by Art Director Rob Davis with nine interior illustrations by artist Mark Saxton.  Look for it at Amazon, Airship 27 Productions’ website and soon from www.IndyPlanet.com.
AIRSHIP 27 PRODUCTIONS – Pulp Fiction For A New Generation !
Available now at Amazon’s Create Space
(https://www.createspace.com/3829099)
$3 PDF version available at Airship 27 Hangar Site
(http://robmdavis.com/Airship27Hangar/airship27hangar.html)
And soon at the POD store, Indy Planet.
(http://indyplanet.com/store/)
Posted by Ron Fortier at 9:46 PM No comments:

ALL PULP DELVES INTO THE RUBY FILES

In March, Airship 27 launched its 45th title (the 4th of 2012) about a 1930’s pulp detective named Rick Ruby. All Pulp sat down with co-creators/writers Bobby Nash and Sean Taylor, writers Andrew Salmon and William Patrick Maynard, and editor/publisher Ron Fortier to delve into The Ruby Files.

You can read the All Pulp Round Robin Interview in its entirety at http://allpulp.blogspot.com/2012/03/all-pulps-round-robin-interview-ruby.html

Please visit the official site for The Ruby Files at http://rickruby.blogspot.com/.
Posted by BobbyNash at 3:19 PM No comments:

GANGSTERS & GUNMOLLS
Airship 27 Productions dons its tough-guy mantle, as it premiers its newest pulp star in THE RUBY FILES.
It was the 1930s and America was locked in the grip of the Great Depression.  Gangsters controlled the major cities while outlaws roamed the rural back country.  It was a time of Speak Easy gin-joints, Tommy-guns, fast cars and even faster dames.  This is the world of New York based Private Investigator Rick Ruby, a world he is all too familiar with.  From the back alleys of Gotham to the gold laden boulevards of Hollywood, Ruby is the shamus with a nose for trouble and an insatiable appetite for justice.  So if you’ve got a taste for hot lead and knuckle sandwiches, tug your cuffs, adjust your fedora and light up a Lucky, a brand new pulp detective is coming your way.
Created by pulp masters, Bobby Nash & Sean Taylor, Rick Ruby echoes the tales of Sam Spade and Philip Marlowe while offering up his own brand of two-fisted action.  Joined by fellow pulp smiths Andrew Salmon & William Patrick Maynard, these modern scribes of purple prose present a quartet of tales to delight any true lover of private eye fiction. This instant classic features a gorgeous Mark Wheatley cover and eight evocative black and white illustrations by Rob Moran.
This is a book that harkens back to the classic black and white Warner Brothers gangster movies that featured James Cagney, Humphrey Bogart and Edward G. Robinson to name a few.  The atmosphere is gritty with a no-nonsense hero pulp fans are going to applaud from the first story to the last.  And when that last tale comes to a close, you can bet we haven’t seen the last of Rick Ruby, Private.
AIRHSIP 27 PRODUCTIONS – PULP FICTION FOR A NEW GENERATION!
$3 digital copy available here –
(http://robmdavis.com/Airship27Hangar/airship27hangar.html)
From Create Space here -
(https://www.createspace.com/3810386)
POD version from Indy Planet
(http://www.indyplanet.com/store/product_info.php?products_id=6797)
Posted by Ron Fortier at 6:14 PM No comments:

For more information on Bobby Nash, visit http://www.bobbynash.com/
Posted by BobbyNash at 9:18 AM No comments:

The Lance Star: Sky Ranger Pulp Anthology Volume 4 flies into production.
Check out the cover sketch by artist Felipe Echevarria at http://www.lance-star.com/.
It's a beauty.

The cover image depicts a scene from my story for this volume, "Ring of Fire."
I'm excited to see the final painted version.

Please check it out at www.lance-star.com and let us know what you think.

Bobby
Posted by BobbyNash at 12:40 PM No comments:

THE ROBIN HOOD OF THE PULPS
Airship 27 Productions is very excited to announce the release of its latest pulp anthology featuring a classic hero from the past; the Moon Man.
Detective Sgt. Stephen Thatcher is the son of Police Chief Peter Thatcher. Sickened by the effects of the Great Depression on Great City, the young lawman cannot reconcile the rich society elite living the good life while across town the poor of Great City go hungry.  Unable to correct this injustice through the system he represents, Thatcher assumes the role of the vigilante thief the Moon Man by disguising himself behind a one-way Argus glass globe.  In this get up he then proceed to rob the rich and give to the needy via his loyal aide, former boxer Ned “Angel” Dargan.  He is also aided by the lovely Sue McEwen, the daughter of the man sworn to capture him, his own boss, Lt. Detective Gil McEwen.
Created by pulp legend Frederick C. Davis, the Moon Man’s exploits appeared in the pages of “Ten Detective Aces” and were all reader favorites.  “It really is amazing how many old pulp fans still recall this character with so much fondness,” commented Airship 27 Managing Editor, Ron Fortier.  “He was so unique and outlandish, fighting villains and avoiding the police all the while wearing that fish bowl on his head.”
Now he returns to the streets of Great City in five new thrilling adventures written by writers Ken Janssens, Gary Lovisi, Erwin K.Roberts and Andrew Salmon.  Pulpdom’s most bizarre hero is back on the case with a cover by Rob Davis & Rich Woodall and twelve interior illustrations by Ralph Van Der Hoeven.
“This is just kind of book we started Airship 27 Productions for,” added Fortier.  “To shine a spotlight on these classic pulp heroes and showcase them to a new audience.  For many, this will be their first introduction to the Moon Man.  Hopefully while enjoying these new tales, they will be intrigued enough to go find reprints of the originals.”
Airship 27 Productions – Pulp Fiction For A New Generation!
Available from Amazon  -Click on Title Above
(https://www.createspace.com/3809640)
$3 digital download at the Airship Hangar 27
(http://robmdavis.com/Airship27Hangar/airship27hangar.html)
And soon from (http://indyplanet.com/store/)
Posted by Ron Fortier at 5:05 PM No comments: