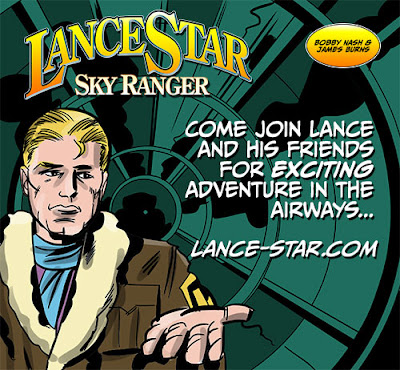 Posted by BobbyNash at 5:39 PM No comments:

After announcing the news, Airship 27 publisher, Ron Fortier said, “Mark's gorgeous cover on volume one has deservedly been nominated for the Pulp Factory Award for Best Pulp Cover of 2012.  So you can image how thrilled and honored we are at having him on board for this new book. He's one of the most admired artist in the field today.”

Ruby Files co-creator, Sean Taylor also commented, “When I heard Mark Wheatley was back on board for another cover, I couldn't believe it,” Taylor said. “I mean, let's be honest, the stories may have really driven the book home for the first collection but what really, really attracted readers to the book in the first place was Mark's cover. We couldn't ask for better. Period.”

And Ruby Files co-creator, Bobby Nash added, “I’m thrilled to have Mark return to The Ruby Files. The cover to vol. 1 is great and really helped push the sales of the book. It’s a beautiful piece of art.”

Keep watching http://rickruby.blogspot.com for more The Ruby Files vol. 2 news as soon as it becomes available.

Posted by BobbyNash at 12:48 PM No comments: 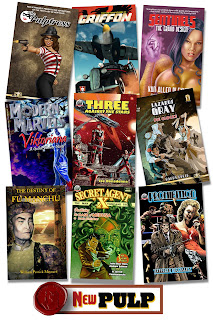 For the first time since its inception, the Windy City Pulp & Paper Convention will be devoting a five hour block to the ever popular New Pulp Movement in what they have labeled New Pulp Sunday.

"Given the number of New Pulp creators and publishers that attend our convention, we felt devoting a day of programming to the energetic world of New Pulp was natural and would be fun for attendees.  Hopefully it will introduce some folks to the wide variety of material being published today under the New Pulp banner."  Doug Ellis, co-founder and promoter of the Windy City Paper & Pulp Convention.

To that end Ellis reached to out to several of his New Pulp contacts, amongst them Ron Fortier, Managing Editor of Airship 27 Productions and Tommy Hancock, Managing Editor of Pro Se Productions.  With a list of their colleagues planning on attending this year’s convention, Fortier and Hancock put together a program schedule that would include three panels and eight authors’ readings.  Joining them in these events are noted New Pulp Creators Chris Bell, Rob Davis, Joe Bonadonna, David C. Smith, Wayne Reinagel, William Patrick Maynard, David White and Terrence McCauley.

For the past four years the Windy City Convention has hosted the Pulp Factory Awards, given out by one of several New Pulp groups that celebrate the best in new pulp fiction and artwork.  “The creation of New Pulp Sunday is a logical expansion of the con’s support for all things pulp related,” said Fortier.  “We are thrilled at this recognition of New Pulp and promise all attendees a five hour block of truly wonderful readings and panels that clearly demonstrate the continued evolution of pulp fiction from the old to the new.”

Hancock added, “Everyone involved in the New Pulp Movement knows where the roots of what we do lie, exactly in the fiction that the Windy City Pulp And Paper Convention has helped preserve and promote since its inception.   It’s an honor for those of us who feel like we’re walking in the shadows of giants to be welcomed into the Convention program in such a way.  It’s also an opportunity to let fans of Pulp of all kinds know that the sort of stories they enjoy in the classic Pulps are still being written today.”

Posted by Ron Fortier at 5:33 PM No comments: 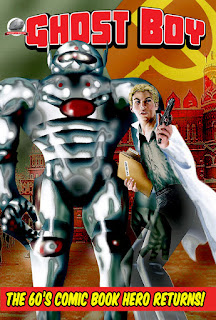 Airship 27 Productions announces the release of their second title for 2013, GHOST BOY.

The during the 1960s America was locked in a tense Cold War with the Soviet Union, Ian Fleming’s James Bond unleashed a spy craze and the Beatles swept across American shores with their version of new pop-rock and roll.  Meanwhile American comics had entered into the Silver Age with the birth of Marvel Comics.  Every week new titles seem to proliferate drug store magazine racks.

Writers Terry Alexander, Micah Harris and Andrew Salmon recapture the fun and magic of this 60s forgotten character and offer up four brand new adventures. As an extra bonus, Ron Fortier and artist Gary Kato recreate the origin tale of GHOST BOY in a special 9 pg strip which kicks off this thrilling collection all gathered under a gorgeous cover by Laura Givens.

“Actually he never left,” explains Airship 27 Productions’ Managing Editor Ron Fortier with a mischievous grin in his eyes.  “That’s because there never was such a title and this particular project is in reality our homage to those wonky Silver Age comics we all grew up loving.”  Fortier goes on to explain the idea came about when the company looked into adapting an authentic 60s comic series only to discover the property was still under license.  “That’s when we collectively had this idea do make-up our own comic hero from that decade and see if could recapture the odd-ball exuberant charm those books contained.  Will let our readers judge if we’ve succeeded or not.”

Within another week on Amazon proper and Kindle.
And within two weeks at (www.IndyPlanet.com)

Posted by Ron Fortier at 2:12 PM No comments: 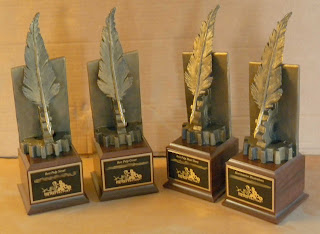 Please vote for only one in each of the four categories by putting a X in the appropriate circle.  Once completed, send directly to me at (Airship27@comcast.net)  You have until the end of March to vote and turn in your ballot.

These 12 companies were represented in the nominations.