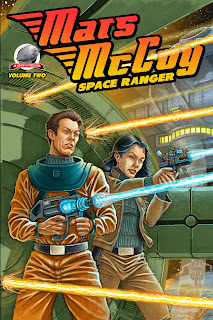 MARS McCOY TO THE RESCUE

When the universe is imperiled, the call goes out to the brave men, women and robots of the Space Rangers; a group of highly skilled pilot/warriors dedicated to the preservation of law and order throughout the known worlds.  Headquartered in the hidden free-floating asteroid station known as the Black Hole, the Space Rangers are ready to respond to any threat traveling the space lanes in their ultra-fast and powerful Black Bird patrol ships.

In this second volume, Captain Mars McCoy, and his gorgeous co-pilot, android Lt. Betty-12 of Black Bird 5 confront two unique and malevolent threats.  In “The Curse of the Star Lance,” by James Palmer, they discover a lost Imperial Space Cruiser and the hidden horror that still dwells within it.

Next up is Van Allen Plexico novella length adventure, “Mars McCoy and the Chaos Horde.”   A mysterious army of monsters begins materializing at random throughout the Fringe worlds wreaking chaos in their path.  What is their secret origin and how can Mars & Betty-12 put an end to their lethal rampage?