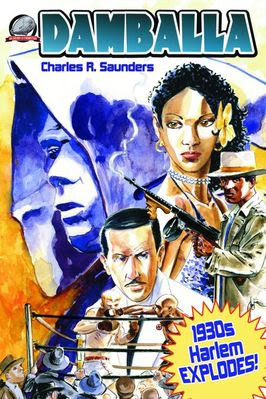 DAMBALLA
Making Pulp History!
From the heart of Africa to the streets of Harlem, a new hero is born sworn to support and protect Americans of all races and creeds; he is Damballa and he strikes from the shadows.  When the reigning black heavy weight boxing champion of the world agrees to defend his crown against a German fighter representing Hitler’s Nazis regime, the ring becomes the stage for a greater political contest.  The Nazis’ agenda is to humble the American champion and prove the superiority of their pure-blood Aryan heritage.  To achieve this end, they employ an unscrupulous scientist capable of transforming their warrior into a superhuman killing machine.
Can the mysterious Damballa unravel their insidious plot before it is too late to save a brave and noble man?  Airship 27 Productions and Cornerstone Book Publishers are proud to introduce pulpdom’s first ever 1930s African-American pulp hero as created by the acclaimed author, Charles Saunders.
“Racism and sexism were a few of the ugly aspects of the pulps we’d all like to forget,” Editor Ron Fortier comments.  “Minority groups based on race, sex and religion were ostracized and either ignored completely or denigrated in their outlandish portrayals.  Since its creation, Airship 27 Productions has made it a goal to address these wrongs and help correct them within the context of providing top-notch action fiction to our readers.  DAMBALLA is a major step in that direction and we are truly excited about its release.”
Praise for DAMBALLA and writer Charles Saunders has already begun.  “Having revolutionized the genre of epic fantasy with the creation of Imaro, a black warrior easily equal to such classic characters as Tarzan and Conan, Charles Saunders has done it again.  This time he has created DAMBALLA, a true hero in every sense of the word. Battling racism and evil in the 1930’s, DAMBALLA is no pale imitation of The Shadow or The Avenger.  In fact, after reading this excellent book, I think that they would be proud to consider him a brother in the ceaseless war against crime and injustice.”   Derrick Ferguson – “Dillon and the Voice of Odin”
DAMBALLA by Charles Saunders features a cover by Charles Fetherolf and interior illustrations by Clayton Hinkle, with book design by award-winning artist Rob Davis.
Airship 27 Productions – Pulp Fiction for a New Generation!
ISBN:  1-613420-12-9
ISBN 13:  978-1-613420-12-6
Produced by Airship 27
Published by Cornerstone Book Publishers
Release date: 06/17/2011
Retail Price: $24.95
On-Line Shop (http://www.gopulp.info/)
$3 Digital copy (http://homepage.mac.com/robmdavis/Airship27Hangar/index.html)
Posted by Ron Fortier at 7:10 AM