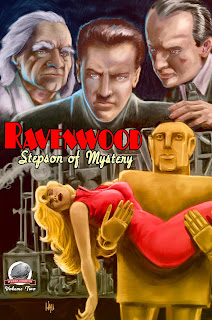 Airships 27 Productions is thrilled to announce the release of their latest title, RAVENWOOD – STEPSON OF MYSTERY Vol II.

Easily one of the most obscure classic pulp heroes of the 1930s was Ravenwood - Stepson of Mystery.  In all he appeared in only five stories, these as back up tales in issues of Secret Agent X.  Several years ago Airship 27 Productions released its first volume in this series bringing back this unique occult detective, whose different colored eyes are always changing.  The stories also feature his Tibetan teacher/mentor, the Nameless One, and his loyal British butler, Stirling.

Now get ready for another quartet of brand new tales of suspense and action as the Stepson of Mystery once again sets out to solve bizarre mysteries the police are helpless to unravel.  Follow along as he confronts an amazing killer robot, teams up with the Black Bat to fight an alien horror and investigates ritualistic murders that have no rhyme or reason.  New pulp writers Janet Harriett, Aaron Smith, Jonathan Fisher and Gene Moyers pull out all the stops, delivering four original, fast paced adventures that skirt the outer edges of fear and madness.

This is one pulp book best read with the lights on!

“One of our primary goals in starting Airship 27 Productions was to continue the adventures of little know pulp heroes,” explains Managing Editor Ron Fortier. “With this volume, we’ve done just that.  As there were only five classic Ravenwood stories, we’ve now increased that number and fans now have thirteen tales to read and enjoy.  We’re very, very proud of this achievement and hope to keep that number growing in the future.”

This second volume in the RAVENWOOD – STEPSON OF MYSTERY series, features a cover produced by Rob Davis (pencil composition) and Shannon Hall (digital colors) with twelve stark interior illustrations by Eric York.  “If you’ve never read a Ravenwood adventure before,” Fortier continues, “this is a good place to jump on board.”  He also added that there is a full length RAVENWOOD – STEPSON OF MYSTERY novel now in the works and should be available soon.

Available Now at Amazon.com & on Kindle!