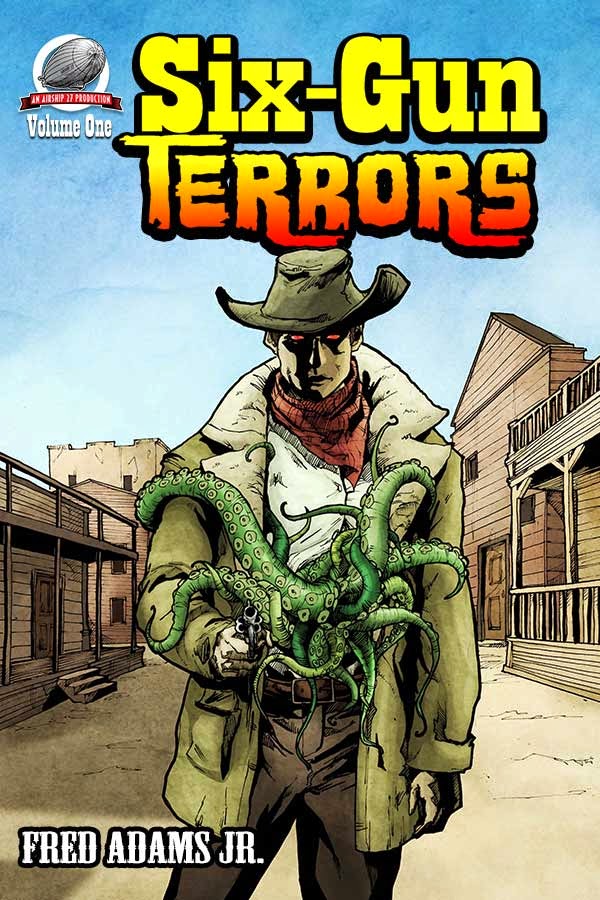 Airship 27 Productions is thrilled to presents its first ever weird western pulp title, SIX-GUN TERRORS by one of the brightest new voices in pulp fiction today; Fred Adams, Jr.

Former Union scouts and saddle tramps Durken and McAfee are more than satisfied with their lives as cattle-punchers for Homer Eldridge and his Triple Six ranch.  When a mysterious, black clad preacher arrives in town leading a congregation of dwarfish foreigners, strange things begin to happen.  First cattle from various spreads are found savagely butchered out on the range for no apparent reason.  Then several Triple Six hands go missing.

McAfee begins to suspects there is something very sinister about the new reverend and his people.  Something that will bring more horror and destruction with it.

SIX-GUN TERRORS features not one, but two Durken and McAfee adventures; the longer “Six-Guns and Old Ones,” described above and the shorter “The Angel,” wherein our cowboys confront the ghost of a Confederate sniper they killed in the Siege of Atlanta.  Both are masterpieces of the macabre.

Writer Fred Adams, Jr. spins two weird western tales that will have readers on their edge of their seats and jumping at shadows.  Mixing a heady brew that is half H.P. Lovecraft and half Louis L’Amour, SIX-GUN TERRORS is a creepy reading experience not soon forgotten.

“Fred Adams is an amazing writer,” says Airship 27 Productions Managing Editor, Ron Fortier.  “We recently released his first novel, HITWOLF, a few months ago to rave critical reviews and now we bring you this eerie western project that is in a class by itself.  It is rare that we release two books by the same writer in one year, but Adams is truly a unique talent and deserves this attention.  We are very excited to be showcasing his works.”

The book is amply illustrated by another rising star in the New Pulp field, artist Zachary Brunner.  His previous work for Airship 27 Productions includes “George Chance – The Green Ghost,” “Sgt. Janus Returns” and “The Apocalypse Sucks.”  A filmmaker amongst other skills, Brunner’s art is evocative of many of the old classic pulp magazine illustrators.  Together he and Fred Adams, Jr. make an unbeatable creative force in world of New Pulp Fiction.