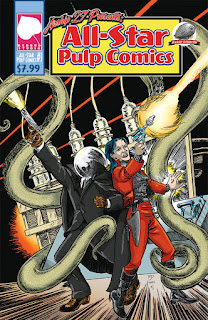 Airship 27 Productions in conjunction with Redbud Studios is thrilled to announce the release of  ALL STAR PULP COMICS # 3.   “We’re thrilled to offer up another great collection,” says Airship 27 Managing Editor Ron Fortier, “comic strip adventures of classic pulp heroes. The contents in this third volume is really eclectic representing a wide variety of pulp genres by some of the finest writers and artists in the graphic world.”
The eight featured stories include :

“Sinbad and the Isle of Stone”
Scott “Doc” Vaughn

The book has a cover by Rob Davis with colors by Warren Montgomery and features the Moon Man battling side-by-side by Lt. Betty 12 from the Mars McCoy Space Ranger pulp series.  The book is now available from Create Space –