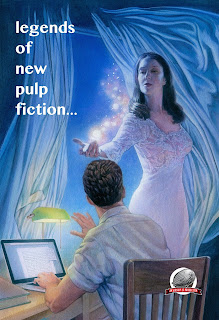 Earlier in the year we learned that New Pulp writer/editor/publisher Tommy Hancock was suffering from congestive heart-failure.  A relatively young family man, this was a dangerous condition that threatened not only Tommy but his entire family.  Almost immediately after this news was made public, several members of the New Pulp community began putting their heads together to see if anything could be done to help the Hancocks.

“Jaime Ramos proposed the idea of doing a benefit anthology,” says Airship 27 Productions Managing Editor, Ron Fortier.  “It was such a great idea, I realized it needed to get done and we began planning such a project.” The first thing Fortier did was bring aboard his partner in Airship 27, Art Director Rob Davis. “There was no way this was going to fly without Rob handling the book’s overall artwork and design.”  Fortier then went to Hancock and informed him of their plans. With Hancock’s blessings, he then posted an ad on Facebook explaining the project and seeking submissions from both writers and artists.  “It was always our intention to do this as a traditional pulp tome and thus artwork would be a major element in the final product.”

Much to Fortier’s surprise, and delight, the first creator to volunteer his assistance was Douglas Klauba, one of the finest artists in the field.  Klauba volunteered to paint the anthology’s cover once the book was assembled.  “Honestly,” Fortier confesses, “I was in shock. Doug is an amazing artist and his offering to do the cover was very much an omen that we were about to put together something truly unique.”

Within 48 hours after posting his recruiting ad, Fortier had received 57 commitments by New Pulp writers while 36 artists in the field signed on to do the illustrations.  Amongst these creators were some of the most popular New Pulp writers and artists in the field. In fact, getting so many promised stories in just two days, Fortier begrudgingly realized he and his associates were being handed a giant book and he publicly closed the admission call.  “It was crazy,” he recalls.  “Fifty-seven stories in just two days!  Of course there were naysayers who warned me we’d never get all of them.  They were right, we got 62 instead.”

And so the project began with Fortier reading each entry and then assigning it to an artist to illustrate.  Each tale features one black and white illustration.  Ramos acted as his assistant editor proofing teach story after Fortier with them.  Then, months into the project, Ramos, who suffers from diabetes, found his own health in jeopardy and after having handled half the stories, was forced to sideline himself.  What looked to be a major set-back was averted with writer/editor Todd Jones, a protégé of Fortier’s, volunteered to take on the task of finishing the proofing.

And so, after months of ups and downs. Airship 27 Productions is extremely proudly to present LEGENDS OF NEW PULP FICTION.  A giant treasure chest of some of the finest New Pulp fiction ever produced in an 830 page collection.  Representing the varied genres of pulp tradition, this volume features tales of horror, mystery, horror, suspense, pirates, fantasy, private eyes, crime-busting avengers and westerns to name a few.
“Rob and I kidded during the long months of production that we had everything pulp save for a romance story,” quips Fortier.  “Then in the final days of story submissions, we were sent a romance.  No lie!”

Available now from Amazon and on Kindle.