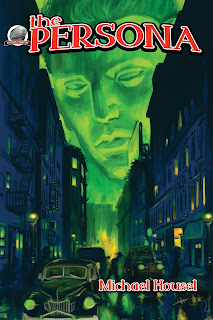 Airship 27 Productions is thrilled to be introducing to the world of pulp fiction a brand new mystic hero in The Persona created by writer Michael Housel.

It is 1938 in Brick Town, NJ, and a mayoral campaign is underway.  What the citizens are unaware of is that their little hamlet has become the target of a demonic cult known as the Ministry of Chaotic Command and they are sponsoring a candidate who is in actuality a demonic being.

But before the servants of evil can unleash their horror, Brick Town’s leading businessman, Michael Mansford, is spirited away to a mystical realm that exist between life and death.  There he is recruited as agent of the Light by a supernatural being calling himself Mr. Surrogate.  Surrogate bestows upon Mansford a magical golden mask. Upon donning this grim false-face, Mansford is transformed into a powerful mystic who will become known as the Persona.

His task, to expose Hell’s secret invasion and defeat the Demon Monster that threatens all he loves and holds dear.  But can he succeed?  To do so he will have to sublimate his own identity and become this new and relentless warrior; THE PERSONA.

This is the first in a planned series starring this great new pulp hero, so be sure to hop on the bandwagon with this fast paced origin story.