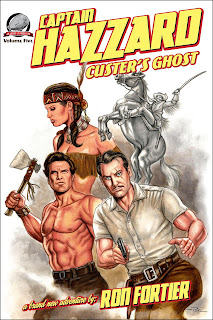 When an eerie ghost rider appears on the Fort Peck Indian Reservation and begins butchering innocent lives, native superstitions are fueled.  Could this wraith actually be General George Armstrong Custer returned from the dead to seek retribution for his massacre at the Battle of Little Bighorn?  Then, when gangsters attempt to kidnap a Sioux Princess at a prestigious college in New York, Captain Hazzard and his team of adventurers soon find themselves flying to Montana to unravel a truly bizarre mystery.

Accompanying them is Jim Anthony, the famous Super Detective, along with his grandfather, the Comanche shaman, Mephito.  Somewhere in those rugged mountains and plains lies a secret from the past that will change Anthony’s life forever.  But to uncover it, he and the Hazzard will have to risk all and solve the mystery of Custer’s Ghost!

Fortier, the author, and Airship 27 Productions’ Managing Editor, had long wanted to bring both these great heroes together.  “It’s no secret to pulp fans that both were originally invented to copy the legendary Doc Savage,” Fortier related during a recent interview.  “Whereas Jim Anthony went on to have multiple adventures, Captain Hazzard only ever appeared in one issue of his own title and then vanished.  Throughout the years he’s been known as the One Hit Wonder.”

Since beginning Airship 27 Productions, over a decade ago, Fortier and partner, Art Director Rob Davis, have devoted themselves to continuing the adventures of lesser known pulp heroes such as Captain Hazzard and Jim Anthony. To date the company has released four books featuring the Super Detective in anthologies, while Fortier took it upon himself to write the new exploits of the Champion of Justice.

“Custer’s Ghost” has been three years in the making and the author is all too aware that readers have been overly patient awaiting its completion.  The book features interiors by Davis and a stunning cover by Pat Carbajal.  “In the end I hope they will think the wait was worth it,” Fortier says hopefully.  “Just don’t ask me when number six is coming?”

Available now from Amazon and soon on Kindle.