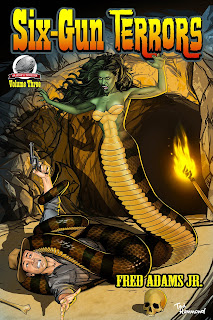 When a plague of rattle snakes descends on parts of the frontier, striking terror in the hearts of local farmers and ranchers. General Sherman, representing the federal government, once again seeks out the services of his two most reliable scouts, cow-punchers Durken and McFee. Content with their current occupation working for cattle baron Homer Eldridge, the ex-Union scouts are reluctant to answer the General’s summons. Such past missions have led them straight into encounters for the supernatural in truly horrific ways.

This new assignment is no different, as the two must lead a cavalry company into the heart of Indian Territory seemingly infested with poisonous reptiles. Their primary goal: discover the reason for this plague and whether it is merely nature gone wild or something a great deal more sinister.

“This is one of the most original weird western series on the market today,” says Airship 27 Productions Managing Editor Ron Fortier.  “The bizarre adventures of Durken and McFee are really creepy good fun, giving us a nice dose of traditional western melodrama with the proper infusion of blood curdling horror.”

Author Fred Adams Jr. once again blends authentic western action with gut-wrenching horror as he weaves a twisted, nightmarish tale of slithering terror that will keep readers up late at night.  Artist Art Cooper provides the interior illustrations with Ted Hammond the beautiful horrific cover in the classic pulp vein.  This is another great chapter in a weird western series quickly becoming a fan favorite.