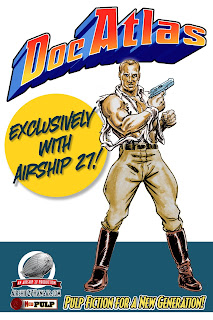 One of the most popular new pulp heroes to arrive on the scene in the past decade is Doc Atlas; created by veteran writers Michael A. Black and Ray Lovato.  Created as their homage to the classic 30s and 40s characters such as Doc Savage, Jim Anthony etc. etc. Atlas has appeared in many fast paced adventures along with his aides, Thomas “Mad Dog” Deagan and Edward “Ace” Assante. These first appearances were offered via such outfits as Eclipse Publishing and Crossroads Press. Hundreds of pulp readers quickly became enthusiastic fans and continue clamor for more stories featuring this dynamic trio. Now they are about to have their wishes realized as Black and Lovato have entered into partnership with one of the leading New Pulp publishers in the field, Airship 27 Productions.

Airship 27 Productions has been publishing New Pulp anthologies and novels since 2004 and in that time their books have won numerous awards.  Owned and operated by Ron Fortier, Managing Editor, and Rob Davis, Art Director, the company is one of a small group that pioneered the revival of pulp fiction and continues to set the standard in creative, original pulp fiction.

“Ever since meeting Mike Black, I’ve been an ardent fan of his work,” Fortier says. “There’s no pulp genre he hasn’t worked in and his stories are always top notch. Doc Atlas is by far his most popular creation.” Black, over the past few years, has become a regular contributor to the Airship 27 anthologies and eventually convinced Lovato to submit his own works. When the pair offered Fortier a new Doc Atlas short, it sparked an idea he realized was too good to pass up. “Doc Atlas and Airship 27 were made for each other. It seemed only natural to me that our company could provide a home that would allow Mike and Ray the freedom to focus solely on their tales and leave the publishing end to someone else; someone who very much wants to increase their readership in a big – big way.”

Echoing that enthusiasm, Michael Black offered the following.  “My lifelong friend, Ray Lovato, and I are honored to have Doc Atlas become a regular part of Airship 27’s cast of characters. We’ve both admired the work of Ron Fortier and Rob Davis for years, and are eager to join them in creating new pulp adventures for a new generation of readers.”

Beginning in 2018, Airship 27 Productions will produce one Doc Atlas title per year, whether a collection of shorts or full length novels and be their sole publisher. Further announcements will be forthcoming.