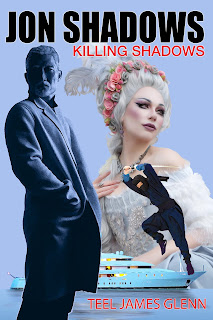 Airship 27 Productions is proud to announce the start of a brand new action adventure series from writer Teel James Glenn.

Jon Shadows is a freelance bodyguard and investigator. When his ex-lover, Maria, tells him her billionaire husband, William Carter, is trying to kill her, he can’t help but come to her aid. Shadows’ plan is to attend an annual corporate employee meeting on Carter’s private island and do some digging.

He soon discovers the eccentric computer mogul has ominous ties to the Japanese crime syndicate known as the Yukaza and is already being investigated by the Securities and Exchange Commission. But before Shadows can make sense of the data, a close friend is brutally murdered and it looks like he is slated to be the killer’s next target.

In Jon Shadows, award winning writer, Teel James Glenn, has created a terrific new hero with echoes of the classic ala the Saint and James Bond. In the end, Jon’s enemies soon learn “Killing Shadows” is no easy matter.

Now available from Amazon in paperback and soon on Kindle.