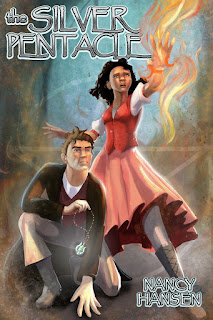 In the far distant future the Earth has long been abandoned with the majority of mankind traveling to the stars to discover new worlds. Whereas old hatreds continue to fester among those who remain until a global nuclear war lays waste to everything. Hundreds of years later a demigod named Jordyn Orion descends on what remains to discover new human enclaves have sprung up among which are men and women possessing strange, supernatural abilities.

One of these is the young fire-starter Aleta Kalama and together they battle the Angel of Death in the ruins of a once great Metropolis. Later they join forces with a lovely Wind Shaper to take on a merciless sea pirate known as Crazy Katy.

“The old phrase about throwing everything into the mix including the kitchen sink was the reaction I had when reading this book,” reports Airship 27’s Managing Editor Ron Fortier. “Nancy Hansen is a treasure to the New Pulp community and her work is always fresh, exciting and above all else original. ‘Silver Pentacle’ is nothing like her previous works and we are very excited to be bringing it to her legions of readers.”

Master Storyteller Nancy Hansen launches her most imaginative series yet in “The Silver Pentacle.” These are fantastic tales from a time and place lost to the future.

Colorado based artist Guy Davis provides both the interior illustrations and the painted cover, while book design was handled by Art Director Rob Davis.