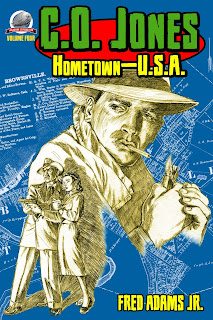 When things in L.A. get a little too hot for C.O. Jones, a change of scenery is in order and he’s only to happy to return to Brownsville, PA at the summons of his old boss, Mobster Skitch Mottola.   Several unknown men have attacked local business to include a half-hearted attempt on the bank. All the incidents seem random and unconnected, but Skitch believes another gang is attempting to surreptitiously take over his territory by causing criminal mischief. He wants Jones to find out who they are, who they work for and how to stop them.

It seems simple enough until Jones recognizes the attacks perpetrated by these mystery men are all familiar military tactics and he comes to the startling conclusion that the group they are dealing with is made up of war veterans. Now things are really going to get complicated.

Available now from Amazon in paperback and on Kindle.